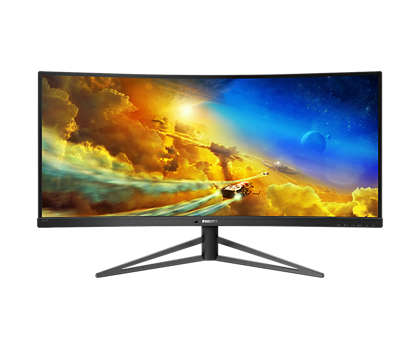 Philip has announced the 345M1CR Momentum, which is a 34-inch gaming monitor that has a resolution of 3440 x 1440 and a refresh rate of 144 Hz. This monitor also features support for Philips multi-window alongside the HDR support. Philips has stated that this ultrawide monitor is designed to be used with Consoles, not with PCs. Sadly, Philips has not announced the price or the release date for this monitor at this point.

Philip has announced the 345M1CR Momentum gaming monitor, which is a 34-inch Ultrawide monitor that has been seemingly designed for the next generation of gaming consoles

Philip's 345M1CR Momentum features a curved 34-inch display, which allows players to get more immersed in the game that they are playing. The high-density pixels, as well as the 178/178 wide viewing angles, allows the 21:9 aspect ratio to offer more overall screen space when compared to conventional monitors that feature a 16:9 aspect ratio.

This monitor also features support for HDR (or High Dynamic Range), which allows for fantastic brightness and fantastic colors. HDR makes the images on this monitor appear much closer to real life. This monitor also features support for Philips Flicker-free technology, and this technology applies new solutions to adjust the brightness of the monitor while still reducing the flick created by the LED backlight. This technology allows the user to view the monitor for a much longer time.

This display features a 144 Hz, which is significantly higher than any refresh rate supported by consoles. The more recent consoles only supporting up to a 60 Hz refresh rate, since both the upcoming Xbox Series X and PS5 features can play games with up to a 4K resolution at up to a 120 Hz refresh rate.

This monitor feature support for Philips multi-window, which allows for Picture-in-Picture mode as well as Picture-by-Picture allowing two input devices to be shown on this display at once.

For connectivity, this monitor features two HDMI 2.0 ports along with two DisplayPort. Alongside those ports, this monitor also features a USB Hub, which makes use of a single USB-B port that allows this hub to feature four USB 3.2 ports with one of those ports featuring fast charging support.