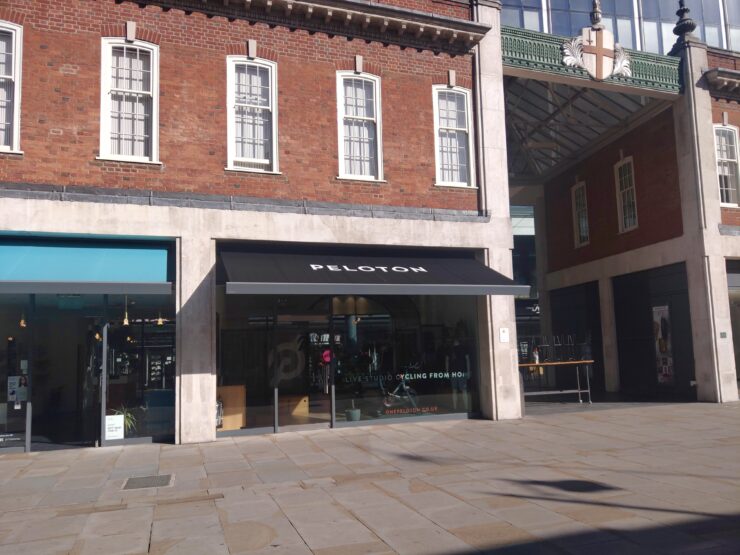 Peloton's Shop in the City of London. Expensive, prime real-estate...

Peloton (NASDAQ:PTON), an indoor fitness brand which aims to reduce reliance on physical gyms to take part in exercise classes by offering connected equipment, received a cold shoulder from investors as it listed on the NASDAQ stock exchange. The debut floundered in a spectacular fashion as the company’s stock price closed at $25.76, marking an 11.2 percent decline and leading some experts to question the aggressiveness of the company’s IPO pricing strategy.

The company's IPO had a placing price of $29, but the stock commenced trading at $27 on public markets, thereby, giving the company a market capitalization of $7.7 billion with 286 million shares outstanding. Peloton was able to raise $1.3 billion through the IPO. According to Dealogic, the company’s IPO performance ranked nearly at the bottom when compared against all other IPOs that raised at least $500 million this year. Only SmileDirectClub Inc. (NASDAQ:SDC) gave a more abysmal IPO performance with its share price declining by a whopping 28 percent during the debut. Moreover, Uber’s (NYSE:UBER) IPO slump of 7.6 percent now ranks as the third worst public offering flop this year.

In an interview with Barron’s on Thursday, Peloton Chief Financial Officer Jill Woodworth commented on the company’s IPO performance in the following manner: “Like everyone, we’ve been watching some of the market—the IPO market specifically. The overall macro market started to deteriorate over the last couple of weeks or so. And certainly you see that when you talk to investors on the road.” She went on to add that, “I think there’s just a healthy skepticism in the market right now overall.”

Peloton’s precarious cash flows constitute a major factor behind the lukewarm reception accorded to the company by investors. For the fiscal year that ended in June 2019, the company reported that its revenue increased by 110 percent year-over-year to $915 million. However, the company reported a net loss of $195.6 million for the year which represents a nearly 400 percent increase from the loss of $47.8 million in the previous year. Of course, the unicorn’s penchant for renting high-end properties in posh localities may have been an important contributing factor to its vociferous cash burn problem. Its growing losses run counter to the assertion by John Foley, the company’s CEO, in a 2018 interview with CNBC that the company is "weirdly profitable."

Peloton was founded in 2012 by a group of five individuals that included John Foley - the former President of Barnes and Noble’s e-commerce division - as well as Tom Cortese, Hisao Kushi, Yony Feng, and Graham Stanton. The company specializes in selling stationary bikes and treadmills with internet-connected tablets that stream live and on-demand classes. As of June 30th 2019, Peloton boasted of 511,000 “connected fitness subscribers” with about 1.4 million people possessing an account with the company. Moreover, it sells bikes for $2,245 and treadmills for $4,295 each while a subscription to the company’s streaming content costs $39 per month.

Following the disastrous Peloton IPO, the Endeavour Group Holdings Inc. cancelled its plans to go public. This development follows the widely reported news that WeWork, the embattled workspace provider, was forced to delay its IPO as investors grew increasingly wary of the company’s profitability prospects amid furor over the antics of the company’s co-founder, Adam Neumann. In order to salvage the IPO, Mr. Neumann resigned last week (read our previous coverage here). However, the investor sentiment had soured to such an extent that the company found it impossible to go public at this time.

This year was dubbed the year of unicorn IPOs. But given the realities of late-cycle economic expansion coupled with uncertainties surrounding the U.S. – China trade war, investors have grown cautious of late, particularly, regarding businesses that stand on shaky financial footing. Even so, companies have raised $52.7 billion through IPOs this year, according to Dealogic. This level of market exuberance was exceeded recently only in 2014 when companies managed to raise $77 billion through public offerings. Nevertheless, given the prevailing negative sentiment towards stock exchange listings, the rest of the calendar year is bound to turn more somber for companies looking at this avenue to meet their funding requirements.

Keep in mind though that companies want to go public at the peak of the market while valuations are high. Even if they take a slightly lower placing price but can get in before any possible ramifications from the trade war or Fed repo interventions hit in the form of a market route or recession, the cash will last them longer than it would if it happened after. A high stakes game indeed.