I'm a very impressionable person, I'll admit that. If I think a character is cool as all hell, I'm going to live my life based on them. That's why I still believe that Scooby Snacks are the most nutritional part of a healthy diet.  It's also why I tend to believe in two statements made by two fantastic characters: Jack Reacher has made it clear that it's always ideal to "hope for the best, plan for the worst" and Stone Cold Steve Austin also made the statement of "D.T.A. - Don't Trust Anyone". Little did Mr Austin know that it's perfect advice for Paranoia: Happiness is Mandatory.

Maybe, just maybe, the word Paranoia in the game's title gives it away a little. 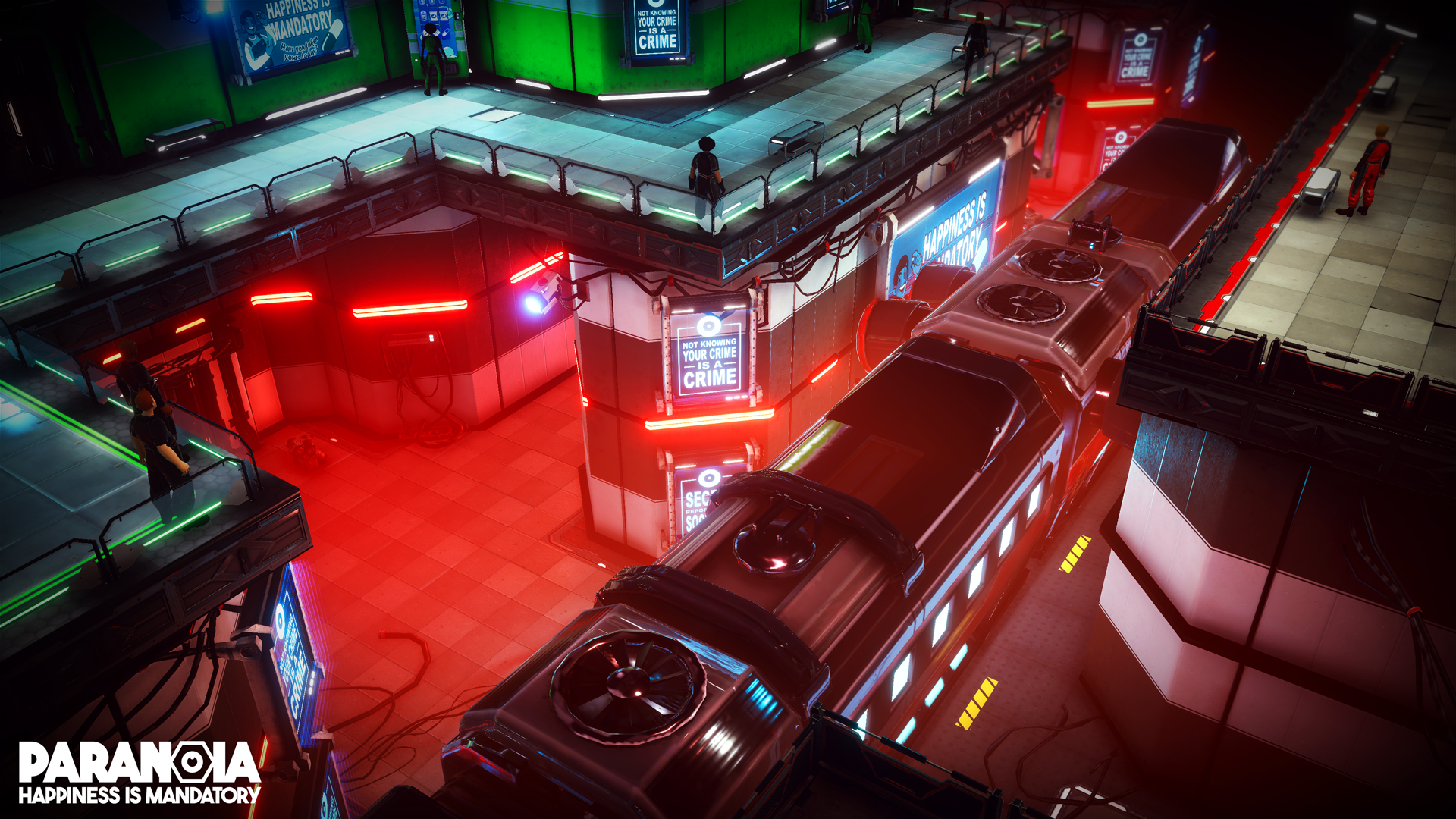 The setting of Paranoia: Happiness is Mandatory is set in a place called Alpha Complex, a futuristic building-city completely overseen by the AI controlled Friend Computer. Not only are they overseen by an all-powerful AI, but they're also unaware of anything in the outside world. Friend Computer has some fairly explicit instructions. One, as you may guess, is that happiness is mandatory. Another is that to even think about what is beyond Alpha Complex is completely against the rules. There is also the fact that to step outside the areas allotted to your social class is forbidden.

I doubt I'd be one of Friend Computer's favourite subjects. One, I'm always fairly suspicious of anybody telling me that I should be happy. Don't tell me how I should feel, I'm from the north of England, the miserable part of a country known for misery and discomfort. Being from the north of England, I am likely also against friend computer in one other way: Friend Computer states that mutants are not to be trusted. Judging by how those in charge of the UK treat those north of the Watford Gap, we must be mutants.

This isn't to say that the overseeing computer, the one that actively mistrusts you with its cameras watching your every movement, isn't at least benevolent in its own way. Should your character die in Paranoia, you'll actually have a few extra lives to live. Five to be precise. This is because Friend Computer is nice enough to have made five clones for all who live in Alpha Complex. When you're reborn, the slate is also wiped clean so any suspicion is wiped clean. 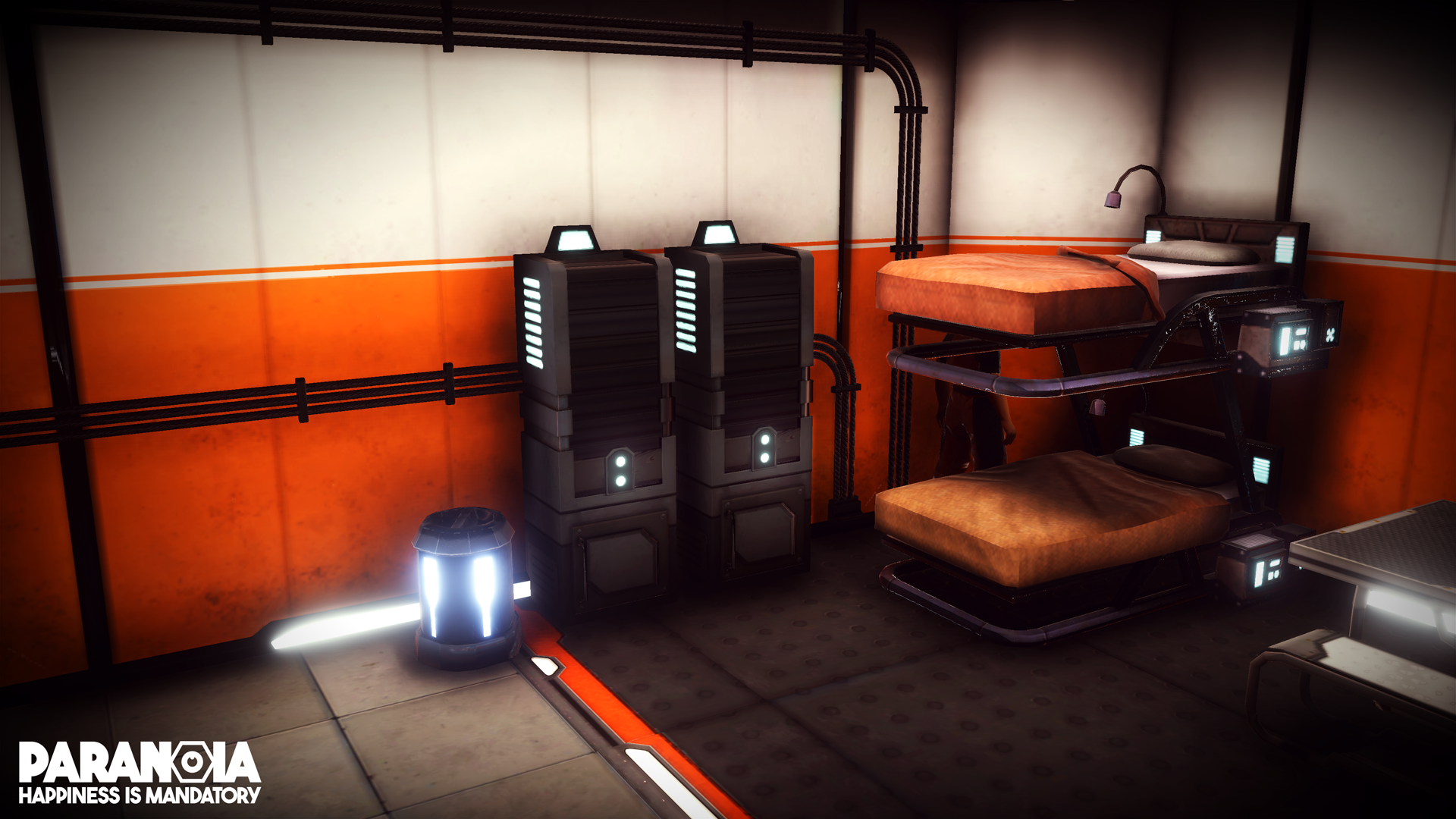 I suppose Friend Computer isn't the smartest AI around though, because you are a mutant after all. When you get started, you're given a random mutation. Each time you die and are brought back, your mutation is also changed randomly. Fortunately, any experience you've gained in your life is also carried on, letting you respec your skills which is handy as your experience while dying could have also unlocked different skills for you to pick up. It doesn't seem you'll be able to retain and respec team members who die though, getting new people instead. Though I may be wrong about that.

What I do know is that you will have a few characters joining you, assigned by Friend Computer to join the task force you lead called the Troubleshooters. Only this links into the quote I gave you by one Stone Cold Steve Austin. You can't trust these characters any more than you can trust Friend Computer. Should you do something wrong, even while defending the rules set by Friend Computer, it will be more suspicious of you. If Friend Computer can't see you, the characters sent to join you may just go and tell on you after the mission.

It all adds up to an interesting world, all set in one complex. A society based around colour-coded classes, full of people you can't trust and an overbearing computer. A computer that assigns a treason level to you, keeping you monitored, though you can lower it should you make the right decisions when going about your business. From what I was told, you'll have a wide variety of dialogue options, including intimidation, bluffing and bureaucracy to push the conversation. Also, you'll have multiple decisions to make along the way, such as the ability to join secret societies, which will directly impact the ending of the game.

It is worth noting that the game is linear, moving into missions from a central hub. In this hub, you will be able to roam around as needed, with areas like R&D that invent things you have the choice to use. Also, there will be vending machines for you to buy items from, different ways to make and spend money, with you also having the ability to make money during the missions and gathering a decent amount of loot along the way. You'll want to make sure you pick it up though. If Friend Computer can see it on the floor, it'll send little robots to clean it up, seeing it as rubbish. 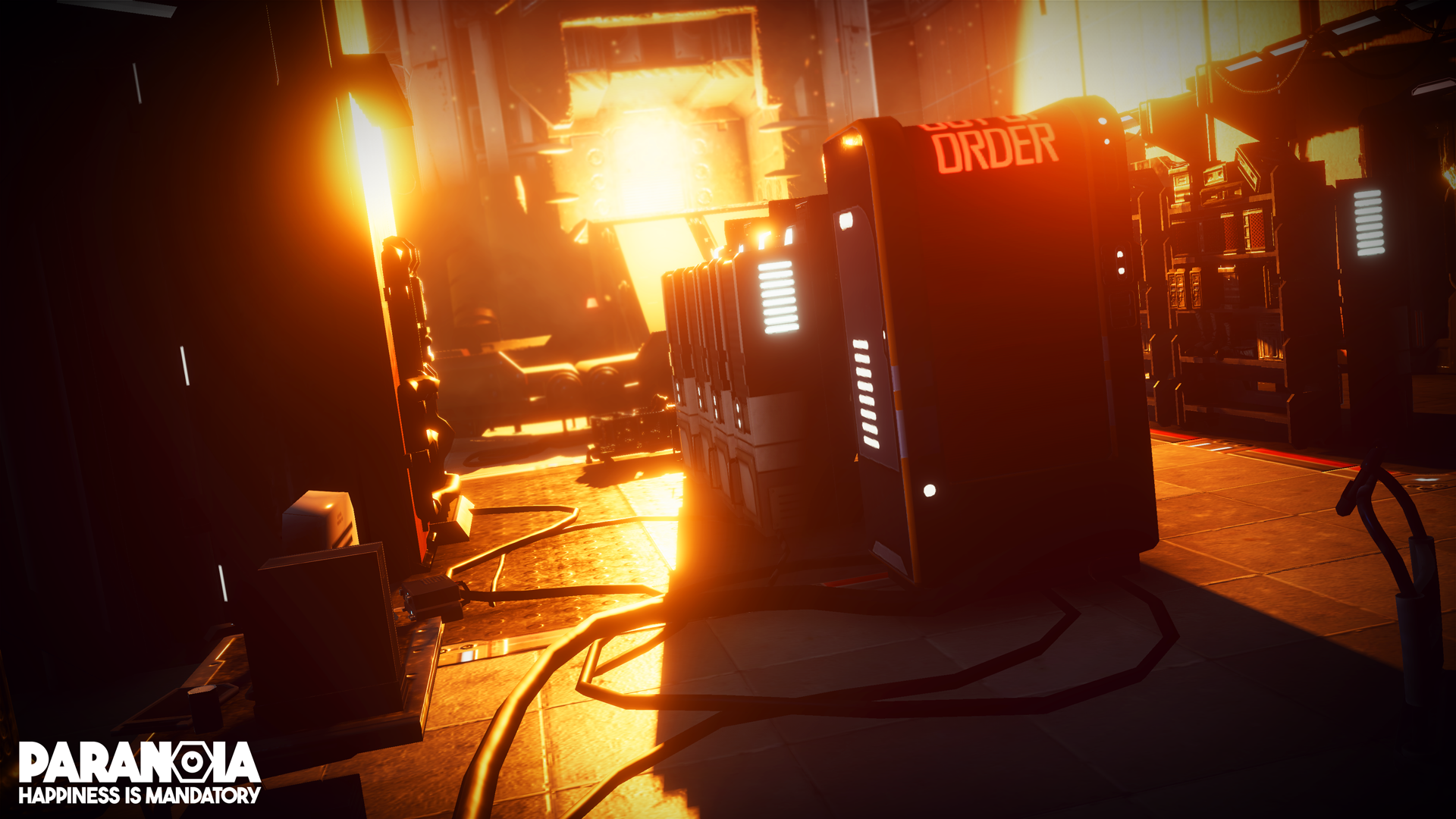 All of this takes place as a squad-based tactical RPG in a game that looks great, having a cartoon-like cel-shaded design. This, by nature, runs contrary to the oppressive atmosphere as well as a number of fairly strong subject matters that feature in the game, such as drugs and death, though it keeps a sense of humour. The one mission I was shown is about exploring an area taken over by a sort of cult obsessed with creating an actual Dungeons and Dragons quest for them to play through, not that they know it's D&D.

Paranoia: Happiness is Mandatory is a game I was very interested in checking out when I knew it was going to be at the Bigben Interactive Week. It didn't disappoint. There's something about the different dystopian environments that interest me, such as with Mirror's Edge. Only here, you're breaking the rules while trying to maintain the appearance of being a stand-up guy or gal. All in what is a fairly light-hearted dystopian universe. Granted, this doesn't mean it can't get cruel.

Being developed by Cyanide (Of Orcs and Men, Styx titles & Blood Bowl titles) and Black Shamrock (assisted with Starlink: Battle for Atlas), Paranoia: Happiness is Mandatory is certainly looking like an interesting game. The combat looks compelling, aiming to be true to the original tabletop RPG and also having a decent level of challenge. What is possibly more important is that to remain true to the original IP, the ones who made the tabletop RPG work with the developers, particularly on the story and text. At the moment they're aiming for a PC, PS4 and Xbox One release between September to December this year, with the game getting a full launch instead of early access.