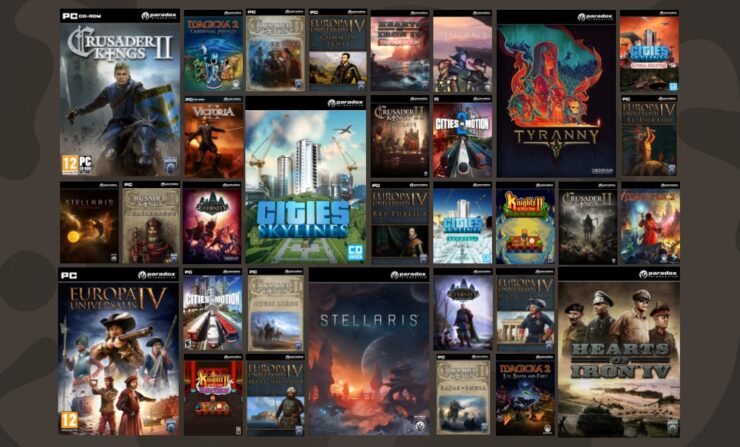 Paradox Interactive (FRA:ETA) aren't the largest publisher in gaming by even a close amount. Starting as a niche developer, the company has expanded considerably with franchises like Hearts of Iron, Europa Universalis and Crusader Kings. Beyond merely self-publishing, Paradox have teamed up with both small and large developers to publish successful games like Colossal Order's Cities: Skylines and Obsidian Entertainment's Pillars of Eternity. Even PDXCon, what was a gathering for developers and the media, will now open its doors to fans for the first time this year.

The growth of the company is best exemplified by expansion and acquisitions over time, particularly last years purchase of White Wolf. Their move into publishing also came with investing in smaller indie games like the runaway success Magicka as well as the previously mentioned Cities: Skylines. What also helps them stand out from the rest is just how open and frank they are with the customers, which has generated tremendous amounts of loyalty and goodwill.

What may be a surprise is that it was only last year that the company offered up 15.5% of its shares in an IPO. Listing on Nasdaq First North, the largest of the new shareholders is Tencent (HKG:0700), buying 5% of the company. The announcement by Stephen Ma, head of Tencent's game publishing department explains the core reasoning:  “As China’s game market further develops, players will advance to more sophisticated and complex genres such as grand strategy and simulation games.  I have spent many hours in Hearts of Iron 2, and believe our rich social resources can help Paradox build up loyal fan bases in China.”

This leads into Paradox Interactive's first Year-end report as a public company and the figures are good.

A Year in Review

Paradox Interactive have had a good year and a particularly strong fourth quarter as indicated by their report. The fourth quarter's strength can be attributed towards the release of Tyranny as well as DLC/Expansions for Europa Universalis IV, Hearts of Iron IV, Cities: Skylines and Stellaris. This particularly stacked quarter led to a year on year increase of 96% in operating profit, raising from SEK 43.7 million ($4.9m) to SEK 86m ($9.7m).

Over time the company's position has allowed it to become cash rich as well as increase it's asset base. Such examples of this was with the purchase of White Wolf and all of its properties. White Wolf as a subsidiary is currently acting as a separate company. Of course, any successful move benefits Paradox. White Wolf are already looking to resurrect their popular World of Darkness series in gaming form, with the company teaming up with publisher Focus Home Interactive and developer Cyanide Studio to release Werewolf: The Apocalypse.

Tencent's (HKG:0700) interest in Paradox Interactive (FRA:ETA), plus a recent deal with the company for Paradox's games to be released in the Chinese market on Tencent's own platforms offers a large possibility for growth. Combine this with the companies predilection to garner community support, expand and also take risks on games, a considerable number of which pan out, and the future is looking bright.

To quote CEO Fredrik Wester "We are cash flow positive and already have a good cash position, enabling us to do larger investments and look at interesting acquisitions. However, it’s important to stress that we are in no hurry, making the right decisions for Paradox of today and Paradox of tomorrow is the priority above all." which indicates more than anything, the approach that Paradox will continue in the future.

What remains the company's largest strength are the core franchises it relies on, but also the long tail that they have all featured. This comes from large numbers of DLC that sell well, due to the niche, but growing fan-bases of games like Europa Universalis and Hearts of Iron. The Grand Strategy genre is one rarely covered by larger companies, which has led to Paradox securing a strong position and arguably the two largest franchises of the genre.

While not the largest publisher out there, and relatively modest in comparison to the largest in the sector, Paradox Interactive is a company worth tracking. Strong year-on-year growth, a loyal fan base and control of a genre, however niche it may be, while allowing core franchises to draw in new fans while capitalising on links to new markets offers great promise for the future.