NASA has just released some more images taken by the New Horizons spacecraft and this new batch of photos is stunning. The photos show a breathtaking view of the dwarf planet Pluto’s icy mountains, streams of frozen nitrogen and low-lying hazes in great detail due to the high-resolution.

The photos showcase a rather familiar artic look of the dwarf planet as the backlighting from the Sun shines through the hazy atmosphere. This new view of Pluto’s crescent was taken by the New Horizons’ wide-angle Ralph/Multispectral Visual Imaging Camera (MVIC) on the 14th of July and due to reasons mentioned in my previous article we didn’t receive the photographs until the 13th of September.

The picture highlights Pluto’s varied terrains and atmosphere and covers 780 miles across the surface of Pluto. It captured a part of the Sputnik Planum, Pluto’s irregular segmented surface, as well as mountain ranges around it. 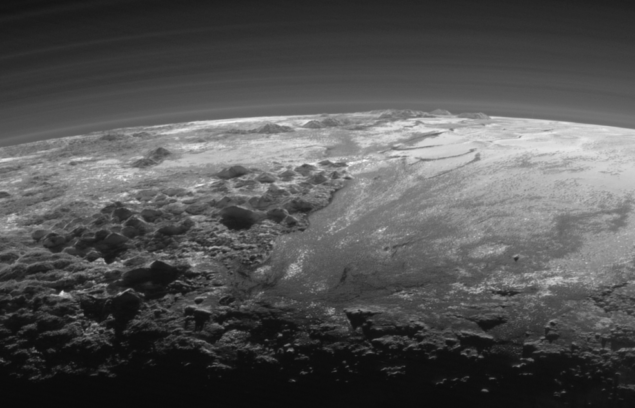 “This image really makes you feel you are there, at Pluto, surveying the landscape for yourself,” said New Horizons Principal Investigator Alan Stern, of the Southwest Research Institute, Boulder, Colorado. “But this image is also a scientific bonanza, revealing new details about Pluto’s atmosphere, mountains, glaciers and plains.”

Due to the high-resolution and supporting backlighting the image taken by the MVIC revealed some new details of the nitrogen atmosphere of Pluto. The image clearly shows the hazy thin layers of the nitrogen atmosphere near the start of the ground up to 60 miles above ground. The image also shows Pluto’s low-lying haze which was illuminated by the sun. Lead of the New Horizons Composition team from Lowell Observatory, Flagstaff, Arizona, Will Grundy said about this:

"In addition to being visually stunning, these low-lying hazes hint at the weather changing from day to day on Pluto, just like it does here on Earth,"

Compared to other photos the new ones are more visually stunning and show evidence of a ‘hydrological’ cycle on Pluto similar to one on Earth. The only difference is that on Pluto instead of water ice there is nitrogen and soft ices.

"We did not expect to find hints of a nitrogen-based glacial cycle on Pluto operating in the frigid conditions of the outer solar system,” said Alan Howard, a member of the mission’s Geology, Geophysics and Imaging team from the University of Virginia, Charlottesville. “Driven by dim sunlight, this would be directly comparable to the hydrological cycle that feeds ice caps on Earth, where water is evaporated from the oceans, falls as snow, and returns to the seas through glacial flow.”

“Pluto is surprisingly Earth-like in this regard,” added Stern, “and no one predicted it.”

The new Ralph imager panorama also shows glaciers flowing back into the Sputnik Planum from a blanketed region and these are weirdly similar to frozen streams on the margins of ice caps of Greenland and Antarctica. NASA will be releasing a more pictures soon and we will keep you updated till then enjoy these spectacular views of the icy dwarf planet.