Wipeout, F Zero, Fast RMX, and a whole fleet of others I'm forgetting. The futuristic, fast, and floaty racing game is basically its own genre at this point, and all newcomers are welcome to join in. While at Gamescom 2019 in Germany this year, the latest racer I got my hands on was Pacer.

I was sat down and told which stage would be easiest, and I raced through. The game plays much like all of the other games I mentioned and visually is very impressive, along the lines of Wipeout Omega Collection for PS4. That means everything is crisp and beautiful, with the track itself glowing with a blue aura as you pass over the anti-gravity sections which twist around the backgrounds of the stage. Light bounces off the track, revealing it's slick surface. It's a very pretty game, there's no doubt about that.

The backgrounds, especially in the busier city areas, and something you want to slow down and marvel at, as a decent amount of care and attention has been paid to make these areas come to life. But slowing down isn't much of an option, because this is a racing game, and you want to stay ahead. I've played a lot of futuristic, anti-gravity racing games in the past, but I found Pacer difficult, even though I was just playing against AI opponents. Playing against real players online will only get tougher.

It was probably just the limited amount of time I had with the demo, playing a handful of tracks, but I couldn't quite get a good grasp on how to perfectly use the brake to get around corners and get back into the race. I tried braking at different times and drifting into place before boosting away, but nothing quite seemed right, though that could absolutely be me. 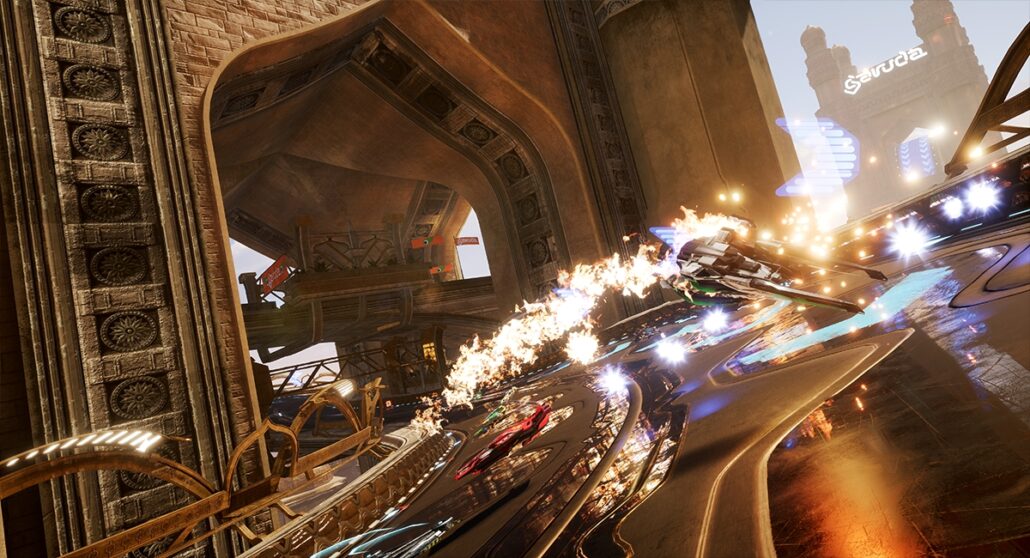 Though racing isn't all you need to worry about. You will also be collecting power-ups and weapons to use against your enemies, in a Mario Kart style twist that usually doesn't make it into these anti-gravity games. That means your racing skills have to be on point, but you also need to be good at attacking and defending against those enemy crafts on the track. That will spice up multiplayer sessions, no doubt about it.

But there's only one challenge I want to master. In between races, I decided to take a look at the difficulty settings and found the very fastest, hardest mode, which turns the speed of the game up for everyone involved. I have played so much Mario Kart 8 in 200cc, I didn't think anything could scare me anymore. Then I played this.

I died. Every mild corner, I collided with it. Quickly the enemy crafts were far ahead, and I was crashing so much I lost all my health and died. It's as simple as that. It went very, very badly. But it's that experience that makes me want to come back and play again, to master that insidious mode. Or at least get some practice in on the easier modes first.

Pacer is, so far, a darn fine anti-gravity racing game, one which can offer an absurdly steep challenge, and one definitely worth looking out for. The game is set to launch later this year on PC, PlayStation 4 and Xbox One.