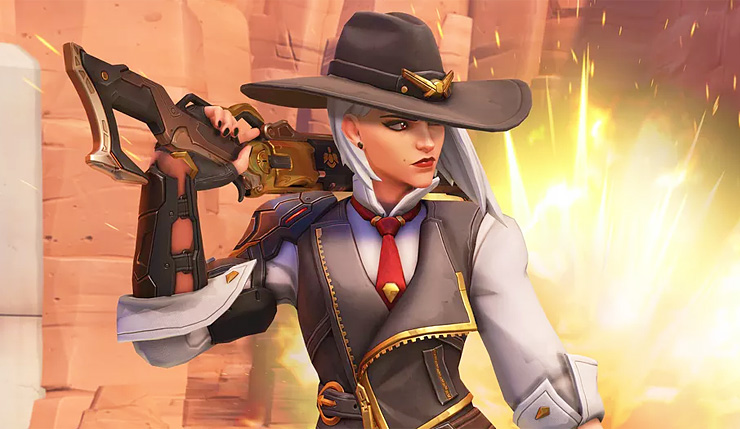 That latest Overwatch patch is here, and it includes new hero, Ashe. The character, who was unveiled during the BlizzCon 2018 Opening Ceremony is a long-range Damage Hero, who wields a semi-automatic rifle and is backed up by her trusty Omnic sidekick, B.O.B. You can learn more about Ashe right here.

In addition to bringing Ashe to the masses (she’s been available on the PTR for the past week), the new update rebalances several Heroes, including Mercy, Reaper, Roadhog, and Symmetra. You can get the rundown on their changes, below.

Developer Comments: Mercy's ultimate was charging a bit too slowly after her base healing was reduced in a previous update. These changes should restore some of her ultimate’s strength and let it build up more quickly.

Developer Comments: Reaper's specialty is fighting at a very close range. The more consistent spread pattern and increase in healing from his passive ability will make him more capable of standing toe-to-toe with his enemies.

Developer Comments: It's still difficult to use Symmetra's Photon Projector beam effectively, even after its range was increased. By speeding up the primary fire charge rate, it takes less time to ramp up to its full damage potential and will be a stronger option when she’s presented with targets to charge up on.

Developer Comments: Roadhog is receiving several large changes to make his abilities more consistent. His Chain Hook had issues with breaking when enemy targets jumped or fell behind environment collision. It will now slow them down in the air more when the hook lands, and wait less time before it starts reeling them in. Since Chain Hook’s cooldown now begins immediately upon use, so it no longer varies based on Roadhog’s distance to the hook target. We’ve also moved some of the projectiles closer to the center of the spread pattern on his Scrap Gun, which gives him a more consistent damage output for its primary and alternate fire. Previously, there was a long-standing bug that caused close-range targets to fly much further than expected. After this bug was fixed, we still wanted to keep some of the knockback burst it provided, so we’ve increased the overall velocity cap to maintain some of that functionality.

Here are some other changes included in update 1.30:

If you need to know about every minor bug fix included in Overwatch update 1.30, you can check out the full, unabridged patch notes here.

Overwatch is available on PC, Xbox One, and PS4.