With Google getting an unofficial launch date of October 15th, Apple has officially sent out invites for it's next event. The event is going to take place in the Town Hall auditorium in Apple's Cupertino campus on next Thursday i.e. October 16th.

October 16th is a date that was also reported 5 days back and Apple has confirmed this information by sending out invites. The event will start at 1 PM ET and 10 AM PT as usual. Apple is expected to introduce two new iPads, a new 27-inch iMac with Retina and 5K display. 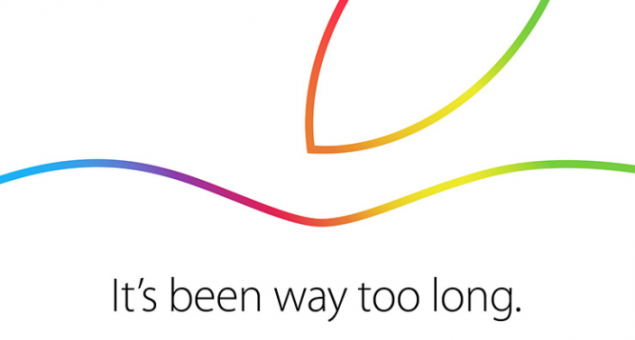 The iPads are expected to come with incremental upgrades on board. The iPad Air 2 and the Retina iPad mini are expected to get Touch ID and Apple's latest A8 as the processor. In addition, both the devices are expected to feature a thinner form factor as well as a gold option to go with silver and space gray.

The iPad Air 2 is also expected to come with minimal design changes such as redesigned volume buttons and a single line speaker grille owing to the thinner form factor. Apart form the iPads, Apple is also expected to show off a 27 inch Retina 5K iMac and OS X Yosemite. The Retina iMac will be the first time Apple will be introducing high resolution to it's desktop offering.

Besides the iPads, iMac and OS X, Apple can also be expected to talk about other services. These include the much anticipated Apple Pay which will come with iOS 8.1. Since the iPads have also been rumored to get Apple Pay through Touch ID, so it wouldn't come as a surprise that Cupertino ends up demoing it's mobile payment service in detail alongside the iPads' launch. So stay tuned for Thursday folks.