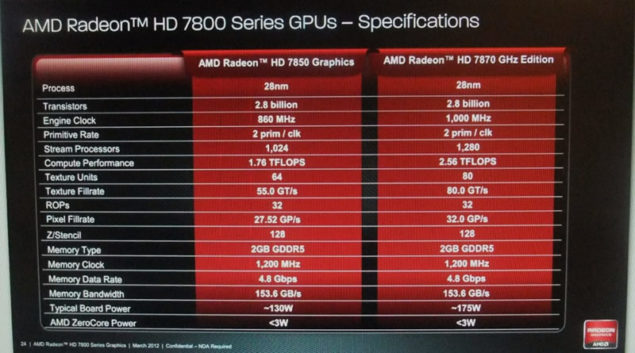 The Radeon HD7870 would be a Ghz Edition GPU which means it would be stock clocked at 1000Mhz. The GPU core would consist of 2.8Billion Transistors, 1280 Stream Processors, 80 Texture Units, 32 ROP's. The card would include a 2GB GDDR5 memory clocked at 1200Mhz equaling around 4.8Gbps Data Rate and a bandwidth of 153.6Gbps. Total Compute performance is 2.56 TFlops, TDP would be around 175W and less than 3W while operating at ZeroCore Power mode.

There's also said to be a 1GB Version of the card which would launch in March:

The Radeon HD7800 Series will be launching within this month around 15th March, Launch of the flagship HD7990 is also expected later in March as revealed in MSI's leaked slide here.