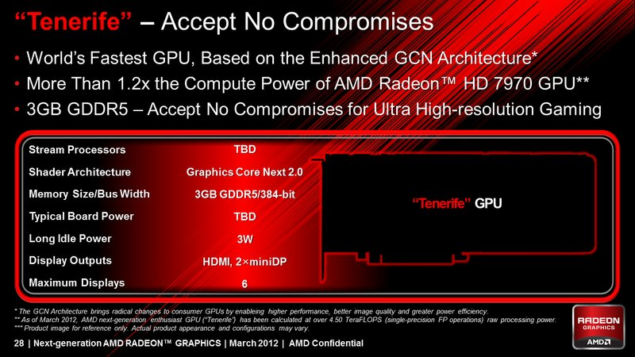 AMD is gearing up to launch its final GCN based HD7800 GPU's this month and we have already got the first details on the Tenerife GPU which would be part of AMD's Sea Island based HD8000 Series GPU featuring the enhanced/refined version of the Graphics core next Architecture.

As you can see from the leaked slide, Tenerife would be an Enthusiast level product replacing the current flagship HD7970 GPU so we can assume that it would be called HD8970. It is said to feature 2304 Stream Processors, 128TMU's and 48 ROP's which would result in over 4.50 TFLOPS of processing power and over 20% better compute performance compared to HD7970. Display outputs include an HDMI and 2 x MiniDisplay ports, DVI is not listed however the card is suggested to support a maximum of 6 displays.

A 3GB 384-bit wide memory buffer would operate at 6Ghz with a total memory bandwidth of around 322GB/s. Core clock speeds are unknown since the product is still far away from launch. However a TDP of 250W and idle ZeroPower of 3W is expected. Expect the launch of the next flagship around Q1 2013 or early in Q4 2012.

In other news, OBR reports that the HD7000 series based Dual chip GPU could be postponed or entirely cancelled from launch schedule since AMD still can't manufacture a cooler for the card to keep it within thermal specs.