Unlike traditional fan controllers that are installed on the front of the case in the 5.5" drives, the Sentry LXE can be connected through a PCI interface and kept atop your desktop. Priced at $60, the controller should be a very well priced addition to NZXT's existing lineup. 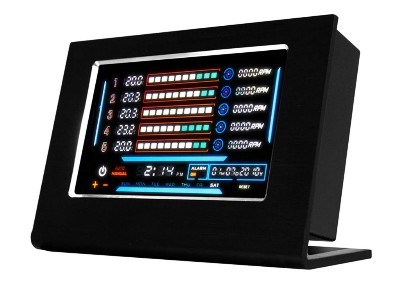 One of the best features for the fan controller is that it has a touch sensitive screen, so it should be easier to use. The controller is bigger than normal fan controllers, it has has 5 temperature sensors to check on thermal conditions at specific places in a case.

You can hook up up-to 5 fans to the case and program them to change speed according to the temperature in the case to ensure balance between proper cooling and low noise. It can even be used to set alarms that come on when a specific temperature is reached inside the case.