NVIDIA's upcoming flagship Maxwell based GM200 GPU core has been spotted by Videocardz showcasing that the chip has been finalized and will soon be entering mass production to be incorporated in several Quadro and GeForce graphics cards. The leak regarding the GM200 GPU core comes just a few days after it was reported that NVIDIA might have a Quadro M6000 card coming out with 12 GB VRAM but now it seems to be confirmed. 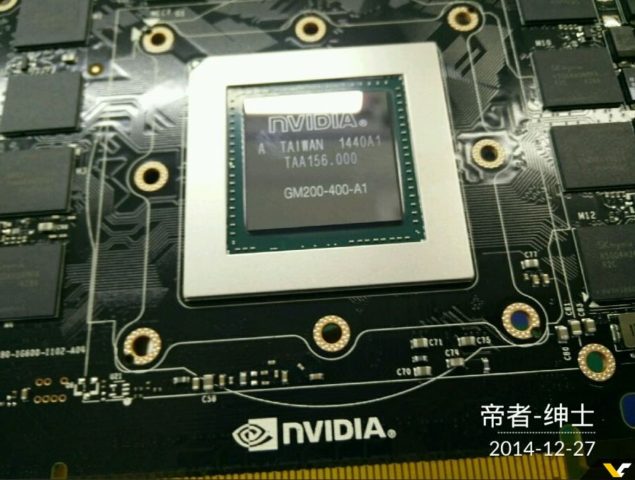 The leak from the site was tipped by a company employee who was working at the manufacturing labs where the GM200 GPUs are being produced in mass quantity to meet demand of users over the next month. While there are no specifications or shots of the full board, these single leak confirms that NVIDIA's GM200 GPU is ready and ongoing full production at NVIDIA. Some specifications reveal that the flagship Maxwell core will be using the  PG600 board that has a codename of 180-1G600-1102-A04. While it is supposedly going to make way into professional Quadro cards first, there's no mystery that this chip will also be integrated in new and upcoming GeForce graphics cards such as the elusive GeForce GTX Titan successor.

However, one thing we cannot confirm at this moment is which market does it belong to so it could be either a GeForce or a Quadro variant. The rest of the board shows 24 Hynix H5GQ4H24MFR memory chips which are the same ones used on GeForce GTX 980 and GeForce GTX 970, clocked at 7 GHz. We are most definitely looking at a 384-bit bus if earlier leaks are concerned. The Hynix memory chip are amazing in terms of OC and stability giving large amounts of bandwidth and performance to users. The reference board comes with two SLI goldfingers and display outputs include three Display ports and a single HDMI 2.0 port. It seems like the board sample doesn't include the DVI port at the moment but we can see the connectors for the port are in place and we will be looking at a similar display configuration as other NVIDIA Maxwell graphics cards.

One of the most surprising thing about the GM200 GPU is that it's massive in terms of die size. Whereas Kepler GK110 had a die of 561mm2, the GM200 seems to be just around 600mm2 . The die is surrounded by a metallic plate heatspreader and looks the same as the GK110. The chip is codenamed the TAA156.000 (1440A1) or the GM200-400-A1. It's hard to say if this will be the flagship GM200 SKU. A round up of the earlier leaked specs show that the GM200 GPU features 3072 CUDA Core, up from 2048 on the current GM204 chip. Considering a Maxwell SMM has 128 streaming processors, there’s a total of 24 SMM units enabled on the GM200 chip which is going to be fused on the Quadro M6000 GPU. Aside from that, we are looking at 96 Raster operation units and 192/256 TMUs. The card has a pixel fillrate of 94.8 GPixels/s and a texture fillrate of 252.9 GTexels/s. The GPU’s clock speeds are maintained at 988 MHz and doesn’t feature GPU Boost although these could be preliminary clock speeds and could be changed in the future when the card is officially launched. On the memory side, we are looking at no less than 12 GB GDDR5 VRAM since it replaces the K6000 which featured the same buffer size. The card comes with a 384-bit memory interface and memory clock is maintaned at 6.6 GHz that pumps out 317.4 GB/s.

The NVIDIA GM200 GPU that launches in the upcoming months will be facing competition against AMD's own 300W Juggernaut chip which will be supporting HBM memory. Currently, both NVIDIA and AMD are producing high-performance 28nm chips which will deliver a great competition in 2015.