Nvidia To Showcase GTX 680M At Computex 2012 This June

As reported by VideoCardz.com, Nvidia is soon to showcase its mobile GTX 680M chip at Computex 2012 this June that doesn’t even have half of the CUDA core count of its desktop GK104 brother, the GTX 680.

Rumors are circulating around that the GTX 680M will only have 744 CUDA cores whereas others have been suggesting the count to be around 768 cores. On the other hand, the GPU will pack 4GB of GDDR5 memory across a 256 bit interface.

Power consumption has been rated around 100W. This chip has been labeled as the second revision of the N13E-GTX 680M chip on the A2 silicon. The card will come with SLI support as well as DirectX 11.1 support.

Performance wise as you can see, the card manages to perform 37% faster than its lower GTX 670M partner that has been based on the Fermi architecture. 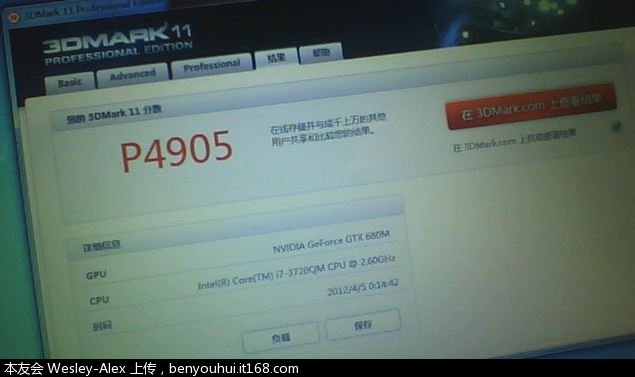 According to a leaked screenshot taken from a Chinese website, the card manages to reach a score of P4905 on 3D Mark 11 on the performance preset.