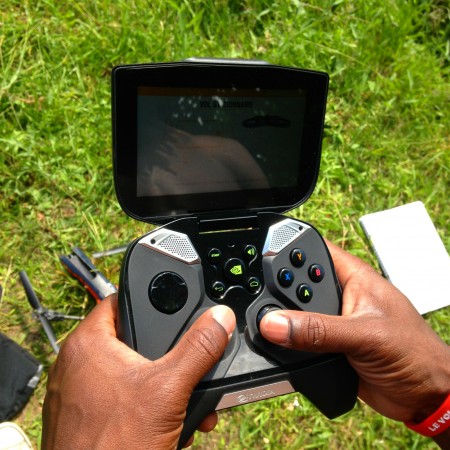 It looks like the wait is over. Nividia is finally ready to cast off the veil and unleash the SHIELD. While that may sound a bit oxymoronic. It's exactly what's cooking down here in Silicon Valley as Nvidia's very first retail product gets an new official release date. Last we heard... Nividia Shield was suffering from "Some final quality-assurance testing..." which unfortunately "...turned up a mechanical issue..." The blame was placed on on an internal 3rd party component that was reportedly, "not meeting expectations".

So with much anticipation and undoubtedly, Nvidia heavily holding their breath nervously... The Nividia Shield will ship next week on Wednesday July 31st for the now-reduced price of $299. That's down $50 from the original pricing. I should definitely have a  review unit. Yet I'm unsure if it will arrive by the said launch date.

Below we have the final spec sheet laid out for you. But first lets looks at some company-made marketing video which show off what Shield should be able to do. First up is a video of Shield running Borderlands 2. This one is of particular interest to PC gamers. It shows Shield tapping your Steam games library via your 600 series-enabled PC.

Here is Will with Nvidia piloting the Parrot Quadrocopter with the Nvidia Shield.

Finally we have Shield running a the Tegra 4 enhanced ARMA Tactics for Android devices.