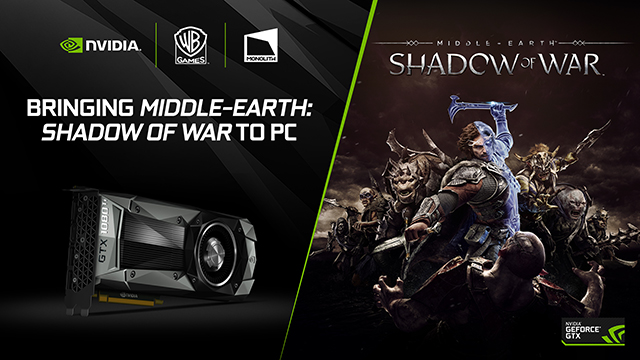 The collaboration was announced by Monolith’s vice president, Michael de Plater, during NVIDIA’s Gamescom 2017 conference. Apart from SLI, Ansel, and HDR support, NVIDIA and Monolith are working actively to add other PC and NVIDIA features to the PC version of the game as well.

“Our full arsenal of development resources — including visual effects libraries, developer tools, research papers, source code samples and more — is at Monolith’s disposal”, reads NVIDIA’s official blog post.” Our team, made up of more than 300 visual effects engineers, is lending its expertise in game development to the project and helping Monolith add the latest in graphics technologies to the game.”

Middle-Earth: Shadow of War is scheduled for a release on PC, Xbox One, and PS4 on October 10th. The sequel to Shadow of Mordor was officially announced back in February of this year. “Following the amazing reception to Middle-earth: Shadow of Mordor™, we massively expanded every dimension of the game, including the world, the story, the RPG systems, the core gameplay and of course the personal player stories of the Nemesis System,” said de Plater upon the game's announcement.