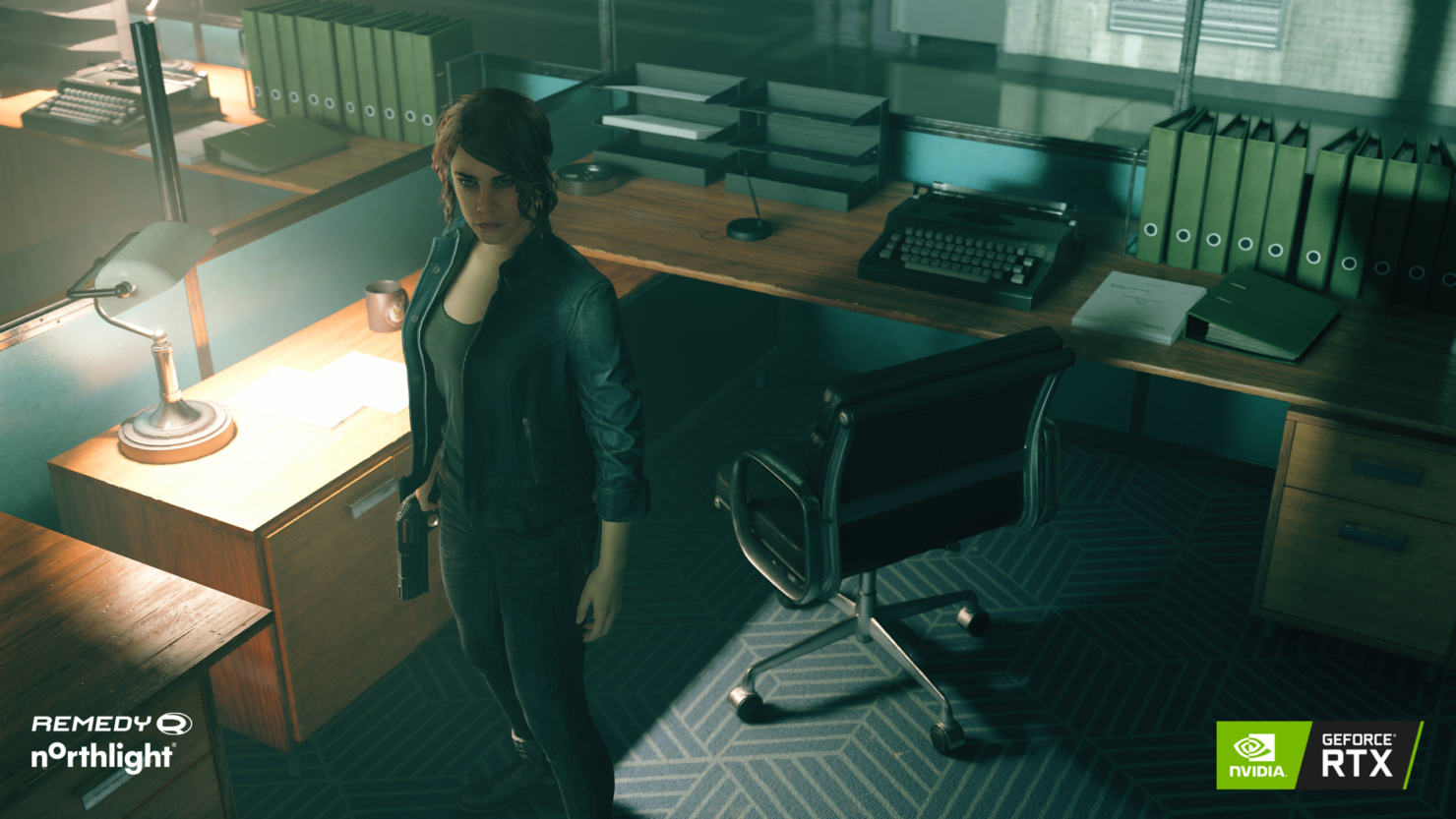 After yesterday's big reveal, NVIDIA clarified that the list of 21 games with NVIDIA RTX support included some titles which will only support Deep Learning Super-Sampling (DLSS) rather than actual real-time ray tracing.

Below you can find the two lists of announced games supporting each feature.

Broad Game Adoption of Real-Time Ray Tracing
Games that will feature real-time ray tracing include the following, with more to come:

Broad Game Adoption of DLSS
Games that will use DLSS include the following, with more to come:

Beyond this clarification, though, the GPU manufacturer also provided plenty of details on the ray tracing implementations chosen for Shadow of the Tomb Raider, Battlefield V, Metro Exodus, Control, Atomic Heart, Assetto Corsa Competizione, and MechWarrior 5: Mercenaries. You can find out how each developer has chosen to implement the NVIDIA RTX raytracing capabilities below.

Now, we can exclusively reveal the partnership also includes the addition of NVIDIA RTX Ray Traced Shadows in Shadow of the Tomb Raider, for gamers with GeForce RTX GPUs.

These shadows offer--for the very first time--hyper-realistic representations of the shadows we see in real-life, with support for large, complex interactions, self-shadowing, translucent shadowing, and a litany of other techniques, at a level of detail far beyond that has previously been seen.

The key takeaway from the video is that we can now render lifelike shadows and shadow interactions, at high levels of detail, throughout every scene, with translucency. This was previously impossible, but with the arrival of NVIDIA RTX and GeForce RTX graphics cards, it’s finally a reality.

Now, we’re lifting the curtain, unveiling spectacularly realistic and accurate ray-traced reflections, which enhance the fidelity of reflective surfaces in every level and locale in Battlefield V. 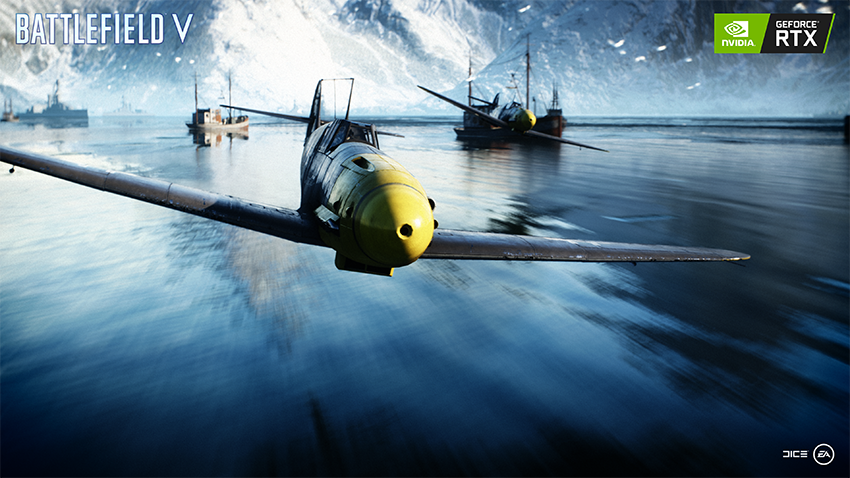 These new reflections, made possible by GeForce RTX graphics cards and the NVIDIA RTX Platform, overcome the limitations of traditional Screen Space Reflection techniques, enabling full-detail reflections that mirror the action happening in and around the player’s field of view. As you’ll see, they have a tremendous impact on fidelity and immersion, heightening realism and the intensity of events, as now even the surrounding chaos is visible, making players feel as though the battle is unfolding in a full 360 degrees around them. 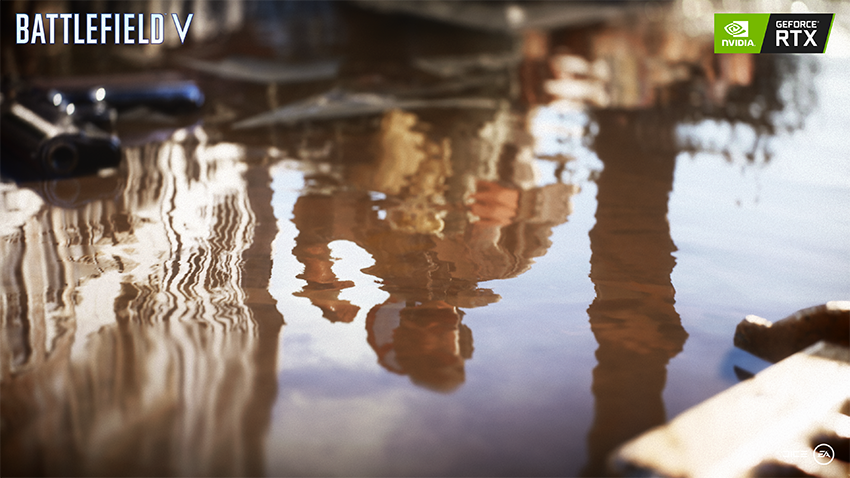 Specifically, Metro Exodus will feature Ray Traced Global Illumination, for vastly-improved natural lighting, and Ray Traced Ambient Occlusion, for the addition of pixel-perfect contact shadows where objects occlude light. The result is a richer, more immersive, more realistic world, with graphical fidelity that was previously beyond our reach.

By introducing real-time Ray Traced Global Illumination (RTGI), 4A can have natural lighting from the sun and moon realistically illuminate a scene, and have it genuinely affect the scene as the time of day changes. Before now, this was impossible – GPUs lacked the necessary hardware and performance to calculate real-time ray tracing, and no one had crafted technology and techniques to accelerate the process to such a degree that it could be used in graphically-complex games. 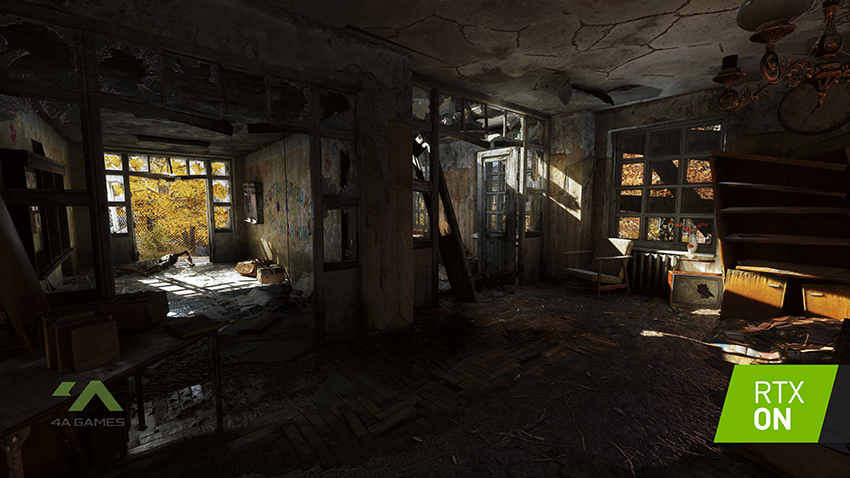 Similarly, we can now render real-time Ray Traced Ambient Occlusion (RTAO) for the first time, which enables us to calculate and display AO’s contact shadowing based on the geometry of the scene. Previously, even the best rasterized techniques were essentially rough approximations, with shadows surrounding an object rather than being based on their specific size and shape, and the materials they were made of. 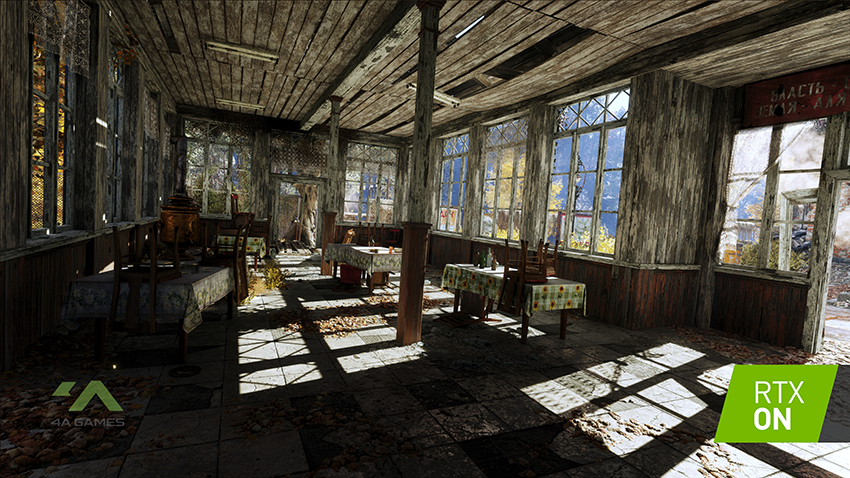 Now, Remedy has added ray-tracing to Control, starting with glossy Ray Traced Reflections, Ray Traced Diffuse Global Illumination and Contact Shadows for most influential light sources.
The Bureau’s glossy office environments are a perfect showcase for Global Illumination and Reflections, enabling the realistic reflection of floors, walls and furniture, elevating image quality and immersion. And as ray traced reflections are based on the exact geometric detail and dynamic lighting of a scene, expect to see Control’s supernatural enemies and action fully reflected at a level of quality that was previously unobtainable.

With Ray-Traced Diffuse Global Illumination, Remedy is able to enhance their existing Global Illumination system to deliver more accurate details, and also include lighting from dynamic light sources reflected from nearby surfaces in real time. As a result, even the smallest geometric details in a scene influence the indirect illumination with superior results. 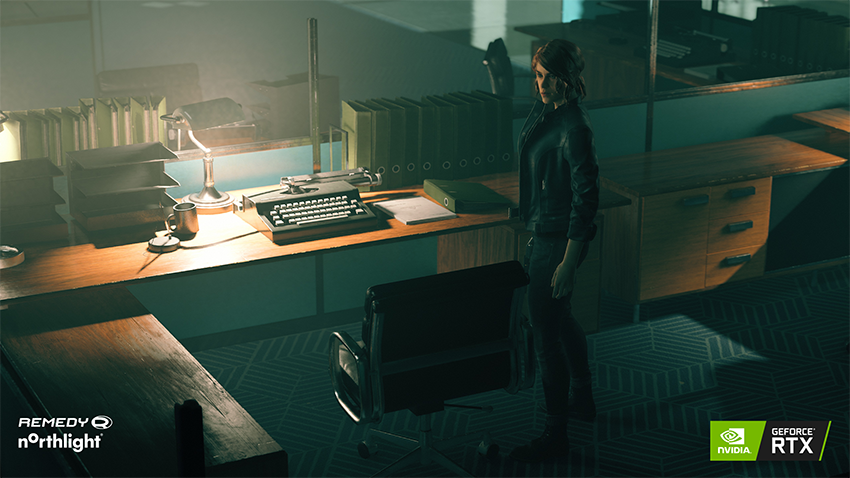 And finally, Remedy utilizes ray-traced contact shadowing to enhance non-RT shadows cast from lights with the highest intensity. By combining the two techniques, a scene’s most predominant shadows can be rendered at a higher level of detail than was previously possible. Additionally, ray-tracing enables rendering of accurate contact shadows from shadow casters outside of the camera’s field of view, enhancing immersion as the camera moves through the scene. 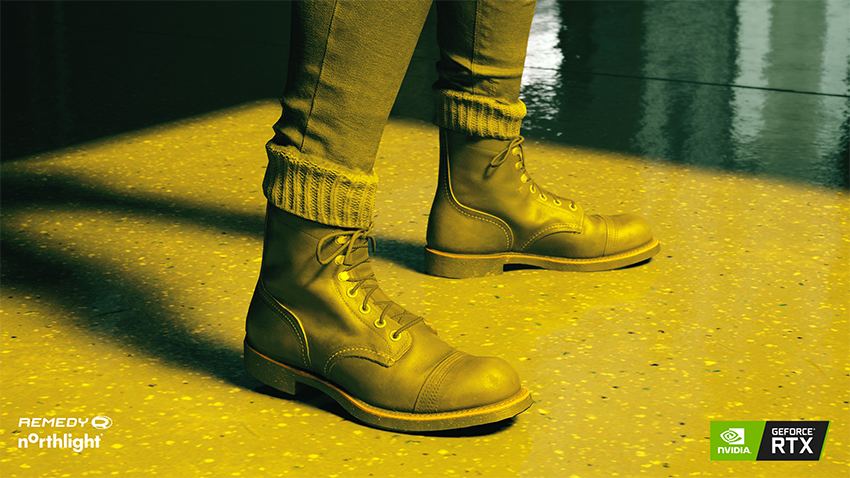 As you saw in the video, the addition of NVIDIA RTX Ray Traced Ambient Occlusion, Reflections and Shadows transforms the look of scenes, adding a massive amount of detail that accurately mirrors the properties of materials and the surrounding world. Most noticeably, Ray Traced Reflections add accurate, real-time reflections to Atomic Heart’s curved objects and surfaces, to its super shiny labs, to its water, and to numerous other game elements. Previously, reflecting much of this detail was impossible, and what could be reflected was seen at a far lower level of fidelity, without accurate representation of curved surfaces, or real-time updates of on and off-screen reflections. 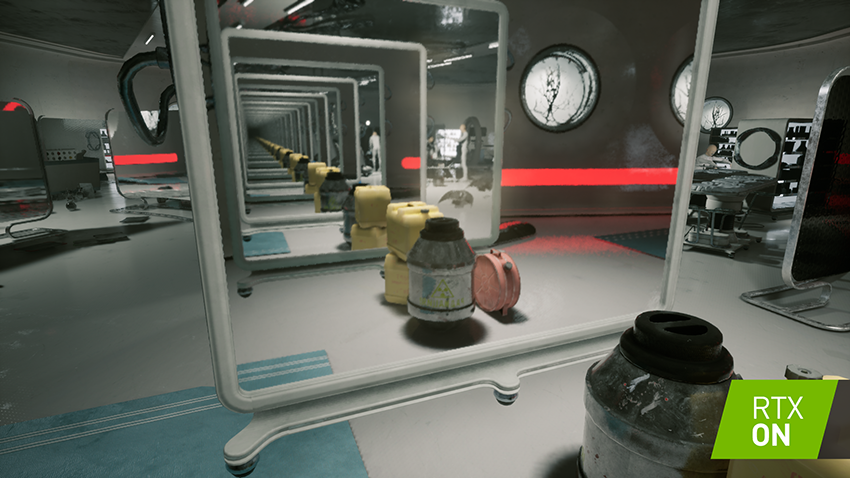 Similarly, the implementation of Ray Traced Shadows enables the casting of more accurate, more complex shadows that are rendered based on the properties of the scene. In addition, translucent shadowing and several other techniques that were extremely difficult and time consuming to create with prior technologies now become a possibility, giving developers even more ways to enhance the look and feel of their games. 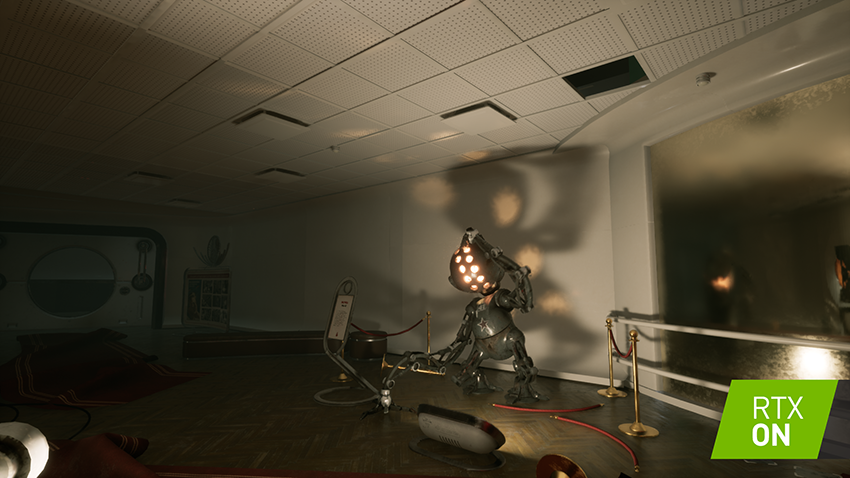 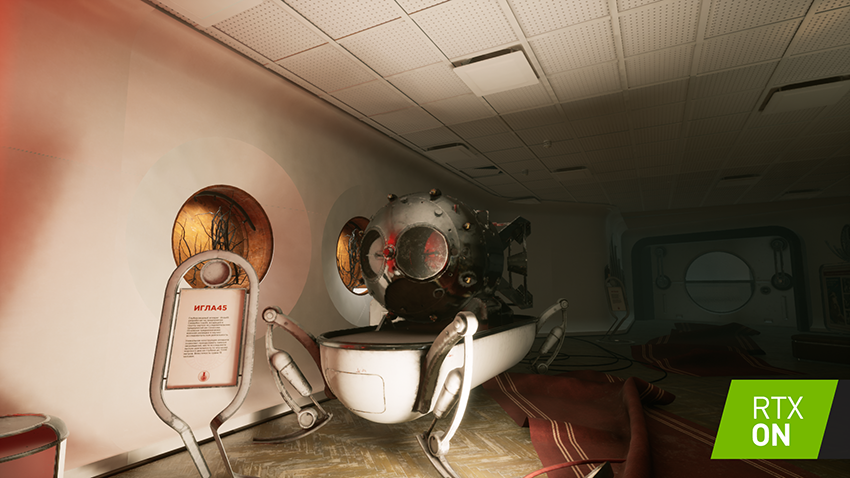 At a later date, it will upgrade its cutting-edge Unreal Engine 4 visuals with bleeding-edge NVIDIA RTX Ray Tracing, elevating its graphical fidelity. 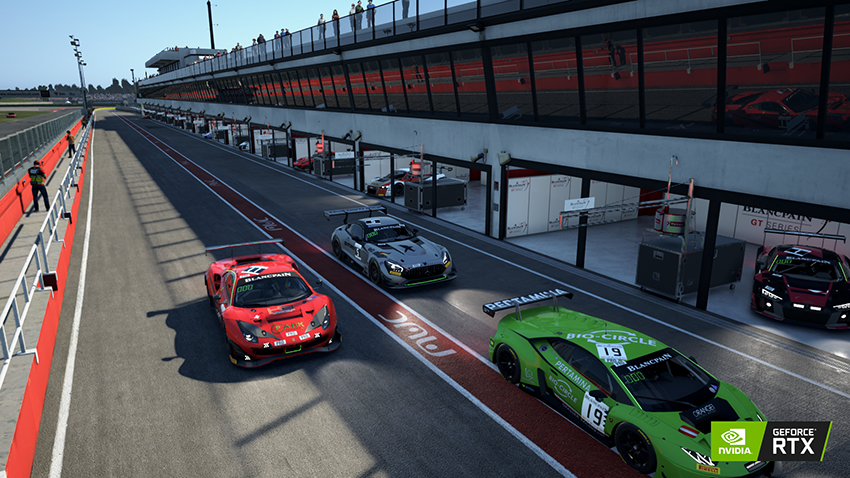 In the screenshots, Ray Traced Reflections, Shadows and Ambient Occlusion can be seen, though the reflections are by far the most immediately obvious, adding real-time, realistic mirroring of surrounding detail to cars, windows, and other reflective surfaces.

By utilizing the new Ray Tracing hardware within GeForce RTX graphics cards, and new software and tools designed specifically for ray-tracing, we can now render reflections as you experience them in the real world, dramatically increasing fidelity and immersion. Previously, the best tech we could use was Screen Space Reflections, and no amount of development time could overcome its limitations to match what is now possible.

Similarly, our Ray Traced Shadow technology enables us, for the very first time, to render hyper-realistic representations of the shadows we see day-in-day-out, with support for large, complex interactions, translucent shadowing, and a litany of other techniques. All at a level of detail far beyond that previously seen.

And with Ray Traced Ambient Occlusion, we can for the first time calculate and render Ambient Occlusion contact shadowing based on the geometry and objects of the scene, adding pixel perfect shadows throughout each scene.

Specifically, Piranha will be introducing NVIDIA RTX Ambient Occlusion shadowing, NVIDIA RTX Reflections, and NVIDIA RTX Shadows, which they’re demonstrating in an exclusive demo set in the MechWarrior bay of the dropship that’ll take players to and from planet surfaces. 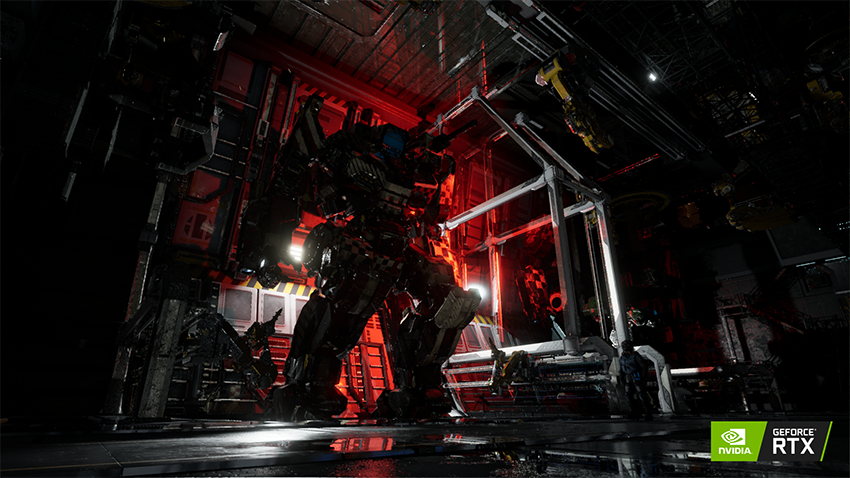 In the MechBay, ray-traced translucent reflections are seen on glass, on the walls and floors, and on the factory-fresh mechs, too. 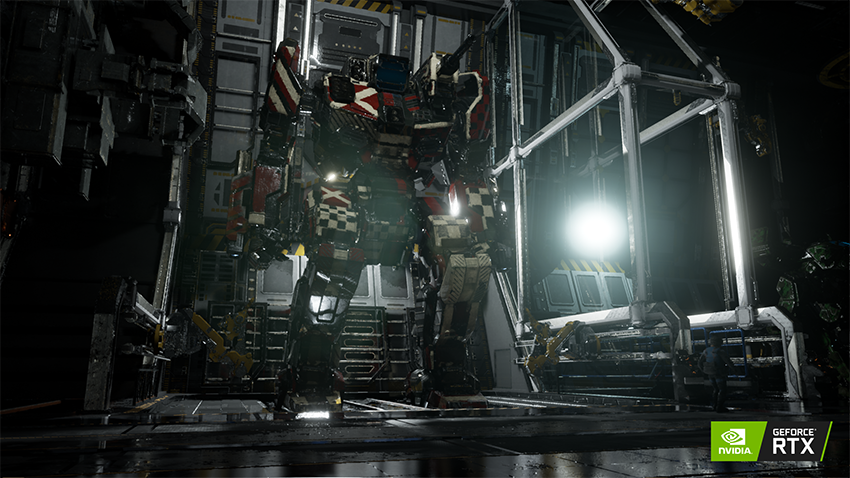 Ray-traced ambient occlusion and shadows, meanwhile, add to realism and immersion throughout the bay through the addition of realistic contact shadowing, and detailed, complex shadows cast from characters and mechs.