More than a year after their introduction, NVIDIA has silently decided to raise the prices of its entire GeForce RTX 30 Founders Edition series graphics card for the European market.

The information comes from Notebookbilinger/LDLC Discord group (via Videocardz & HardwareLuxx). According to the details, NVIDIA has decided it will raise the price of its entire GeForce RTX 30 Founders Edition lineup by up to 6.4%. This definitely is a shocking surprise since the crypto market has almost entirely crashed but despite that, NVIDIA is somehow deciding that they can increase the prices of their FE cards further up.

As you can tell from the table above, the prices for the entire lineup have gone up. The GeForce RTX 3090 has seen the biggest price increase of +6.4% and will now be officially listed over on GeForce EU webpage for 1649 Euros. The rest of the cards have also seen a price increase, ranging from 4.7% to 5.8%. It is also stated that the NBB (DE/AT/NL) and LDLC (FE/BE/LU/ES/IT) customers should also be expecting the price increases with rumors suggesting that the UK might be next to see this price hike. 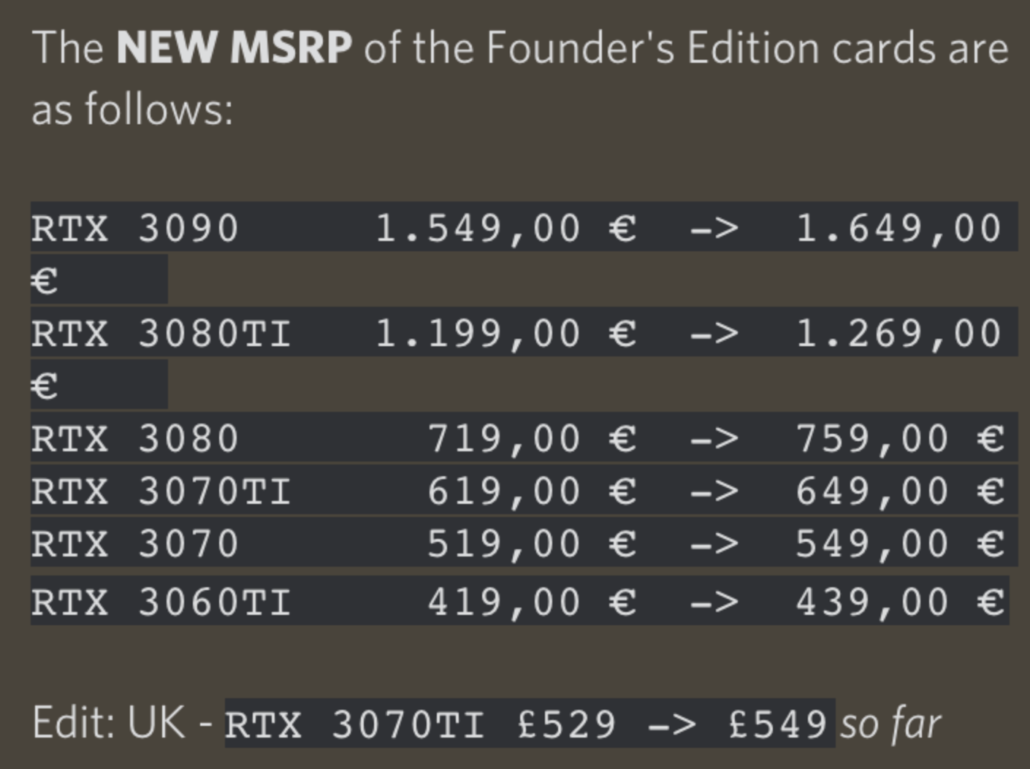 Currently, there's no reason known as to why NVIDIA has decided to increase the prices of their Founders Edition GPUs but a recent report said that chipmakers such as AMD, NVIDIA & Intel were expecting to raise the prices of their chips by up to 20% & while this is not as bad as a 20% increase, it's still an increase and something that customers weren't looking forward to. This would make getting an FE card at their 1st announced MSRPs almost impossible now.

Videocardz managed to grab some screens off NVIDIA's Germany webpage and can confirm that the price increase is indeed real:

We would definitely like to know the reason as to why NVIDIA decided to raise the prices of their graphics cards but we all really know why.