NVIDIA is overhauling its entire spectrum of GeForce laptops, the company announced in an e-briefing attended recently by Wccftech.

There'll be a record number of over a hundred GeForce laptops launching this month (starting April 15th) from 'top OEMs', with NVIDIA promising more performance at every price point. Prices will start at $699, though RTX support (which will include the 2070 SUPER and 2080 SUPER GPUs at the high-end level) will be available starting at $999. It's a refresh of the entire lineup, as you can see below, and those who are looking for a 300Hz display can rest easy knowing that there will be over 25 such designs to choose from, one of them being the new Razer Blade.

The key goal of NVIDIA for these Max-Q GeForce laptops has been to double efficiency across the board. This is achieved through a series of technologies, starting with Dynamic Boost.

This is exactly what it sounds like, a way to balance power in real-time, per frame, between the CPU and GPU. Traditionally, CPU and GPU have had shared thermals, which means they shared a heat pipe. However, there's a fundamental problem with that approach: it leaves performance on the table because every workload is different, it varies not only from game to game, not only from settings to settings but even from scene to scene of the same game with the same settings.

In essence, according to NVIDIA, shared thermals don't allow to adapt to the kind of bottleneck the system is dealing with, be it CPU or GPU, at any given time. Dynamic Boost is designed to fix that entirely by looking at every single frame through a bunch of telemetry data to identify the current bottleneck and spend each watt in the most efficient way possible. This results in a 'free' performance boost that can range between 6 and 10% in GPU bound workloads.

NVIDIA clarified that while at launch most Max-Q GeForce laptops with Dynamic Boost will feature Intel CPUs, AMD CPUs are absolutely supported. In fact, NVIDIA's rep claimed the company is 'excited' about AMD's upcoming Renoir CPUs and Dynamic Boost will certainly be featured on those laptops.

Additionally, the feature can be turned off by users through the Control Panel. However, it cannot be simply turned on older generation laptops through some sort of patch as Dynamic Boost requires hardware support, not to mention that NVIDIA is doing per system tuning on each laptop to ensure they can squeeze every single bit of performance out of it. 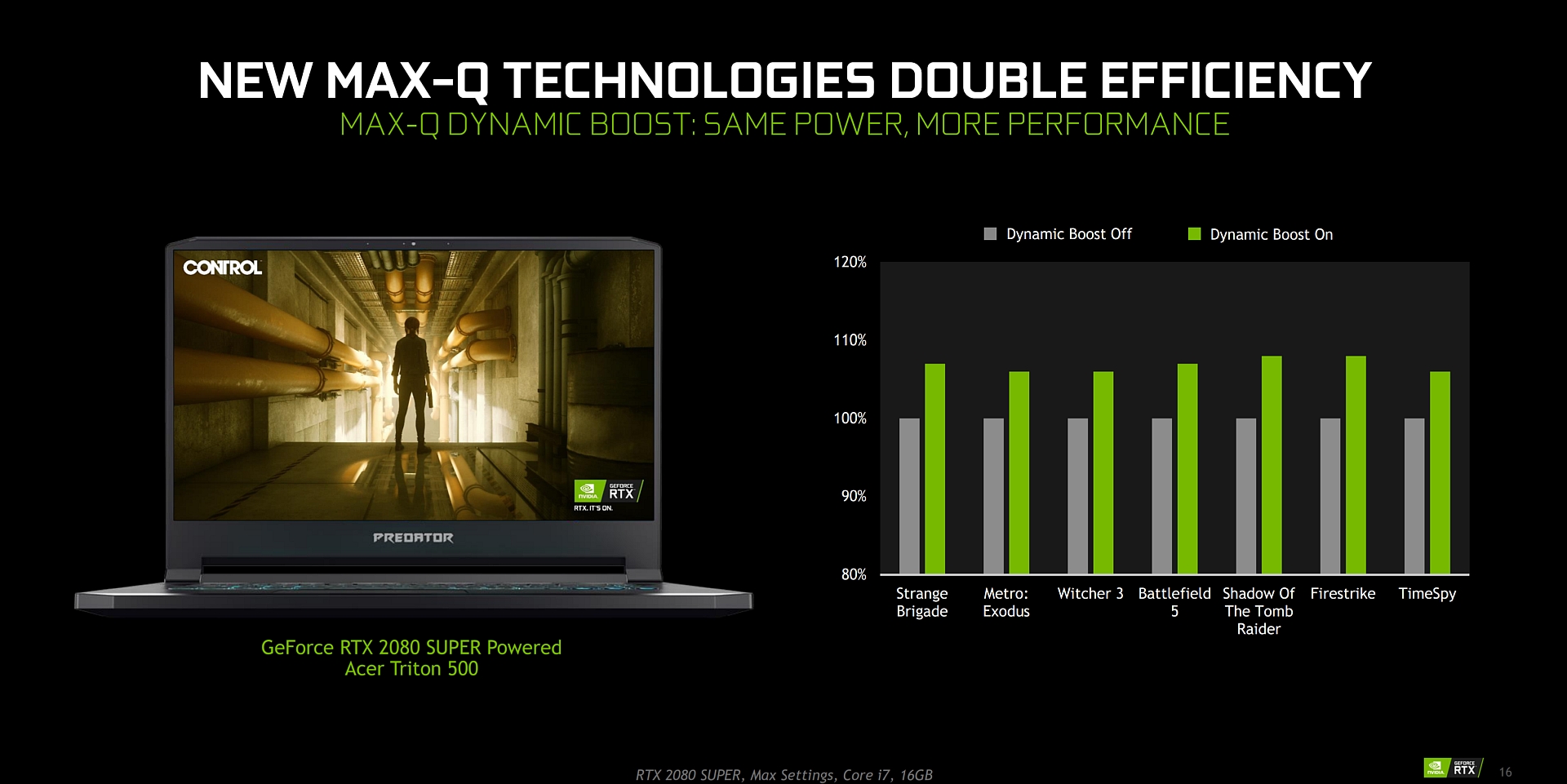 Then there's Advanced Optimus, which enables G-Sync support for the first time in an Optimus laptop. In traditional Optimus systems, the way it worked is the GPU basically drops frames onto the integrated graphics frame buffer. In other words, the GPU is not directly connected to the display, rather it's dropping frames onto the integrated graphics frame buffer. That way, when the GPU is not needed, the GPU can turn off to save battery life.

Advanced Optimus is a completely different display architecture where the CPU and GPU are connected to a dynamic display switch. The crucial difference is that when the GPU is the one being used, it is directly connected to the display and this allows G-Sync support as well as high resolutions and refresh rates (up to 4K and 120Hz). The Lenovo Legion 7 is the first laptop to support Advanced Optimus, but more GeForce laptops featuring this architecture are coming from Acer, MSI, and others.

Another key Max-Q feature listed in the presentation is actually DLSS (which recently got updated to version 2.0), perhaps further explaining the company's huge investment in the AI reconstruction technique that exploits the Tensor Cores of RTX GPUs.

According to NVIDIA, DLSS can also boost battery life by up to 20% when used in Performance Mode, as seen in the example below featuring Deliver Us The Moon. That's because it has been paired with a feature called Battery Boost to enhance battery duration when your laptop is unplugged. 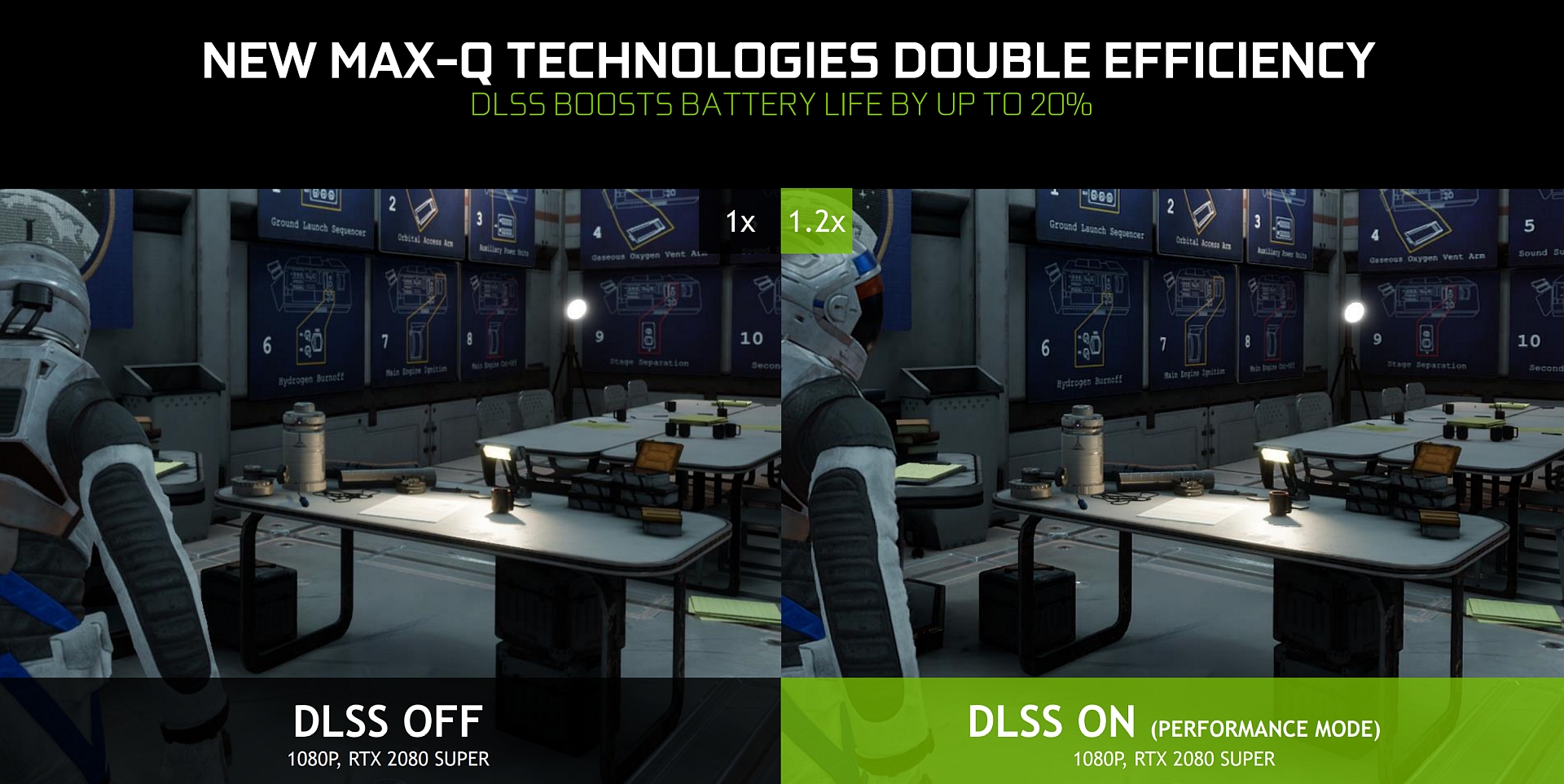 But there's more. NVIDIA also worked with memory manufacturers in order to craft a brand new, low voltage GDDR6 memory that enhances efficiency and saves a few extra watts off the memory side which are then directly fed to the GPU core, boosting frequencies and performance.

Last but not least, these new Max-Q GeForce laptops are equipped with a next-gen voltage regulator design. According to NVIDIA, about 15% of the typical 80 watts reserved for the GPU in a Max-Q laptop just gets lost due to the regulator, whereas these next-gen regulators are more efficient and therefore save precious power for the GPU, in a literal bid to avoid wasting watts which is at the core of doubling efficiency for these new Max-Q GeForce laptops.

Beyond gamers, content creators may be interested in the 10 new RTX Studio laptops announced by NVIDIA, powered by the new SUPER GPUs and Intel's 10th Gen CPUs, produced by the likes of Acer, Gigabyte, MSI, and Razer.

There is even a limited time offer for those customers purchasing the new RTX Studio laptops, as they'll get three months of Adobe Creative Cloud subscription bundled in, for an additional value of $238.47.