While we wait for Pascal, NVIDIA has silently launched their GeForce GT 710 graphics card which is a low-end solution aimed at low profile platforms such as HTPC and media boxes. The GeForce GT 710 isn't a card that is built for gamers but a dedicated, low cost solution built to deliver better performance over an integrated GPU solution. 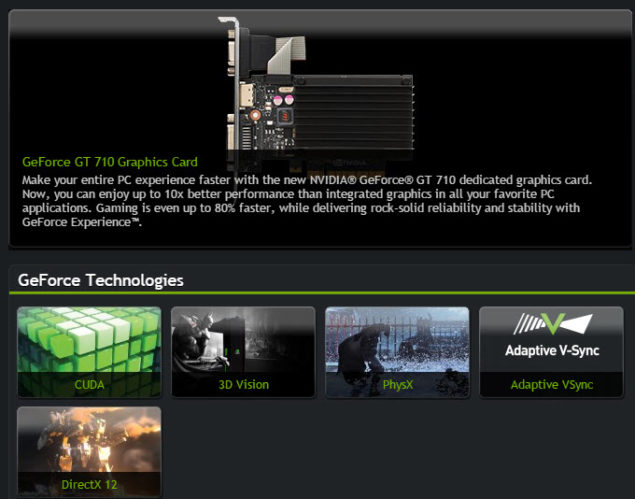 The NVIDIA GeForce GT 710 is aimed at a market that doesn't require high-performance products and would rather stick with low cost solutions. The GeForce GT 710 may not be much faster compared to the regular iGPU you found on your Intel processor or an AMD APU but it does provide the advantage of a dedicated graphics solution, offering better display capabilities and graphics rendering capabilities which otherwise aren't found on most integrated GPUs. The GeForce GT 710 comes with CUDA, 3D Vision, PhysX, Adaptive VSync and DirectX 12 support.

Coming to the specifications, NVIDIA's GeForce GT 710 is based on the older Kepler architecture. It uses the GK208 graphics core which is a revised version of the GK108 graphics core and has 192 CUDA cores in total which means only 1 SMX is found on the graphics chip (Kepler has 192 CC per SM compared to 128 CC per SM on Maxwell). The chip is clocked at 954 MHz though that may differ with AIB specific models. The card pack up to 2 GB of DDR3 memory that is clocked at 1.8 Gbps and runs along a 64-bit bus interface. The card pumps out a bandwidth of 14.4 GB/s. The GeForce GT 710 is a low end graphics card and maintains a 19W TDP. Display outputs include HDMI, Dual Link DVI-D and VGA ports. The card will be available in several form factors that include single slot, single slot (low-profile) and dual-slot models. 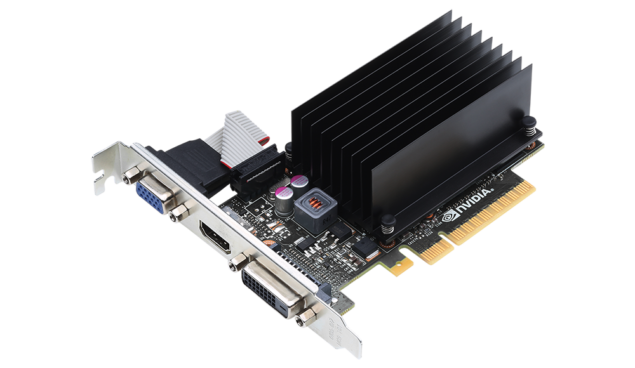 NVIDIA themselves mention that the GeForce GT 710 can deliver up to 10x better performance than a iGPU and is faster than 80% of all iGPUs. That still does mean that the latest solutions from Intel and AMD are more powerful than the low-end GPUs available but come at a higher cost compared to the GT 710. Comparing the Intel's Iris and AMD's Radeon iGPUs with GT 710, both iGPUs are found on processors that retail above the $150 US price range. NVIDIA's GeForce GT 710 on the other hand has a price of just $30 US for the 1 GB and $40 US for the 2 GB variants.

While Intel stated that their Iris and Iris Pro graphics can outperform 80% of the discrete GPUs in the market, NVIDIA has released a counter statement that their GeForce GT 710 can outperform 80% of integrated GPUs. The GeForce GT 710 is an interesting low-end solution, one which may not be mentioned in the enthusiast market at all but will become a good option for users who don't want to spend a lot on building a low cost home or office PC and want better graphics performance than what their integrated graphics processor may have to offer. The recent Celeron chips that retail for $42 US would go well with the GeForce GT 710 in building a low cost PC. The GeForce GT 710 is available in the market with several models from NVIDIA's partners.