Just a few weeks back we reported that the Geforce GTX 750 has been updated to the GM206 die. Well, something similar is now happening to the mobility lineup from Nvidia in which the GTX 965M will be updated to a more powerful core. The news comes via NoteBookCheck. Considering that the mobile platform is much more effected by TDP and power efficiency, this is a much more significant update than its desktop counterpart. 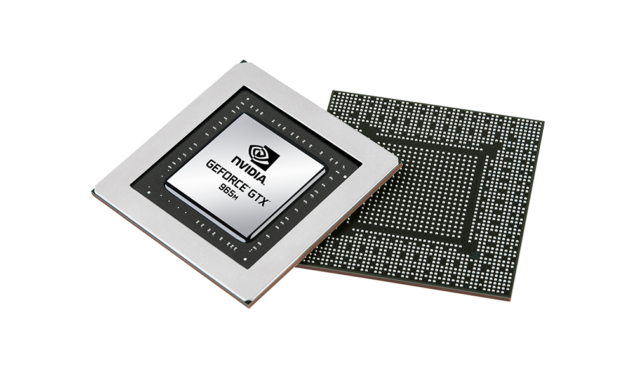 The current variant of the GTX 965M is codenamed "N16E-GS" whileas the new variant will be code named "N16E-GR". The overclocking headroom (for enthusiasts) should remain the same. The chip originally had a cut down GM204 core, and it is not known whether the new GPU will have a more efficient revision of the GM204 or a full blown GM206. According to preliminary testing, there is a performance increase of about 15% associated with the higher clocks (the base clock will be around 950 Mhz according to reports).

Here are the benchmarks courtesy of NotebookCheck which show the new GTX 965M being 15% faster than the original variant. And just about 15% slower than the GTX 970M (the older variant was 34% slower). It scores around 8400 points on the 3DMark 11 benchmark. The base clock was originally 924 Mhz and will be increased to 950 Mhz whileas the boost clock will be increased from 1151 Mhz to around ~1175 Mhz (approximately). The card will have a bus width of 128 bits and will support upto 80 GB/s of sustained bandwidth. It will rock 4GB of GDDR5 memory.

The nomenclature was originally thought to be the GTX 965M Ti but the source mentions that this is very unlikely. Which also means that this is going to get confusing fast once the GPU lands in Q1 2016. The price point will remain the same - which is good news for laptop gamers, since you are basically getting a performance boost at next to no cost. It is worth noting that the card will have a TDP of around 50W - which is pretty reasonable as far as GPUs for luggables go. It isn't a drop in the power-tdp spectrum of the GTX 980 (mobile) ofcourse, but then again, it isn't meant to be.