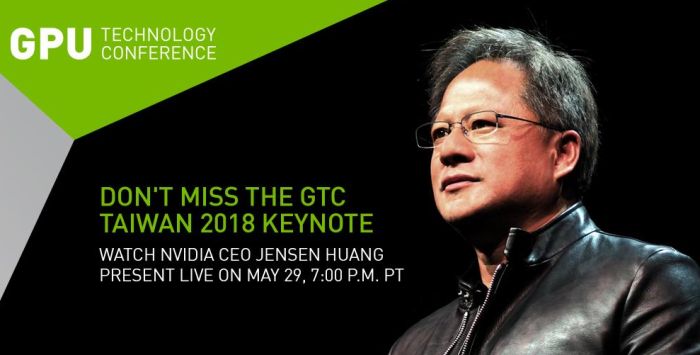 Another iteration of NVIDIA's GTC conference is on the way and CEO Jensen Huang is set to take the stage in Taiwan at 7:00 PM PDT, May 29. The annual Graphics Technology Conference usually has the opening keynote delivered by Jensen and features various other topics which usually include AI and deep learning. Of course, you can always bring out the betting books on whether we will see anything related to a new card.

GTC is the largest and most important event of the year for GPU developers. GTC and the global GTC event series offer valuable training and a showcase of the most vital work in the computing industry today - including artificial intelligence and deep learning, virtual reality, and self-driving cars.

That said, the probability of NVIDIA launching a GeForce card at this event is slim to none, considering this is not something they have done historically and leaks indicate that an Ampere reveal might be planned for sometime in July.

Then again, there has been buzz amout Ampere and Turing cards, which might contain a professional series lineup that could possibly launch at such an event.  GTC Taiwan 2018 will be immediately followed by Computex 2018, so if there is anything juicy to be seen at Computex, it should be shown here as well.

NVIDIA’s GPU Technology Conference (GTC) is the premier AI and deep learning event, providing you with training, insights, and direct access to experts from NVIDIA and other leading organizations.

NVIDIA also usually takes this time to give some advanced information to journos before Computex (although we can't really say since we aren't invited) and it is there that some inkling of their future plans will be revealed to the press immediately after NVIDIA GTC Taiwan 2018.

According to Beyond3D, the company has been preparing the Ampere architecture mainstream champion, the GA104, as the perfect replacement for high end Pascal. The second quarter of 2018 would mark exactly 2 years since the GP104 was unveiled back in 2016. To keep its two-year cycle alive, the company has to upgrade to the next iteration during 1H 2018.

We can now only wait and see what the leather jacket donning CEO of NVIDIA has in store for us at GTC Taiwan 2018.