GeForce RTX 30 series graphics cards can be bought on the Chinese Internet marketplace for the best prices in quite some time, but not for the greatest reasons. Chinese officials last week extensively shut down numerous cryptocurrency mining farms. Cryptocurrency farms are where several electronic rigs have several graphics processors connected to them for the sole purpose of processing code used in such cryptocurrencies as Bitcoin or Etherium, just to name a few.

Computers and laptops in large quantities are also used in the same fashion. Due to China's crackdown on cryptocurrency farms, many crypto mining GPU sellers have relocated to the Sichuan region to sell the used equipment as immediately as possible. Cryptocurrency farms are quickly selling used RTX 30 series GPUs for as low as ¥1,760, or around $270 — if not lower — as reported by cryptocurrency site The Block. One other crypto mining farm is attempting to sell gaming laptops that were utilizing the onboard RTX 3060 GPUs for around $1000. 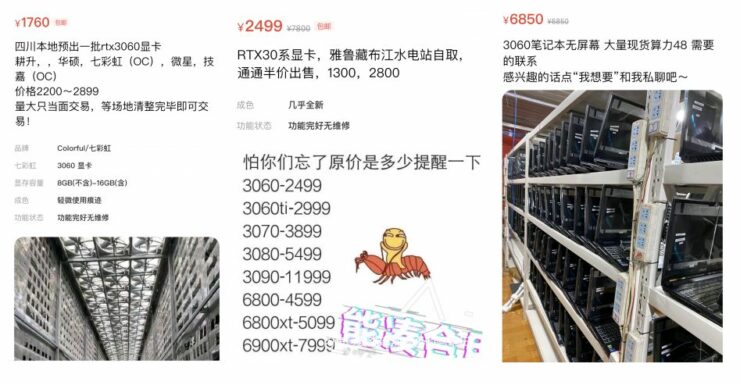 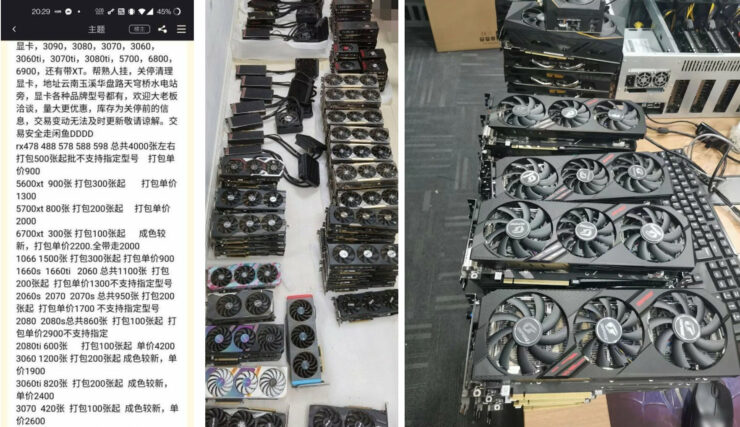 The biggest problem with any gamers or high-end computer users attempting to purchase these second hand GPUs or laptops are that the crypto mining rigs and computing units have stressed the GPUs to such a high degree of processing power that the GPU's life expectancy has decreased dramatically. Crypto mining rigs or devices must be on and continuously running at all times, processing large amounts of code, to be the most effective. Because RTX 3060 models are less expensive to acquire than newer next gen GPUs, that is why they were in high demand and why now sellers are attempting to sell them at incredibly low prices.

Any gamer or computer user thinking about cashing in on these RTX 30 series GPU flash sales should be aware of what they are attempting to purchase. If you happen to be someone who is purchasing any of theses graphics processors or computing systems secondhand, keep an eye out for negligent or missing warranties, caps or covers not removed from the display connectors on the graphics processing units, questionable packaging that appears tampered with or resealed, or not given the option to return the product if it is not working on arrival.