It looks like some NVIDIA engineer got a bit too hasty with testing because benchmarks of an "NVIDIA Graphics Device" that outperforms a TITAN V have just leaked out from the Ashes of the Singularity database (spotted by TUM APISAK). Before we begin, its worth noting that while there are indications that this leak is legitimate, always take third-party benchmarks with a grain of salt considering its usually easy enough to fake the Device ID.

One of the reasons why we think this is a legitimate leak from the AotS database is because the profile is named NVGTLTest009 and interestingly there is another user testing the same GPU - which appears to be the NVIDIA RTX 2080 - called the NVGTLTest007. This makes it seem like workstation names which remained connected to the internet and the benchmarks leaked out. Secondly, the device id is very subtle and designed for obscurity - NVIDIA Graphics Device as opposed to something loud like RTX 2080 for example.

Lastly, its the simple fact that while it is very easy to fake names, it is almost impossible to fake the score - which is one of the highest (if not the highest) we have seen in the Crazy 4k and 5k setting. The benchmark session shown here actually outperforms a TITAN V - which is an absolutely mammoth GPU and should by all logic remain unchallenged by anything other than a Turing. You can tell that this is a single GPU setup, because of the fact that the benchmark states so. All in all, I am fairly certain that these benchmarks are either of the Quadro family or the GeForce RTX 2080. 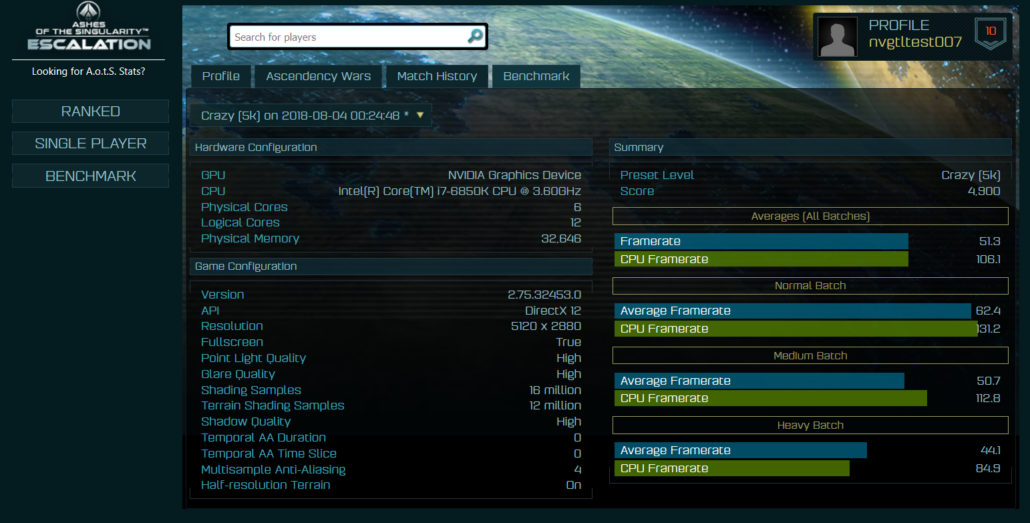 I took the liberty to screenshot them in case NVIDIA pulls em.

Before we dive in, please bear in mind that these are almost certainly not using the final driver variants and are quite probably test boards. In other words, the performance metric representative here is just to get an idea and should only be taken at face value. Considering this is a gaming benchmark, it is much more likely that what we are looking at is, in fact, the NVIDIA RTX 2080 flagship GPU that the company will dazzle us in just over a week's time. The card scores almost 69 fps in the Crazy 4k preset on average, which is - well - crazy performance levels. We have also seen some older benchmarks under the same name go over 78 fps.

In other iterations of the sessions, however, the RTX 2080 falls just behind the TITAN V baseline so it looks like we are looking at an average performance somewhere around that mark. This makes a lot of sense considering the TITAN V outputs FP32 performance of 15 TFLOPs while the Turing GPU shown on stage could hit 16 TFLOPs. That said, the die shown on stage was probably the GT102 die and the RTX 2080 graphics card is probably going to feature the GT104 variant - which should have a reduced core count. However, what it loses in terms of core count, it should make up in terms of clocks, all things being held constant.

This level of performance should allow comfortable 4K 60 performance and even put 4K 120 within the reach of gamers if they are willing to turn down the AA just a teensy tiny bit. It is also perfect performance for VR which is 2K 90. The most important attraction of the architecture - ray tracing - is something this benchmark cannot capture however and it is that feature which I am personally most excited about. All in all, it looks like gamers can expect a very solid increase in performance over the last generation (although the premium they will have to pay for this is uncertain at this point) in just a week's time.