>Nvidia's Geforce GTX Titan X is the flagship GPU available to gamers around the world. It costs an arm and a leg, but the performance delivered is the highest end possible (for the time being). The more savvy of our readers might recall that Nvidia does not allow AIBs to modify its TITAN branded series of cards. So it comes as a very pleasant surprise when BitsandChips.it report that green is actually considering one with a closed loop cooler - raising the over-clocking potential and performance of the card significantly. 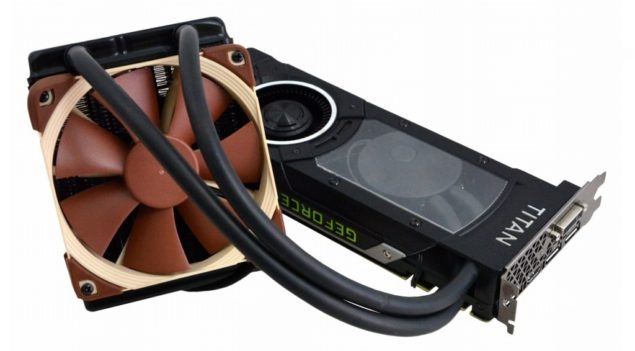 A picture of a water cooled Titan X that was spotted by Hermitage Akihabara. @Unknown

A Titan X 'Ultra' AIB Specification might be in the works, GM200 but with more OC

Some vendors like Overclocks UK offer Titan X's with water blocks equipped but those are basically customized SKUs that have been repackaged. Similarly, HA reports that a Sycom Titan X with a closed loop AIO cooler has surfaced recently. The cooler is the G Master Hydro system and hybrid cooling is employed on the card (VRMs by air, core by liquid). So far, the main AIBs are limited by Nvidia's rule of conduct - which means no messing with the official AIB specification of the Titan X.

However, in a move that appears to be inspired from AMD, Nvidia seems to be discussing a possible Titan X 'Ultra' Specification (nomenclature not confirmed). Ofcrouse, the GM200 die in the card is already "full-fat", which is slang for a complete, unaltered die. That means a fuller/better core (architectural revisions/better binning are not possible this early) is out of the question. Which affirms the possibility that we are going to be seeing an official water cooled Titan from Nvidia - with all the performance jumps that comes with the increased OC. Maxwell already OCs like a beast and this will only sweeten that particular pot further. According to Bits & Chips  Nvidia will be able to use the hybrid cooling system to increase frequencies of the GeForce GTX Titan X by around 250MHz over the official stock.

That's a massive 1375 Boost clock people, up from 1075 Mhz - a jump that is pretty damn significant. Since the release of the AMD flagship is around the corner as well, this might be Nvidia's ace in the hole to counter the red flagship performing better than the GM200. In the eventuality that the R9 390X (or whatever it will be called) beats the stock Titan X, Nvidia simply rolls out the water cooled Titan X - a tit for tat move, with red tactics perfected to an art form. Ofcourse, this is still a rumor and could possibly account to nothing except waster words - so keep that in mind as well.