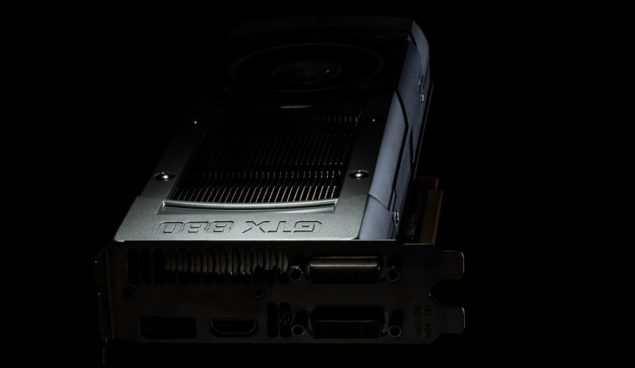 Last time, I did the analysis of the leaked GeForce GTX 880 PCB which was in engineering state and found out some intriguing details such as the 256-Bit memory bus, the GM204 chip being larger than GK104 while being based on the current 28nm process node. We didn't get to see any specifications of the card itself aside from a few details we were able to gather from the pictures. Today, we have a different sort of leak in the form of a screenshot which shows the GPU-z program running parallel to a 3DMark 11 score of an unknown graphics card.

The GeForce GTX 870 has the Device Id "NVIDIA D17U-20" and the GPU Id for the graphics core is 13C2. We have our own speculation regarding that but before we get into that, let's denote the entire specifications listed on the GPU-z panel. The GM204 SKU featured on the GeForce GTx 870 fuses 1664 CUDA Cores on the die along with 32 ROPs and 138 TMUs. From the first generation Maxwell core architecture, we learned that a Maxwell SMM (Streaming Multiprocessor Maxwell) unit has 128 cores compared to 192 on the current generation Kepler SMX units. Along with that, we have a 4 GB GDDR5 memory running across a 256-Bit memory interface clocked at 1753 MHz (7.00 GHz Effective) which pumps out 224.4 GB/s bandwidth. The core clock is maintained at 1051 MHz and 1178 MHz boost clock something which I was expecting if the cards were to be able to take on the GK110 core based graphics cards. Lastly, we have the fill rate numbers which amount to 33.6 GPixels/s Pixel and 145.0 GTexels/s Texture fill rates. The TMU count is a bit off since the maxwell core architecture holds 8 TMUs per SMX so we were supposed to see 104 TMUs in total instead of 138 so it could be a GPU-Z fault which could mean that these specifications might not be the actual deal.

Now as you may remember, the first generation Maxwell core architecture which is featured on the GM107 GPU has 2 times the performance per watt and the CUDA Cores, even though lower amount to more performance that is rated at 135% of the past generation. The key word here is first generation, since NVIDIA just previewed what their Maxwell architecture is capable of and having ample time for optimizing and enhancing the architecture, I expect to see better numbers being rated at 145-150% and we can see more power efficiency on the new cards. The GeForce GTX 750 Ti which is NVIDIA's entry level Maxwell offering is rated at 64W and comes with splendid performance for its wattage. Considering the updated design, I think there's no doubt that NVIDIA GeForce GTX 870 will be able to trump the GeForce GTX 780 in performance (although not by a big margin).

The core count and configuration for the GeForce GTX 880 looks around right since looking at the trend in the table provided below, you can note that the skimmed down *70 graphics card has generally one or two SM units disabled. The GK110 is the only chip in the line which has more chips disabled but that is due to the extended lineup due to which we had several cards in this line aka GeForce GTX 780, GeForce GTX Titan, GeForce GTX 780 Ti, GeForce GTX Titan Black (all of which are configured around the same core). In case there will be a higher SM units SKU, then NVIDIA will most definitely launch it as a Ti part as was rumored by a few sources a while back. If there are more disabled SMMs, then NVIDIA will launch them as a different card rather than releasing a 4 SMM disabled part

The 4 GB GDDR5 route seems to be the reference route for NVIDIA this time around moving onwards from a 2 GB GDDR5 VRAM configuration on several Kepler cards. The chips will still be configured around a 256-Bit bus but this just seems to be the route for graphics makers these days considering AMD is going this route with their next performance chip, codenamed Tonga (Radeon R9 285) which is considered faster than the Tahiti but has a 256-Bit memory bus compared to 384-Bit on Tahiti based Radeon R9 280 series.

NVIDIA GeForce GTX 870 and GTX 880 Specifications (What We Know So Far):