The NVIDIA GeForce GTX 1070 is the most competitive GeForce 10 series graphics card.

NVIDIA Pascal GTX 1070 is better than the GTX 970 in all possible ways!

NVIDIA GeForce GTX 1070 has better gaming and VR performance than the GeForce GTX 970. A must have for gamers!

The performance results of the GeForce GTX 1070 come straight from Videocardz and as seen below, the card beats the GeForce GTX Titan X and GeForce GTX 980 Ti by 5%. While this is not a big difference, drivers for the card is still in t he process of development so we expect to slightly better performance in the final reviews. One other thing that should also be pointed is that the GTX 980 Ti compared is a reference solution so overclocked variants will have no problem closing the gap and even being faster than the GTX 1070 which is why Titan X or 980 Ti owners should wait either get the GTX 1080 (Custom Models) or wait for the big Pascal GPU.

For GTX 980 and GTX 970 owners, the GeForce GTX 1070 is an easy 30-45% increase in performance which is a good figure, especially when this card will be available at a starting price of $379 US. The card is almost half the cost of 980 Ti with better performance at its original MSRP. Compared to the GTX 1080 Founders Edition, it is even better value however the GTX 1080 is around 24% better at a higher cost. 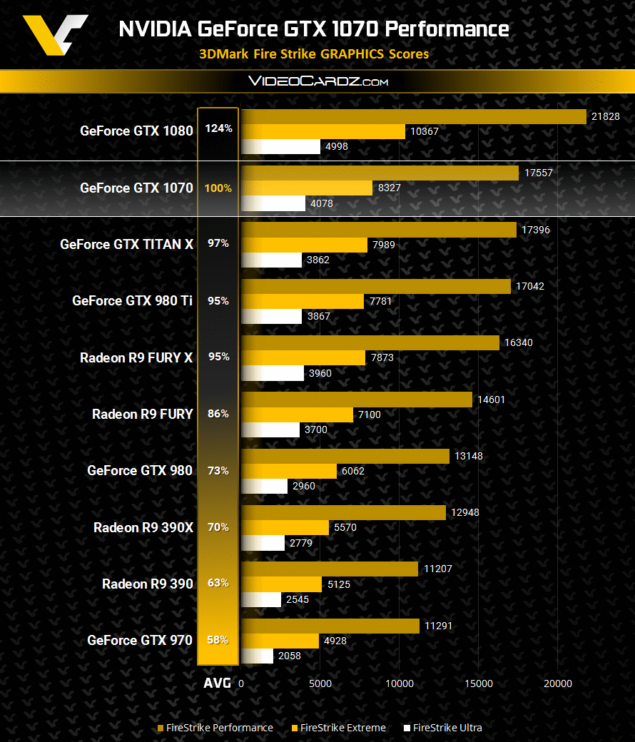