At this year's CES, NVIDIA along with their OEM partners are bringing new G-SYNC technologies and displays for consumers. Specifically aiming at the Esports segment, NVIDIA has revealed a brand new display technology surrounding G-SYNC which delivers new features and offers higher refresh rates than any existing monitor to help you win the game!

While there are many G-SYNC related announcements coming at CES 2020, the first one NVIDIA is taking wraps off is their G-SYNC Esports lineup. Aimed at competitive gamers, the NVIDIA G-SYNC displays will offer the fastest refresh rates on any screen designed to date. The first product in this lineup is ASUS's ROG Swift 360 Hz and is made in full accordance with the new Esports based specifications.

In the world of competitive gaming, where mere milliseconds can make the difference between victory and defeat, NVIDIA today unveiled new G-SYNC displays with a 360Hz refresh rate, providing esports enthusiasts and competitive gamers with the fastest gaming displays ever made. At 360Hz, game frames are displayed once every 2.8ms—up to 6X faster than traditional gaming displays and TVs.

The new G-SYNC Esports displays are aimed specifically at fast-paced, competitive gaming. Last month, we got to see the first 280 Hz refresh rate monitor in the form of the ASUS TUF Gaming VG279QM IPS, which sported G-SYNC along with a resolution of 1080p (HD). The monitor had a range of other features such as ASUS's Extreme Low Motion Blur (ELMB), VRR (Variable Refresh Rate) and also supported VESA's Adaptive-Sync technology. 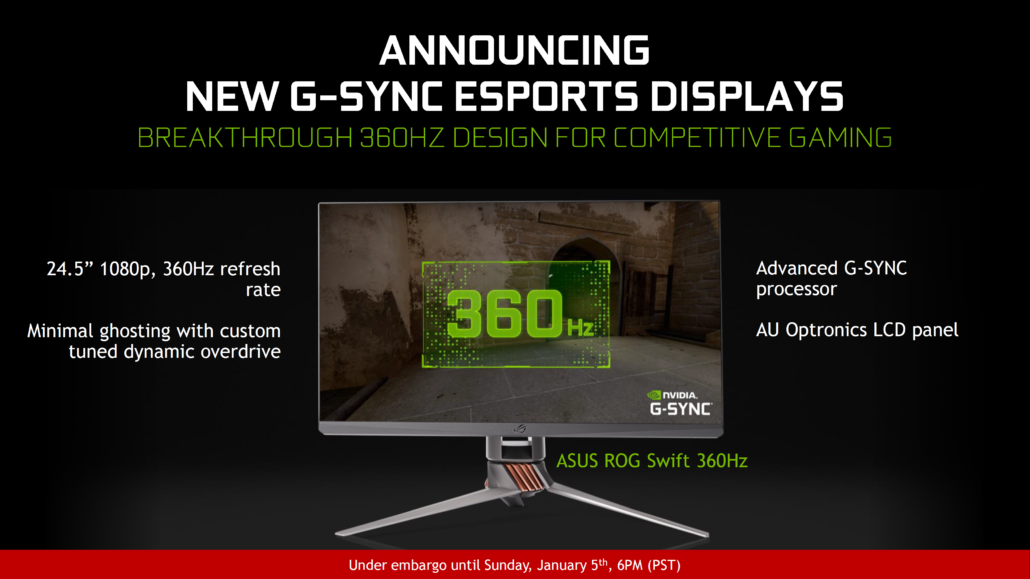 Well, NVIDIA is planning to offer an even higher refresh rate to competitive gamers with the G-SYNC Esports displays. The monitors will be carrying a breakthrough 360 Hz refresh rate in the same 1080p (HD) package. The first monitor that is being listed to carry the new G-SYNC Esports specifications is the ASUS ROG Swift 360 Hz which features a bezel-less design on a 24.5" panel, comes with an advanced G-SYNC processor with minimal ghosting with custom-tuned dynamic overdrive and is based on an AU Optronics LCD panel. The main features of NVIDIA's G-SYNC Esports display include:

According to NVIDIA's own research, there are certain advantages associated with higher-refresh rate monitors such as the G-SYNC Esports panels. Some of the advantages listed are:

It is also stated that the general flick short improvement between a 60 Hz monitor to a 120Hz panel is a staggering 28% with 240 Hz offering a further 5% improvement and 360Hz offering another 5% uptick.

This certainly opens a wave of new higher refresh rate monitors to be embedded in gaming cafes which specialize towards Esports gamers, a widely popular gaming category across the globe and especially in Asian and South Asian regions where Esports titles are now highly-competitive with huge pools of winnings being announced in several tournaments. Expect to see more OEMs offer their own G-SYNC Esports displays in the coming months.