NVIDIA has announced an update to the NeMo Megatron framework which delivers an AI training speed-up of 30% for large language models.

Press Release: As the size and complexity of large language models (LLMs) continue to grow, NVIDIA is today announcing updates to the NeMo Megatron framework that provide training speed-ups of up to 30%.

These updates–which include two trailblazing techniques and a hyperparameter tool to optimize and scale training of LLMs on any number of GPUs–offer new capabilities to train and deploy models using the NVIDIA AI platform.

LLMs are one of today’s most important advanced technologies, involving up to trillions of parameters that learn from text. Developing them, however, is an expensive, time-consuming process that demands deep technical expertise, distributed infrastructure, and a full-stack approach.

To advance LLMs, the AI community is continuing to innovate on tools such as Microsoft DeepSpeed, Colossal-AI, and Hugging Face BigScience–all powered by the NVIDIA AI platform, involving Megatron-LM, Apex, and other GPU-accelerated libraries.

These new optimizations to the NVIDIA AI platform help solve many of the existing pain points across the entire stack. NVIDIA looks forward to working with the AI community to continue making the power of LLMs accessible to everyone.

The latest updates to NeMo Megatron offer 30% speed-ups for training GPT-3 models ranging in size from 22 billion to 1 trillion parameters. Training can now be done on 175 billion-parameter models using 1,024 NVIDIA A100 GPUs in just 24 days -- reducing time to results by 10 days, or some 250,000 hours of GPU computing, prior to these new releases.

It makes LLM training and inference easy and reproducible on a wide range of GPU cluster configurations. Currently, these capabilities are available to early access customers to run on NVIDIA DGX SuperPODs, and NVIDIA DGX Foundry as well as in Microsoft Azure cloud. Support for other cloud platforms will be available soon.

You can try the features on NVIDIA LaunchPad, a free program that provides short-term access to a catalog of hands-on labs on NVIDIA-accelerated infrastructure.

Two new techniques included in the updates that optimize and scale the training of LLMs are sequence parallelism (SP) and selective activation recomputation (SAR).

Sequence parallelism expands tensor-level model parallelism by noticing that the regions of a transformer layer that haven’t previously been parallelized are independent along the sequence dimension.

Splitting these layers along the sequence dimension enables the distribution of the compute and, most importantly, the activation memory for these regions across the tensor parallel devices. Since the activations are distributed, more activations can be saved for the backward pass instead of recomputing them.

Accessing the power of LLMs also requires a highly optimized inference strategy. Users can easily use the trained models for inference and optimize for different use cases using p-tuning and prompt tuning capabilities. 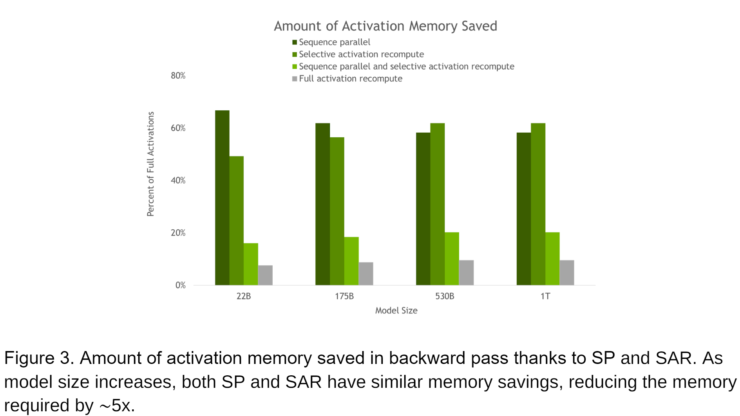 These capabilities are parameter-efficient alternatives to fine-tuning and allow LLMs to adapt to new use cases without the heavy-handed approach of fine-tuning the full pre-trained models. In this technique, the parameters of the original model are not altered. As such, catastrophic ‘forgetting’ issues associated with fine-tuning models are avoided. For more information, see Adapting P-Tuning to Solve Non-English Downstream Tasks. 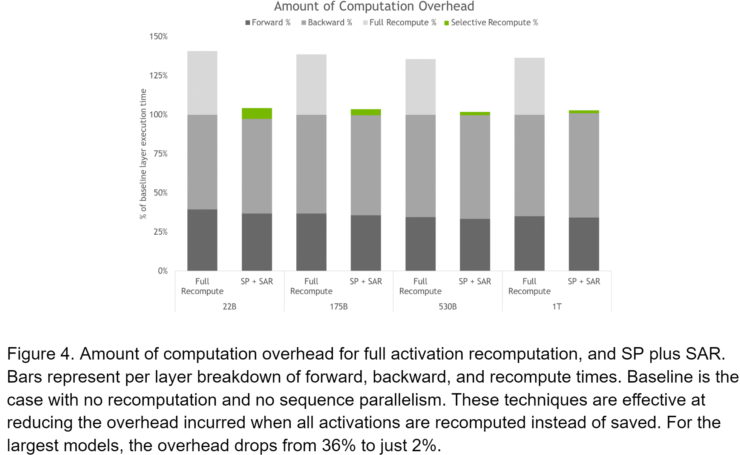 Finding model configurations for LLMs across distributed infrastructure is a time-consuming process. NeMo Megatron introduces a hyperparameter tool to automatically find optimal training and inference configurations, with no code changes required. This enables LLMs to be trained to convergence for inference from day one, eliminating time wasted searching for efficient model configurations.

Using the hyperparameter tool and NVIDIA testing on containers on NGC, we arrived at the optimal training configuration for a 175B GPT-3 model in under 24 hours (see Figure 5). When compared with a common configuration that uses full activation recomputation, we achieve a 20%-30% throughput speed-up. Using the latest techniques, we achieve an additional 10%-20% speed-up in throughput for models with more than 20B parameters.

The hyperparameter tool also allows finding model configurations that achieve the highest throughput or lowest latency during inference. Latency and throughput constraints can be provided to serve the model, and the tool will recommend suitable configurations.