Ubisoft has just released their latest AAA blockbuster title, Tom Clancy's The Division, which is one of the most anticipated game launching on PCs and consoles this year. The Division sets to take graphics fidelity into the very next level by adopting new graphical features in an open world universe with RPG elements. The game is a crucial launch for the PC as legions of gamers have been waiting to play the game after its successful BETA run just a few weeks back. 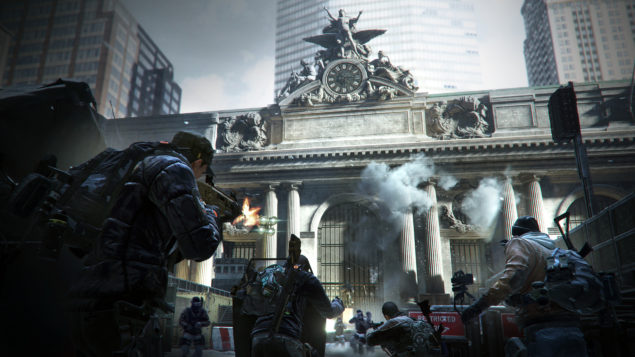 Before starting on the discussion on the game's performance, it should be stated that the Tom Clancy’s The Division is an online open world RPG set in the city of New York where an epidemic has brought upon a crisis like situation and being part of the Strategic Homeland Division (SHD), you must combat the threats of both rival factions and the epidemic in the city. The game revolves around you and your group which are based in the online yet most authentic and immersive New York City built to date. The game features a third person game style and players earn combat skills and money by fighting against enemies and foes. The game uses a fully dynamic time and weather system which leverages from using the latest graphical effects that are used on modern graphics cards on the PC. The system requirements for the game were released by Ubisoft back in January and are listed below: 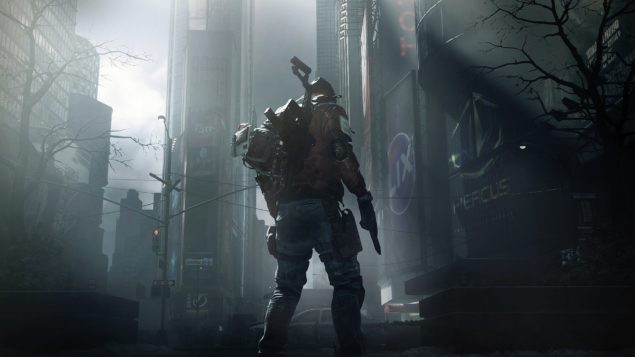 As you can note, there are several graphics settings to fine tune your visual experience in the game but the title also infuses a range of NVIDIA GameWorks features such as NVIDIA HBAO+ ambient occlusion shadowing, NVIDIA Percentage Closer Soft Shadows (PCSS), NVIDIA Hybrid Frustum Traced Shadows (HFTS). HBAO+ and PCSS are features that run well with NVIDIA's Kepler and Maxwell based cards but the latest HFTS (Hybrid Frustum Traced Shadows) feature is a totally new technology being introduced today which is in general an advanced shadow technique that utilizes the geometry engines of NVIDIA's Maxwell GPUs to create realistic and accurate hard shadows.

Users who don't own a Maxwell based graphics cards can still use their PCSS Shadows which offers a better visual representation than the normal highest quality available in the game. You can see the difference between PCSS and HFTS shadows in the two images below, do note that HFTS costs FPS and is a demanding graphical effect that makes a huge impact on shadows but taxes the GPUs dearly. So users how want better frames than graphics will have to go with PCSS or High quality shadows.

NVIDIA has been a close partner with Ubisoft in the creation of The Division and was stated by Massive's technical director, Andres Holmquist, last week about their cooperation with the graphics company.

The game comes with an in-game benchmark which gives a beautiful and short tour of the New York City feature in the Division. You can take a look at our exclusive video of the whole benchmark scene in the following video:

NVIDIA's own crunched up numbers show that the game is fairly taxing when all the graphics settings are pumped up. Their recommended listings show the GeForce GTX 970 as the best card to play the game on 1080P resolution while the GeForce GTX 980 Ti is recommended for 1440P. NVIDIA uses a pre configured testing scenario where the graphics settings are set to deliver the best possible visuals at a stable 60 FPS. 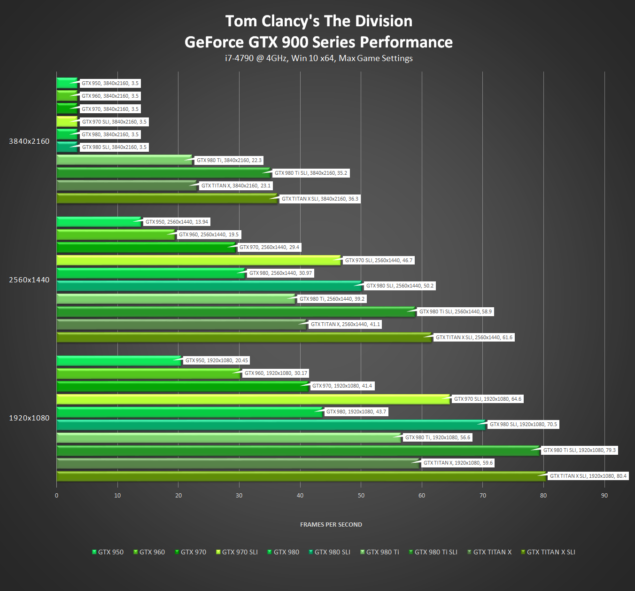 While recommended is seen as the best visual and stable 60 FPS scenario, NVIDIA's other benchmarks show the settings cranked up to the max where almost all GPUs fall on their knees. Even the beefy Titan X and GeForce GTX 980 Ti SLI setups can only deliver up to 35-40 FPS at 4K resolution. At 1440P, the same graphics card in SLI setup can manage 60 FPS. Maximum settings are something which PC gamers always want to play games on but they are taxing on GPUs.

Settings such as Particle Detail, NVIDIA HFTS/PCSS, Spot Shadow Resolution, Volumetric Fog, HBAO+ and Depth of Field look great when enabled or tuned to max but they require lots of horsepower. These settings lead to higher FPS drop when enabled compared to other settings. So it's better to enable or configure them to their highest possible limit if you own a fast rig with SLI or CrossFire cards. Users using NVIDIA graphics cards can download the latest GeForce 364.51 WHQL drivers to the latest BETA release which allegedly fixes the multi-screen issues encountered on the WHQL release.

AMD and NVIDIA Real World Benchmarks For The Division on PC:

Looking over at prominent PC benchmarking sites such as PCGameshardware, we see that the Maxwell based cards are once again leading the performance charts in the enthusiast / high-end space. The GeForce GTX Titan X and GeForce GTX 980 Ti are ahead of their competing Fiji based Radeon products while GeForce GTX 980 with 4 GB GDDR5 VRAM still stacks up nicely against its 8 GB Grenada based counterparts from the Radeon side. The GeForce GTX 970 while being the recommended graphics card for 1080P by NVIDIA is seen sandwiched between the Radeon R9 290 and the Radeon R9 380X. This is the same performance figures that are seen on the GeForce GTX 780 Ti but usually Kepler falls below Maxwell based GPUs due to their better processing at certain graphics features that Maxwell leverages from such as HFTS and HBAO+. You can check out the benchmarks below:

The game is quite optimized but since its beefy in the visual department, the high-end cards will be getting the best performance for higher resolutions. The GeForce GTX 970 for instance is great for 1080P in this title where it can manage more FPS than its competitor, the Radeon R9 390. But 1440P leads to a major decline in total FPS as the card falls down even below the R9 380X levels. The R9 380X yields 28 FPS while the GTX 970 yields 23 FPS. The sudden decline is due to the high VRAM demand from the game and since the GTX 970 doesn't pack a full 4 GB stack (3.5 + 0.5 GB partition), the performance cripples down on the higher resolution. But neither card is built for gaming at that resolution unless or until you have to sacrifice a large chunk from the visual department to get a stable frame rate in the game. On the other hand, the GTX 980 and the R9 390X deliver more than 30 FPS with Ultra preset on 1440P which means they are decent enough to run the game on 2K monitors with ease.

Update #1: Computerbase has just posted their very in-depth analysis and benchmarks of The Division. Their benchmark numbers show NVIDIA cards still in the lead. Unlike the 970s significant fall in performance in the PCGamesHardware benchmark run, Computerbase results show no such performance impact when running the graphics card on a higher resolution than 1080P. It could be an issue that PCGH might have faced during their testing or simply the fact that PCGH is using maxed out detail while Computerbase is using a mix settings config but regardless both websites have posted a very detailed look at the performance and features of the new title. You can see a few benchmarks courtesy of Computerbase below but do visit the website for the full in-depth look at The Division's performance.

The 390 and GTX 970 are great cards for 1080P resolution while 1440P will be demanding either a Fury X or a GTX 980 Ti setup to play the game with a good mix of visual settings and a nice frame rate. The Division can be bought by Steam and NVIDIA GeForce buyers can get the game by buying a select GeForce Maxwell based GPU from the nearest (participating) retail outlet until promotion lasts. Do let us know in the poll below whether you are going to buy The Division or already playing the game on Steam (the game is having server issues right now so you must be lucky to be playing it).