In February, GPU makers will be issuing the second round of game bundles for their graphics cards this year which will include some of the latest upcoming titles. The game bundles will be issued by both, NVIDIA and AMD on a select range of graphics cards. The titles include the highly anticipated Tom Clancy's: The Division and Hitman 2016.

In January 2016, NVIDIA announced their Rise of the Tomb Raider bundle which was redeemable with GeForce cards based on the Maxwell architecture. Rise of the Tomb Raider came with a range of tweaking options that included NVIDIA's HBAO+ technology and AMD's TressFX 3.0 hair render. All combined, Rise of the Tomb Raider is one of the most gorgeous games available to play in 2016. AMD on to other hand extended their Star Wars: Battlefront bundle and added the Fury X to the promo too. Star Wars: Battlefront itself is the most graphically intensive titles available on PCs which utilizes the updated Frostbite 3 engine to showcase the gigantic maps of the Star Wars universe in glorified detail. 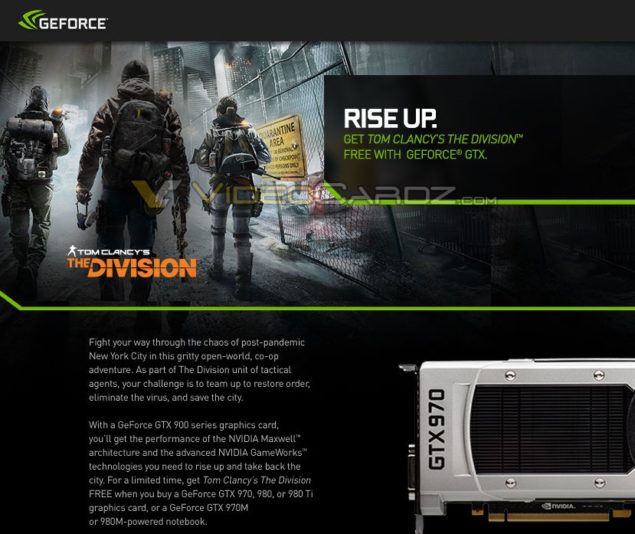 The promotion will run while supplies last and for a limited time. There will be selected retailers who will take part in the promo so do confirm whether your retailer is entitled to provide you the game before buying the graphics card. The bundle is expected to hit retailers shortly and it should also be mentioned that the BETA on PC begins on 19th February so players who want to play the game first hand can sign up for it at the following link: http://tomclancy-thedivision.ubi.com/game/en-us/beta/. 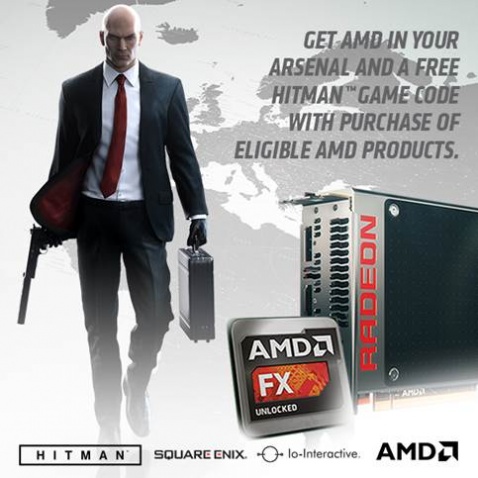 The AMD graphics cards will also be receiving a new game bundle. While the Radeon R9 Fury series cards will get Star Wars: Battlefront promo up till 31st March 2016, the Radeon R9 390 series cards which include the R9 390X and the R9 390 will be getting the upcoming Hitman. The bundle is expected to hit retailers on February 16th, 2016 as reported by Sweclockers and will last up till 30th April 2016. Along with the graphics cards, AMD will also add select FX-6000 and FX-8000 series processors to the promo so buyers who get the new GPU and CPUs should ask for a free copy of Hitman when the bundle goes live, through participating retailers.

The upcoming Hitman is expected to feature the best implementation of DirectX 12 and Async Compute which will be great for Radeon graphics card that utilize hardware based Asynchronous shaders. At GDC 2016, AMD had the following to say:

"Hitman will leverage unique DX12 hardware found in only AMD Radeon GPUs—called asynchronous compute engines—to handle heavier workloads and better image quality without compromising performance. PC gamers may have heard of asynchronous compute already, and Hitman demonstrates the best implementation of this exciting technology yet. By unlocking performance in GPUs and processors that couldn’t be touched in DirectX 11, gamers can get new performance out of the hardware they already own."

The game is due for release on March 11th, 2016 and will also have a BETA available on PC soon. The specs to play the game as recommended by the game developers are listed below: