Nvidia has teamed up with Acer, a leading PC hardware manufacturer to bring a 3D Blu-ray viewing solution to your home, a major step up from its usual business of producing video games related hardware and software. Do note, that Acer's major Asian competitor in the PC making business; Asus has also announced laptops using Nvidia's 3D vision technology.

The company will launch its 3D Vision software on Acer's first 3D-capable 1080p PC desktop display. The display itself will be capable of outputting video at 120 hertz, which is enough for viewing and playing modern day 3D games and videos. What makes Acer's offering unique is the fact that it will able to output video up to 1080p High-Def quality. 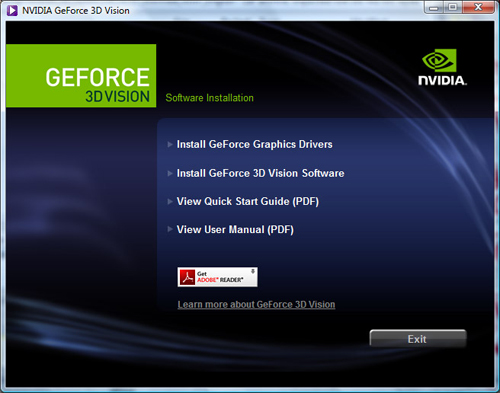 Up until now, there has not been another desktop display available that offers the combination of 120 hertz speed and Blu-ray-compatible 1080p resolution.

While no Studio has yet confirmed any 3D Blu-ray releases, they are expected to hit the shelves in 2010. As for player compatibility, Nvidia says that people will be able to playback 3D Blu-ray Discs on most existing Blu-ray computer drives, when coupled with the new Acer display and current 3D Vision software.

Bryan Del Rizzo, Nvidia senior PR manager of consumer products, believes that the company’s suite of advanced 3D support in the home will eventually prove appealing to the mainstream.

“People’s experience with a lot of 3D films in the home has been lackluster, where the [anaglyph] paper glasses just don’t work,” said Del Rizzo. “It hasn’t been a compelling experience. For this to take off, it really needs to be immersive, with movies and photos and games that add to it too. This is why we think our solution can drive everything forward.”

Acer is expected to publicly announce its launch plans, including pricing details, for the desktop in the next several days.

The Callisto Protocol Officially Partners with AMD, Likely Meaning no DLSS at Launch