Intel Unleashing Core i9-10900K CPU 10-Core CPU, Unlocked Up To 125W TDP, Clock Speeds Will Higher Than Ever Before!

Intel has always kept its TDP envelopes under 95W for most parts but it seems that when faced with the threat of AMD Ryzen processors, it has decided to take off the gloves and unleash its flagship enthusiast part to 125W (Momomo via Videocardz). With the 95W part already capable of hitting 5.1GHz turbo, we can only guess what the 125W part will look like. Chances are you are looking at even higher all-core turbos and significantly higher sustained boost clocks. This is one part where Intel is going to showcase its dominance in clockspeeds to the max.

It is well known that Intel's 14nm process is one of the most mature nodes in existence. With super high yields and a die quality which can sustain insanely high clock speeds, Intel has very little choice but to utilize the only remaining ace it has in its playbook: unleash the full potential of the 14nm process. The Intel Core i9 10900K will be manufactured on this 14nm node and unlike other mainstream processors that usually top out at 95W - will be unlocked up to 125W. This will allow the processor to sustain much higher clock speeds across all cores and boost higher than ever before. I would not be surprised to see 5.1GHz+ boost clocks common on all SKUs and an all-core boost that puts most processors to shame. 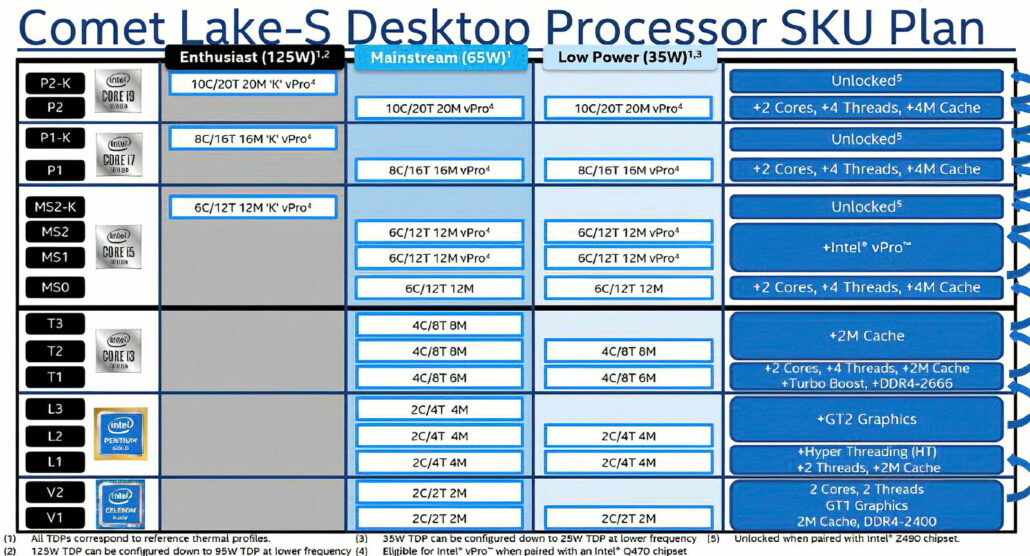 Intel's 10th generation Comet Lake-S series will be hosted on the company's Z490 chipset and will be the company's first mainstream platform to break the 8-core limit and transition to 10-cores. Depending on how Intel chooses to price this, CML-S is one of the few platforms that can give trouble to AMD's Ryzen lineup. The leaked slide shows that Intel is planning to extend the enthusiast side of their mainstream platform to 125W (with an option to configure it down to 95W where required). The mainstream-mainstream part of the lineup will be 65W and the low power lineup will be 25W.

The Core i9-10900K, Core i7-10700K and Core i5-10600K will all be 125W TDP parts. Intel has realized, correctly, that the 95W TDP limitation is something that makes very little sense considering the quality of prevailing power supplies. That additional 30W can make a lot of difference in sustaining clock speeds and will make little to no difference in compatibility with existing systems. Besides, the target market for these is usually enthusiasts/gamers who normally rely on overkill PSUs that can easily handle 30W more. Even OEM builds should be perfectly fine with this slight increase. 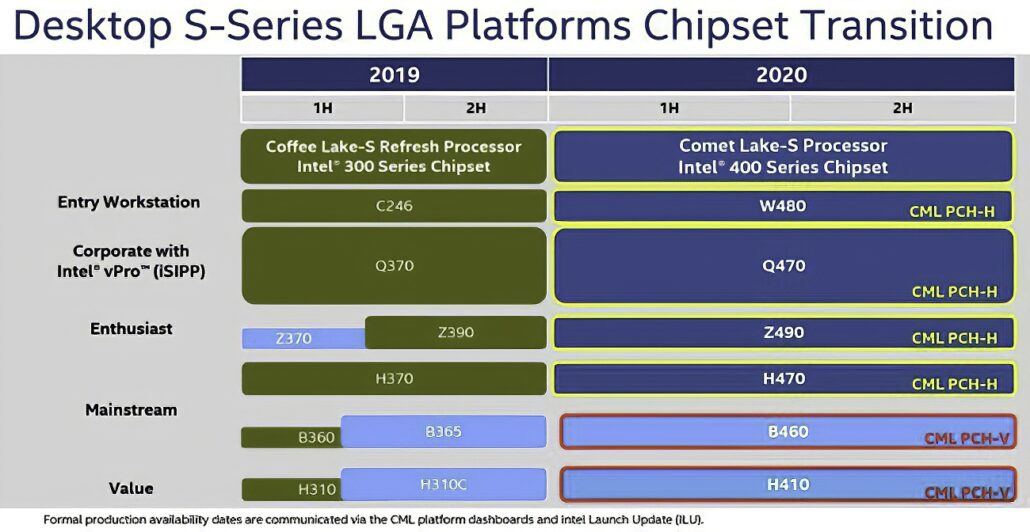 The CML-S platform is rumored to land sometime in 1H 2020 and we will probably see this at CES 2020 with availability in early 2020. This is scheduled to be Intel's last iteration of the 14nm process before 10nm processors start to hit the market in late 2020. If the specifications are to be believed (and there is no reason for this leak to be inaccurate) then Intel's 14nm is going to go out with a bang - as one of the most successful processes in the company's history.

What we know about Intel's 10th generation processors so far