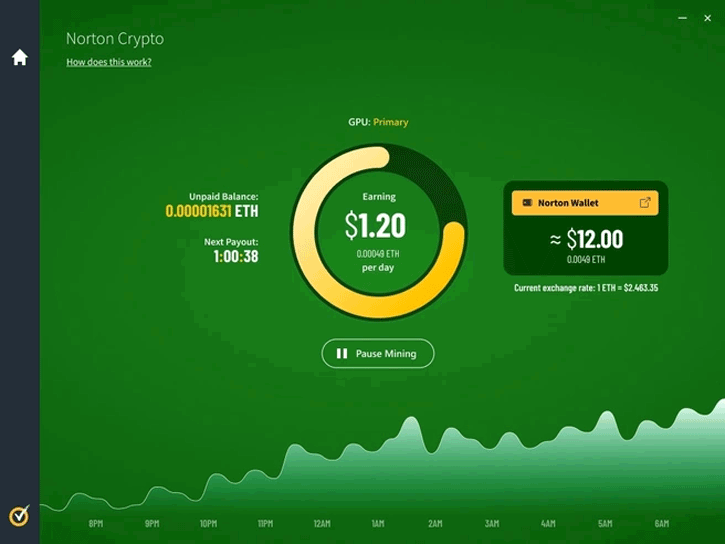 It's been found out recently that Norton 360 is installing crypto mining software on the computers of its users. What's even more unsettling is the fact that the crypto mining software that Norton installs is not that easy to remove by itself. If you think it's an exploit or a rogue programmer, think again, as Norton also skims a commission off the cryptocurrency that's mined.

So, let's start with the implementation of the software itself. Norton 360 recently included a new Norton Crypto program that allows users to mine the Ethereum cryptocurrency while their computer remains idle. As the FAQ puts it:

Norton Crypto is a feature made available in Norton 360 which you can utilize for mining cryptocurrency when your PC is idle. Currently, Norton Crypto is limited to users with devices that meet the required system requirements.

According to the FAQ, the Cryptoming process happens on a voluntary basis and it can be turned on or off by the users. Surprisingly, this crypto miner has been available since July 2021. However, the feature was only available to some users. Now, it seems like the company is performing a wider scale release as the mining software is currently being installed as part of Norton 360.

However, several users have found out that, once opted in the program, they are not able to easily opt-out of the program. In fact, you have to go out of your way if you want to remove the crypto mining software from your system entirely.

Their is no way to prevent it from installing on your system or disabling it. You have to physically delete the NCrypt.exe in the Program FilesNorton directory and there is no guarantee it does not come back with a software update or a 3rd party finds a way to exploit it.

Unfortunately, some users have also reported that the program itself (NCrypt.exe) is also pretty hard to uninstall. Some users have reportedly not been able to remove the program even with administrator privileges. Some users even claim that Norton Crypto embeds itself into the user's registry, making the process of deleting it more complicated.

I can't get rid of it and I have admin permissions...

Users who decide to opt-in (voluntarily or otherwise) to Norton Crypto will also find that the company is going to charge a 15% fee for every Ethereum currency once it's mined. Additionally, the company will also have transaction fees for events such as moving the gathered cryptocurrency to another wallet.

As the FAQ states:

Norton Crypto is included as part of Norton 360 subscriptions. However, there are coin mining fees as well as transaction costs to transfer Ethereum. The coin mining fee is currently 15% of the crypto allocated to the miner.

Currently, the crypto miner offered by Norton is not seen as a security issue for the reason that it can be turned off by the users. However, it's worth noting that Norton has a very troubled relationship with its userbase.