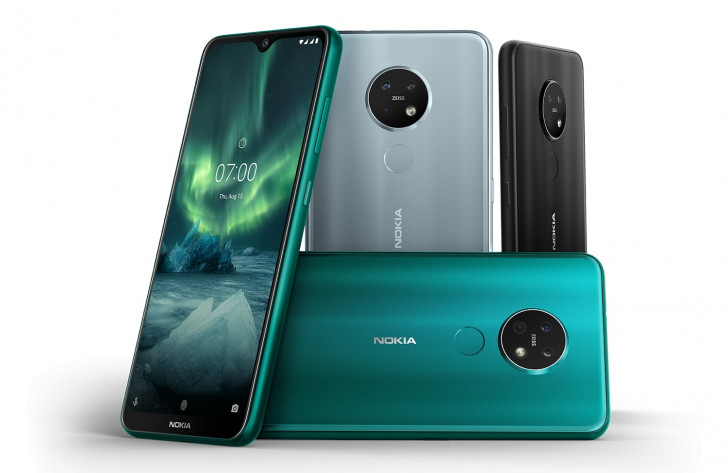 HMD Global announced the release of two new Nokia devices today; the Nokia 6.2 and Nokia 7.2. Nokia's naming scheme for devices can be a tad annoying, and I hope that they can opt for something less confusing in the future. Both devices will be part of Google's Android One program and retail in the sub $500 segment.  Let's take a look at their specifications:

The Nokia 6.2 comes with a 6.3-inch HDR-ready IPS LCD panel with an FHD+ resolution. Under the hood lies a Qualcomm Snapdragon 636 SoC coupled with 3/4GB of RAM and 32/64GB of internal storage. The rear camera array consists of a primary 16MP primary sensor assisted by an 8MP ultra-wide lens and 5MP depth-of-field sensor. Lastly, the Nokia 6.2 is powered by a 3,500mAh battery, has a headphone jack, and charges via a USB-C port.

The Nokia 7.2 is the more impressive device of the lot. It is powered a by a slightly more potent Snapdragon 660 SoC coupled with 4/6 GB of RAM and 64/128GB of internal storage. The primary camera sensor is 48MP and is assisted by an 8-megapixel ultra-wide-angle lens and 5-megapixel depth sensor. The Nokia 7.2 includes Zeiss certified optics with extra bokeh modes within the camera app that replicates the look of classic Zeiss lenses. It has the same 6.3-inch panel as its sibling and is powered by the same 3,500mAh battery.

Both devices will ship with Android Pie out of the box and will get Android 10 sometime next year. They'll both support two SIM cards and have a dedicated Google Assistant button (think of the Bixby button, but useful). Additionally, they'll be the first Nokia device to feature a dedicated Night Mode to assist in low-light photography.

The Nokia 7.2 goes on sale at the end of September and starts at €299 for the 4/64GB variant, then €349 for the 6/64GB model. It will be available in three colour variants namely Cyan Green, Charcoal, and Ice (white). The Nokia 6.2 will retail at €199 for 3/32GB and €249 for 4/64GB. It will be available from October in Ceramic Black or Ice (white). I'd recommend giving these a shot if you want a Stock Android device with decent hardware and a headphone jack. You can also rest easy about updates as they're a part of the Android One program.