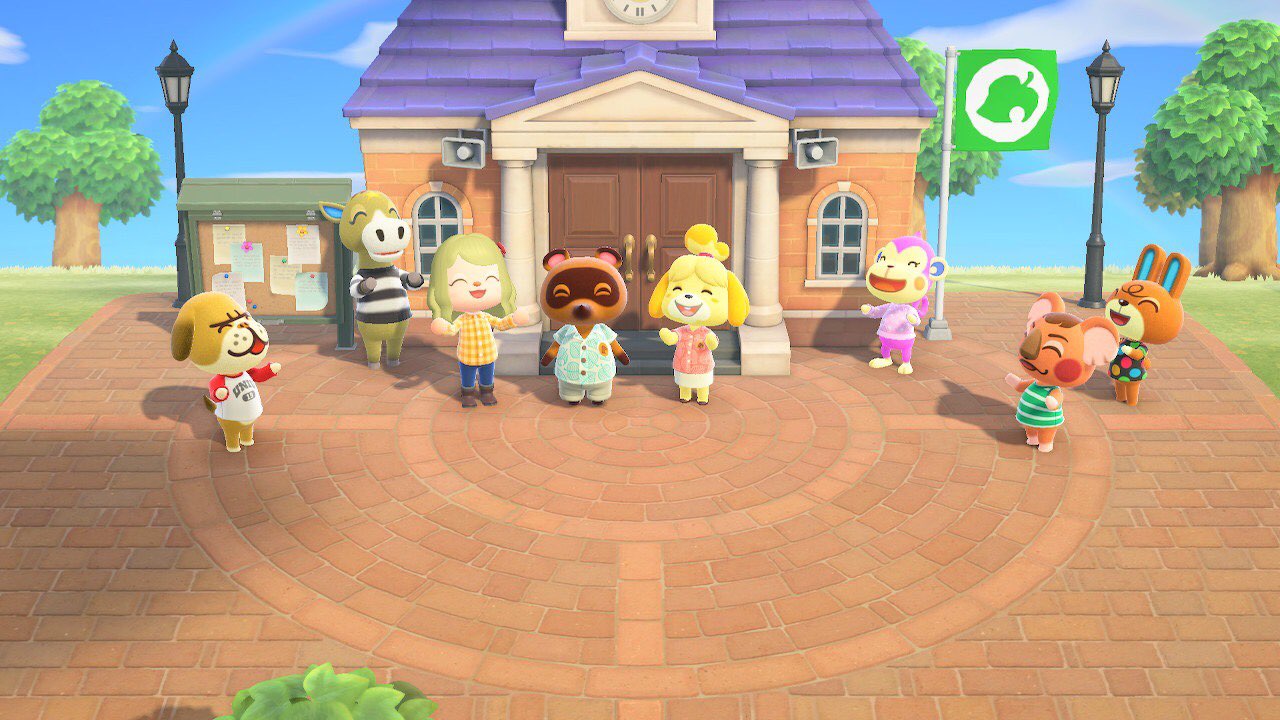 Video game title and console developer Nintendo Corporation disclosed earnings results for its first quarter of the fiscal year 2021 (Q1 FY21) at the close of trading hours in Japan today. As opposed to the results that Sony Corporation posted earlier this week, Nintendo has had a breakout quarter, with the company's revenue, operating income and net income being fuelled by a substantial jump in the sales of its popular Switch and Switch Lite gaming consoles.

Subsequently, year-over-year, today's earnings report marks for growths of 108%, 428% and 541% in revenue, operating income and net income respectively - in what might be not only its best quarter in history but also the best quarterly results that any company has posted in a global economy struggling to recover from the effects of a pandemic. 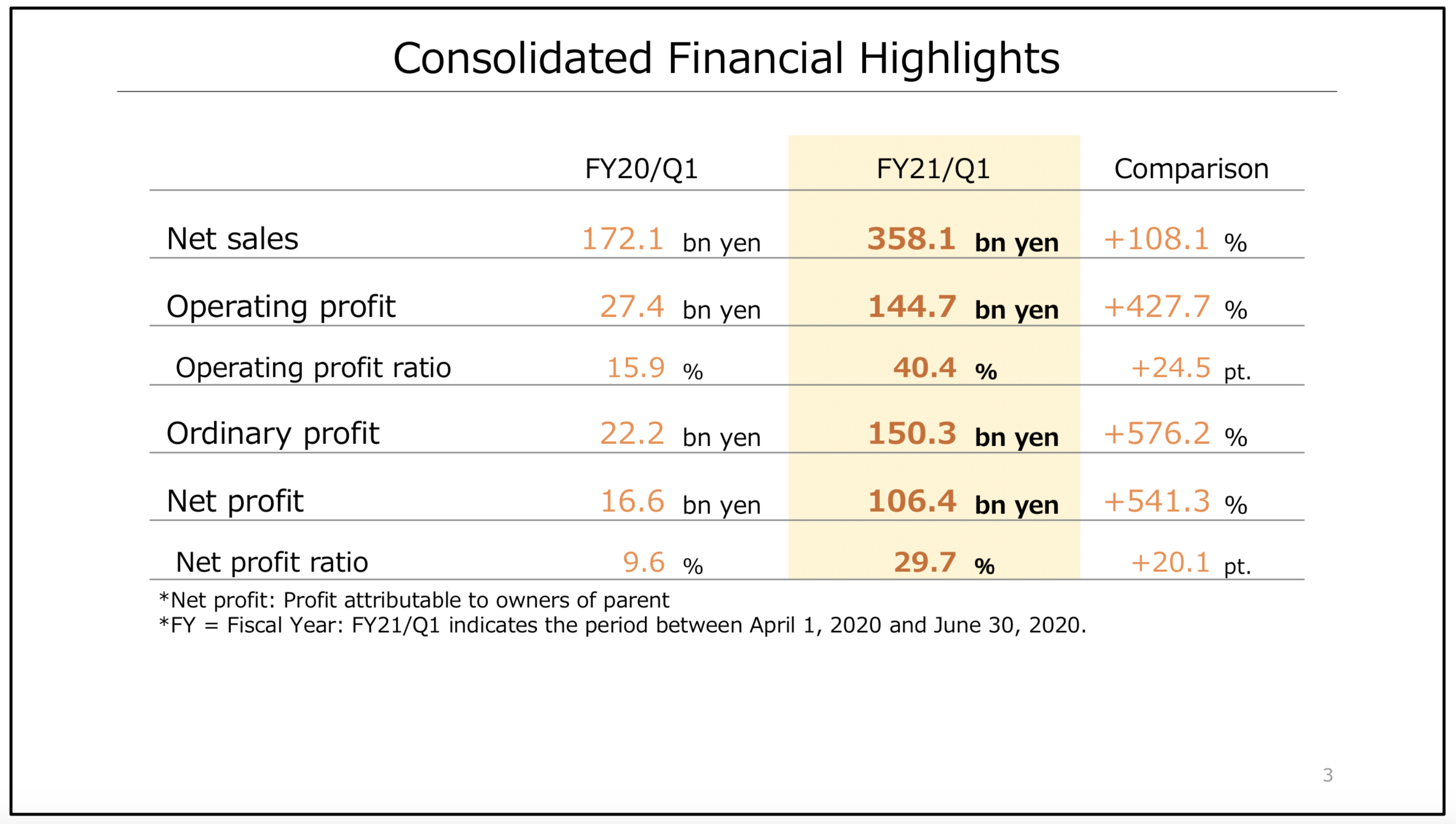 Leading the way in this revenue growth for the quarter was the Nintendo Switch gaming console which posted both sequential and year-over-year sales increases. During the three months that ended in June, Nintendo 5.68 million units of the Switch console lineup. Out of these, 3.05 million units were the older Switch and the remainder belonged to the newer Nintendo Switch Lite. When compared to the 2.13 million units of the Switch console family that Nintendo shipped in the previous fiscal year's first quarter, the previous quarter's figures mark for a staggering 166.6% year-over-year growth.

As a result, Nintendo's overall software sales joined its hardware sales in reporting astounding growth during a quarter in which corporations continued to struggle from the economic fallout of the coronavirus. Nintendo sold 50 million software units during the quarter which marked fo 123% year-over-year growth. 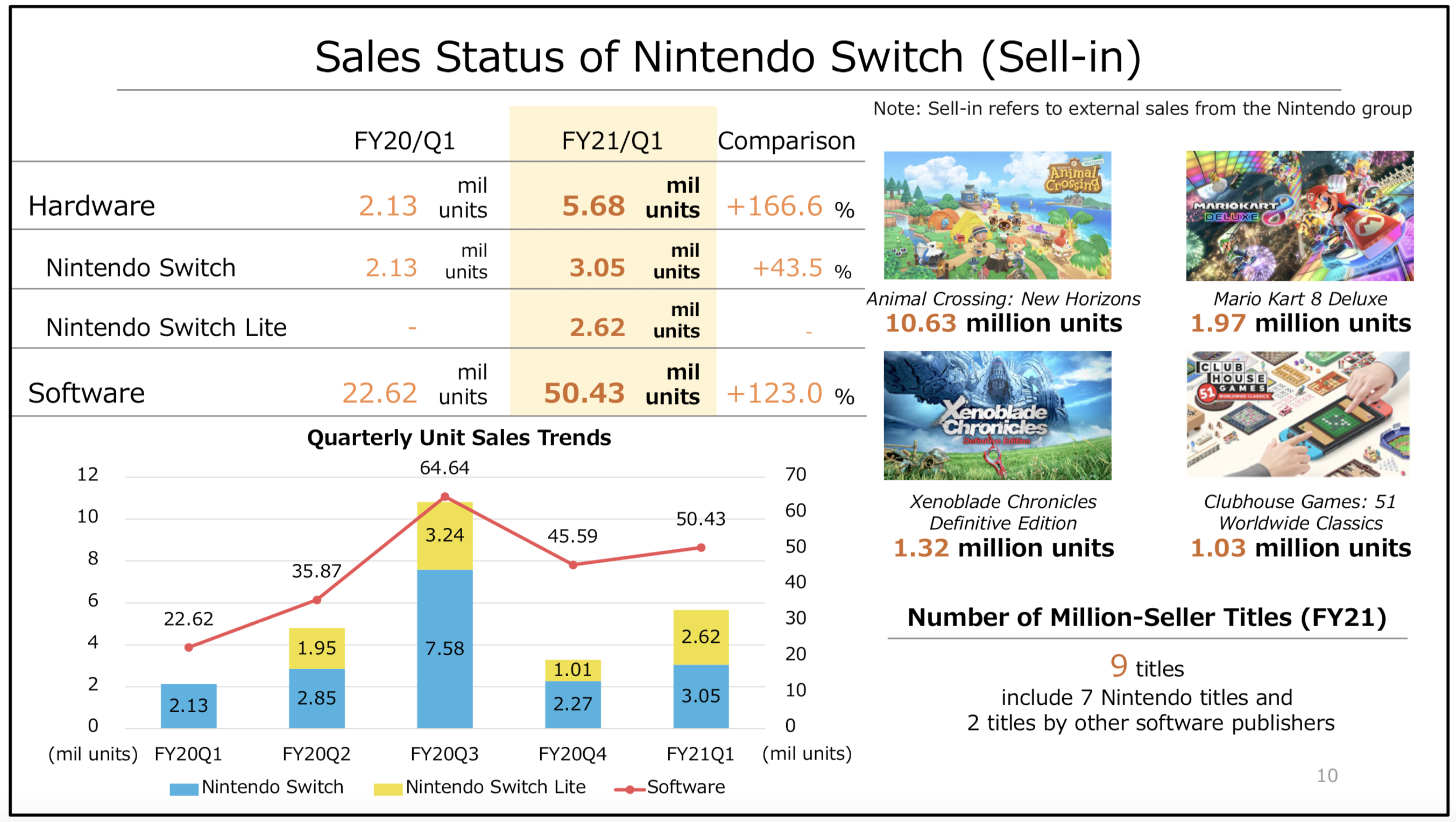 Nintendo also provided positive details about the on-ground situation surrounding its Switch manufacturing. According to the company, while it did face supply chain procurement issues in sourcing the different components for its consoles, the situation has nearly resolved to reach pre-pandemic levels. Additionally, due to shipping times, some regions continue to face Switch shortages for the time being.

Finally, Nintendo kept its fiscal year 2021 forecasts unchanged at the latest earnings release. Based on these forecasts, the company still expects to earn ¥1.2 trillion in revenue, ¥600 billion in operating profit and ¥200 billion in net income. All of these forecasts still mark for annual drops over last year's results as the company braces itself for a virus-laden year despite posting break out results for the previous quarter.

Nintendo also revealed that the first gaming title that more than half of new Nintendo Switch users played during the previous quarter was Animal Crossing: New Horizons. Looking at the future, it's unlikely that Nintendo will be able to emulate this quarter's results once again, given the current bleak economic outlook. Yet, it's entirely possible for the company to surprise us once again as it did during the previous quarter.