Nintendo has yet to reveal its next console, currently known as NX, and rumors about it have been circulating online ever since the Japanese company acknowledged its upcoming new console. A few hours ago, some rather interesting rumors have emerged online thanks to a person who has shown to have inside knowledge in the past.

According to Emily Rogers, the Nintendo NX prototype had a 6.2 inch 720p multi-touch screen. This might be changed in the final product, so she isn't sure if the screen will be larger or smaller than the prototype 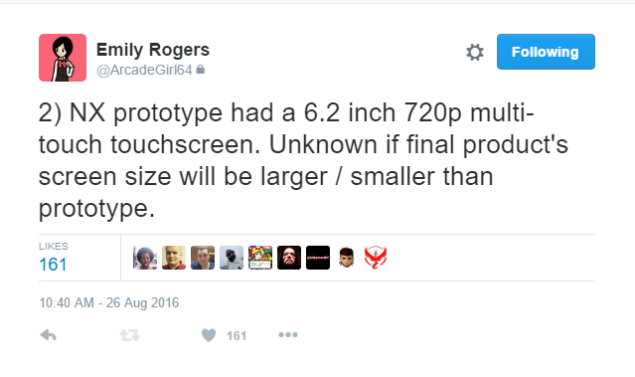 Emily Rogers also shared some details on the dock station prototype, which apparently features 2 USB ports. Like for the screen size, we cannot know for sure if things will be diffetent in the final product. 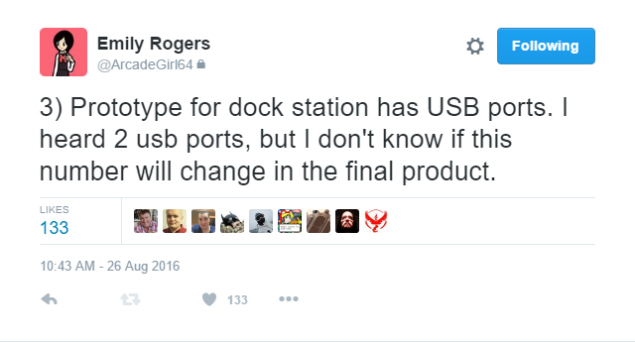 Lastly, Emily Rogers also revealed that earlier reports stating that GameFreak is being involved with the NX have some truth to them.

A lot is riding on the Nintendo NX, and the Japanese company cannot afford to make the same mistake they did with the Wii U. In a recent interview, Reggie Fils-Aimé talked about the company's strategy for the upcoming console, noting how they will have to do a better job communicating the positioning for the product and helping people to understand its uniqueness.

The Nintendo NX will launch during March 2017. We will keep you updated on the console as soon as more comes in on it, so stay tuned for all the latest news.