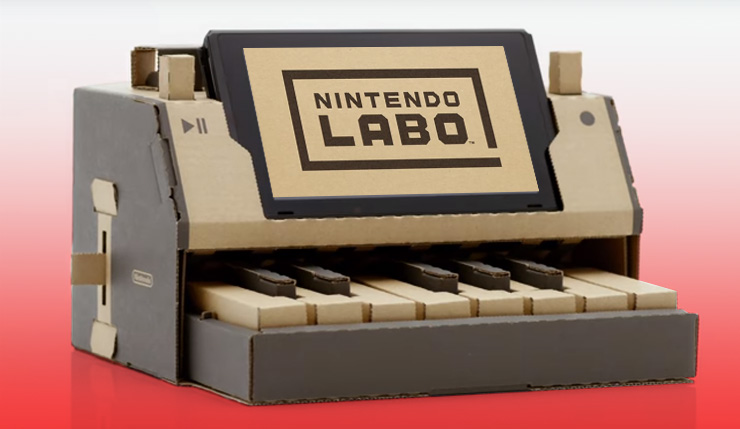 When Nintendo teased a “new interactive experience” this morning, I don’t think anybody was expecting this. The publisher has announced Nintendo Labo, a new series of build-it-yourself cardboard peripherals, which you can “power up” using your Nintendo Switch and Joy-Con controllers. This kind of has to be seen to be believed, so check out the trailer, below.

“Make. Play. Discover. Nintendo Labo combines the magic of Nintendo Switch with the fun of DIY creations! Start with a piece of cardboard, and build...a 13-key piano, a fishing pole, even a motorbike. Add your Nintendo Switch console to power it up and...hold a recital, catch a fish, or win a race.

With Nintendo Labo, building is just as much fun as playing. Have fun discovering how it works -- you might even invent new ways to play with each Toy-Con creation. That's Nintendo Labo. What will YOU create?”

I’m sure Nintendo Labo will inspire plenty of derisive snorts from “hardcore gamers,” but given the continued success of building toys like Lego and newfound popularity of Google Cardboard and other low-fi “tech,” its hard to criticize this move. Maybe Nintendo Labo will fizzle, but it could also be the thing that gets parents buying Switches for their young kids (right now, it’s still mostly adults and teens buying the system). As a new father myself, I hope this crazy experiment works out.

Nintendo Labo launches on April 20th. Nintendo will be offering two packages – the Variety Kit, which includes RC Car, Fishing Rod, House, Motorbike, and Piano projects, and the Robot Kit, which lets kids create a crude robot exoskeleton for themselves. No, really. The Variety Kit will cost $70, while the Robot Kit will set you back $80.

What do you think? Is this a brilliant move, or has The Big N truly leapt off the deep end?