Shares of electric vehicle manufacturer Nikola Corporation continue to maintain their upward momentum from yesterday's 40% gain in the pre-market today as investment banks Credit Suisse, Deutsche Bank and JPMorgan weigh in on the company's important partnership with General Motors. This partnership, announced yesterday, will enable the American automotive giant to take an ownership stake in Nikola and allow both companies to co-operate on developing electric and fuel-cell powered trucks.

In the first analyst note for today, investment bank JPMorgan Chase's analyst Brian Brinkman expressed his optimism on Nikola's partnership with General Motors. As part of this, Brinkman raised JPMorgan's Nikola price target to $37/share and recommended investors to rely on the stock to generate more returns for their portfolio when compared to shares of Nikola's peers in the form of an Overweight rating.

The analyst also provided details about the agreement between the two companies, which will enable General Motors to increase its presence in the electric vehicle market. According to the details sourced from investor note aggregation platform The Fly, Brinkman informed investors that:

The deal will see GM engineer and contract manufacture a pickup truck for Nikola, supply two different variants of the truck with batteries and hydrogen fuel cells, and separately become the exclusive provider outside of Europe of hydrogen fuel cells for Nikola's core Class 7/8 long-haul commercial trucks, Brinkman tells investors in a research note.

Not only will Nikola partner up with General Motors for developing electric trucks, but the former's stock purchase by the latter will also enable General Motors to make a nice chunk of capital gains. According to the agreement between the pair, General Motors will pay $41.93/share for roughly 47 million Nikola shares for a total value of $2 billion. Based on Nikola's closing share price of $50.05/share on Tuesday, the value of these holdings will have appreciated by $400 million, as Brinkman also points out in his investor note. 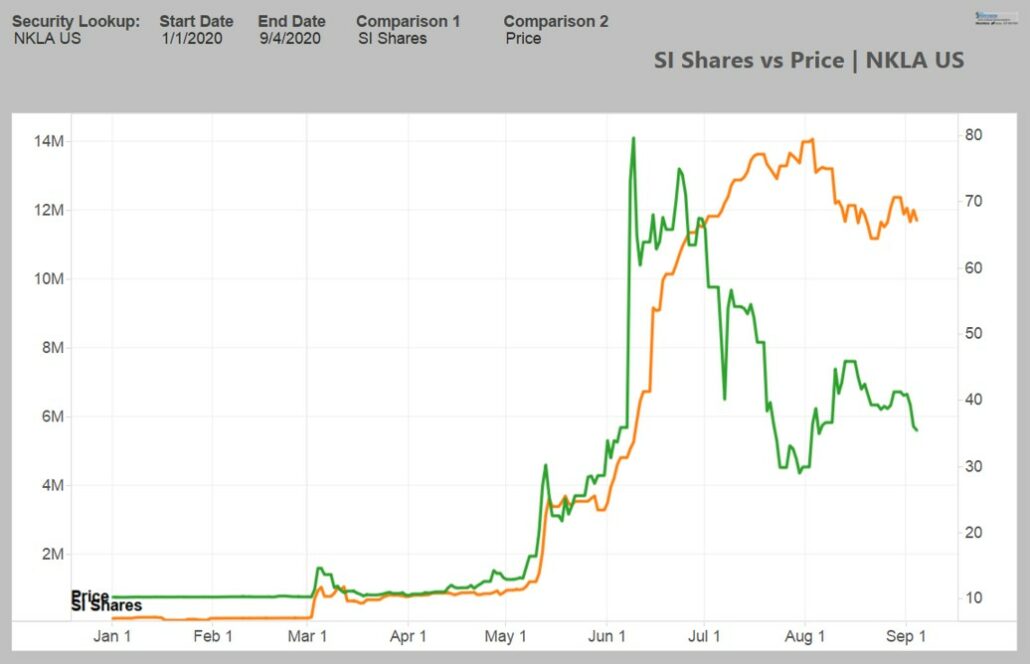 At the close of trading last week, short sellers of Nikola Corporation's shares had lost roughly $385 million over the course of the year according to research firm S3 Analytics, LLC. The data above from S3 shows shares shorted and share price trends for Nikola. Image: @ihors3/Twitter

After having announced a short term buy catalyst call for Nikola earlier, Deutsche analyst Emmanuel Rosner has now closed this call following the company's new partnership. The analyst continues to recommend that investors hold Nikola stock in their portfolio and is very optimistic about the company's deal with General Motors. Like others, he also cites the benefits of the partnership to General Motors, with the automaker expected to expand its addressable market following the agreement.

Rosner also believes that the partnership with Nikola will "validate" General's Ultium battery as a product that can be used by several automakers to allow the company to not only expand the scope of the battery's production but also to bring down the costs of manufacturing through this scalability.

Echoing Deutsche's sentiments, Citi Group analyst Dan Levy agrees that Nikola's business opportunities have received crucial vindication following yesterday's partnership. He focuses his attention on General Motor's expansion into electric vehicles and like Rosner, expects that the latest move by the automaker will enable it to bring down the costs of this expansion.

The partnership with General Motors is the second in a series of positive news for Nikola – news that has grown the company's market capitalization. The first such event took place last month when Nikola managed to secure an order of 2,500 trucks from waste disposal services provider Republic Services. Announcement of the deal sent Nikola's shares surging by roughly 20%, with deliveries expected to commence in 2023.