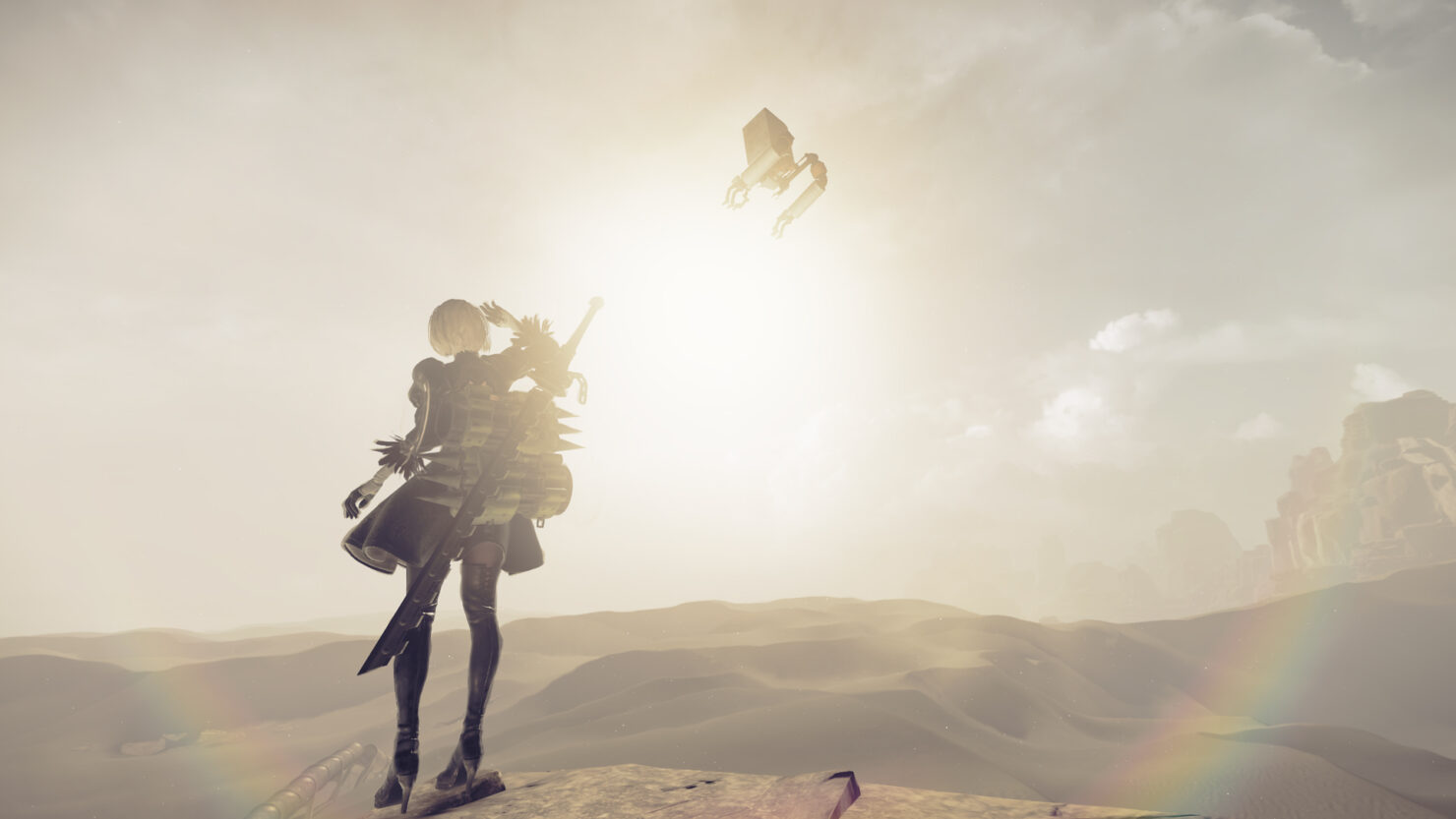 The team over at Gematsu went ahead and translated a Famitsu article detailing the battle systems for NieR: Automata complete with screenshots.

Below is the breakdown of the battle systems, from controls to the brand new auto-mode for easy difficulties.

NieR: Automata is set in the distant future, when the human race fled to the moon, before the overwhelming strength of the machines dispatched by otherworldly invaders. Players will throw themselves into battle as YoRHa No. 2 Model B, part of a newly organized android unit meant to reclaim earth.

An easy to use weapon balanced in attack power, speed, and range. Combos are easy to connect with an abundance of technique variations. The weapon exhibits its effectiveness regardless of the battle situation.

A two-handed sword both heavy and big. It has tremendous power and long reach, but since its attack speed is slow and it’s easy to leave an opening, it’s important to use with caution.

Although their attack range is small, melee weapons are fast and allow for numerous attacks. Since it’s easy to continuously attack with them, their power is unmatched in one-on-one combat.

In NieR: Automata, battles play out seamlessly on the open world field. The Square button is your speedy attack and the Triangle button is your heavy attack. Depending on the buttons you input, the character will unleash attacks one after the other. It’s a simple and exhilarating battle system.

You can evade with the R2 button. You can evade at any time during battle, and by using the analog stick with the R2 button, you can do an evasion dash. These arc-like dodges are one of the features of this game, and can be seen in the previously released trailers. Additionally, if you successfully evade the moment an enemy attack hits, your body will change into a particle state and be invincible for a fixed time. You can connect exclusive techniques if you attack during this time.

■ Pods You Can Upgrade

You can use your Pod support system with the R1 button to gun down enemies from a distance. It will automatically line up its shots with the enemy, but you can also lock onto targets with the L2 button. However, the bullets will disperse to some extent in such a situation. By spending money and using materials, you can upgrade your Pod at the maintenance shops found all throughout the game. In addition to raising its basic abilities like attack power, you can also increase its attack variations.

■ An Auto Mode for People Bad at Action Games

NieR: Automata is an action game, but there is an “Auto Mode” for users who are bad at action games. By activating this mode, the character will attack and evade automatically. The player will win the battle as long as they move the character around. This mode is restricted to the easy difficulty setting. You can also set the extent to which it is used, such as only for close-range or long-range attacks, or only for evasions.

NieR: Automata will launch in Japan on February 23 for PlayStation 4, while gamers located in North America and Europe should expect a release for PlayStation 4 and PC (Steam) in early 2017. The screenshots below show each of the weapon types and new environments.