Nexus One losing the market

We see Nexus one loosing the battle in the mobile industry with more than just a fair margin. Google sold 20K Nexus Ones in its first week of sales, but now reports show that it has only sold 135,000 in the 74 days of it being launched. It looses with a huge margin compared to the Motorola DROID, another Android handset which sold 1.05 million in its first 74 days as compared to the 135,000 of Nexus Ones sold. A huge difference you may notice. Most reports indicate that Nexus Ones  handset appeal hasn't been actually felt by the public at large, and seems to be in the shadows for now. Lets hope it gets successful and prosperous soon enough. Or shall it fall?. We gotta wait and see.

A graph after the jump. 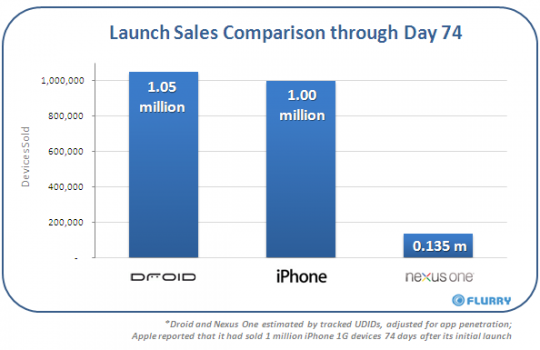