Those of you who are still at home waiting for the last minute goodness, this is it. Get your wallets out because Newegg has just started its ultimate Black Friday Sales. This is one helluva sale with tons of deals of every kind.

Playstation 4 and Xbox One Ultimate Deals

This sale literally has every single ting you can think off. It even has the Tegra powered Nvidia Shield with a decent $50 shaved off its usual price. You have an 8GB Kit of Ripjaws X for only $50. The new haswell i5-4670k unlocked process is up for only 209 Dollars as well. There are IPS LEDs out there with massive discounts ranging around a hundred dollars. Polk's monster loudspeakers are also up for grabs for only 150 Dollars (Regular: $349). Not enough for you? 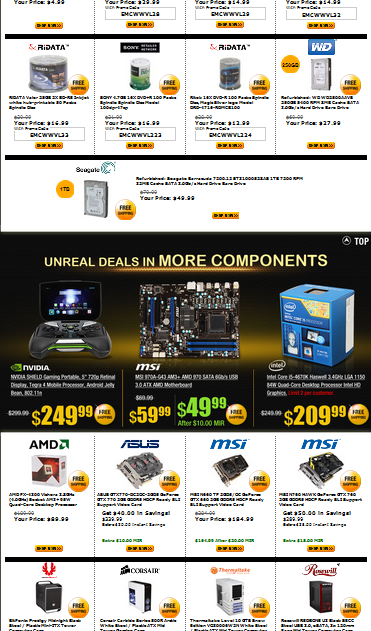 How about the fact that there are professional quality cameras for half the price? Or the fact that coupled with their normal Black Friday sale (ongoing) this is the best opportunity you are going to get to buy really really good stuff at super cheap prices. Unlike walk in Black Friday deals, you dont even need to worry about breakage or lines, just click!