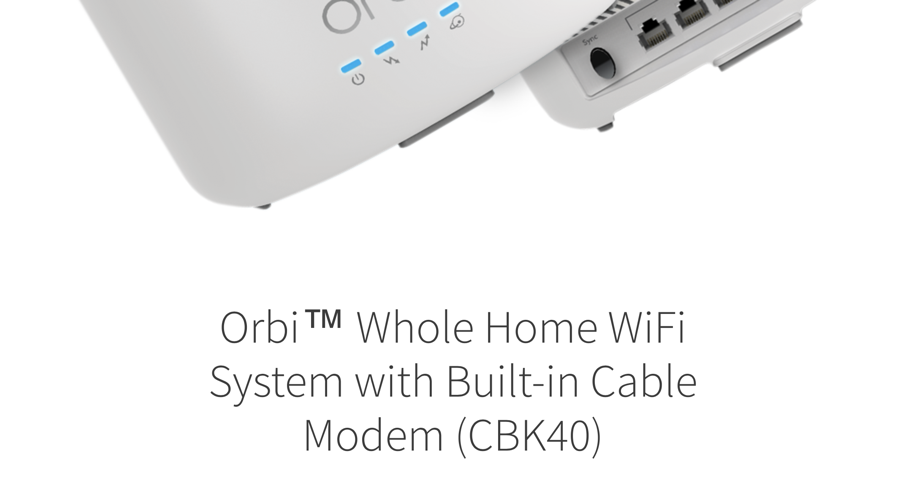 Netgear just announced a major leap forward in the mesh WiFi system game with the announcement of its brand new Orbi Tri-Band Wi-Fi Cable Modem Router System. Quite a mouthful, but something which you should look into.

There are many mesh WiFi systems out there right now and all promise to do the same thing out of the box: provide you with excellent coverage, fast wireless connectivity and no dead zones. Netgear's latest product pretty much does the same thing but has an extra trick up its sleeve. See, rather than just calling it a 'WiFi system,' it actually goes beyond its realm and combines a cable modem in the entire package too. This means that you can ditch that almost-useless cable modem that was lended to you by your ISP and make the new Orbi do all the legwork.

If you aren't familiar with the Orbi mesh system, then you won't find surprises here. It's a tri-band system that's blazing fast, offers excellent coverage. But over here the 'modem' bit has us most excited. It supports DOCSIS 3.0 which means that you can get theoretical speeds of up to 1.4Gbps as long as your ISP can support it as many top out at just 1Gbps, so needless to say that this thing is future-proof in all regards.

On the inside, it features a fast quad-core processor that aids in insanely fast 4K steaming as well as WiFi speeds of up to 2.2Gbps. I know the nerds are immediately going to point out the obvious here so we'll save the trouble of saying it anyway: those speeds are shared between three bands in total and one single device, regardless how fast it is, will never ever get those speeds. The 2.2Gbps space does wonders when you have a multitude of devices at home such as smart hubs, light bulbs, TVs, consoles, PCs, tablets, phones - you get the idea.

The new tri-band system even works with Google Assistant and Amazon Alexa. We're not certain at this point whether or not it will eventually work with Siri or Cortana. But still, two of the largest players are on board and we couldn't be more happier at this point.

On its own, the new Orbi Tri-Band Wi-Fi Cable Modem Router System will set you back $299. It even comes in a bundle of an extra Satellite for extending your network which will set you back $399. Not exactly cheap, but you're getting a lot of features and WiFi for that price.

You can, of course, buy Satellite points later on if you wish to extend your network even further. Or even take it outdoors if you like. The possibilities are endless.

If you are eager to learn more, then make sure you head over to this link.