Netflix is the Stock of the Decade with Over 4,000% in Returns; Meanwhile the “War of the Eyeballs” with Cinemas Escalates 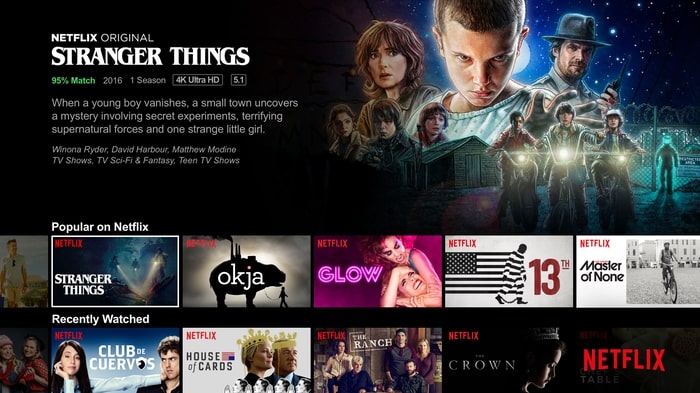 Netflix’s (NASDAQ:NFLX) ever-growing heft manifests in a variety of ways these days. This week, the CEO of Cineworld – Mooky Greidinger – vented his anger at the company for rendering the box office release of ‘The Irishman’ essentially meaningless by allowing the movie to be streamed natively within a short time span.

These expressions of gripe highlight a long-running stand-off between cinema owners and Netflix where the streaming giant’s propensity to opt for a swift online release of its original content leaves cinema owners with an ever-shrinking piece of the pie.

As another illustration of Netflix’s increasing influence, it has now donned the mantle of ‘the stock of the decade’ with returns of 4,181 percent as of last Friday’s closing price. We will discuss this milestone in the latter part of this article.

The CEO of Cineworld – the second-largest cinema group in the world – accused Netflix this week of preventing a box office hit for The Irishman. This protest by Mr. Greidinger does appear to be grounded in facts given that the movie was released in American cinemas on the 1st of November and became available for streaming on the 27th of November. Moreover, about 26 million people streamed the movie on Netflix within the first week of its online release.

“The Irishman lost a lot of box office. A Scorsese released properly in cinemas would have generated a nice income.”

Netflix has released 10 films in cinemas since September. However, the streaming giant has allowed only a few weeks for the box office viewing before making these films available on its platform.

As Netflix and other streaming services continue to up the ante, the wider film and cinema industry is currently undergoing a substantial consolidation. For example, the UK-based Cineworld announced in December a $2.1 billion acquisition of the Canadian cinema chain Cineplex. This follows Cineworld’s reverse takeover of the U.S. cinema group Regal for $3.6 billion last year.

In what is emerging as a “war of the eyeballs”, Jeff Bock – a senior box office analyst at research firm Exhibitor Relations – said in an interview with the Financial Times:

“We are talking about cinema versus streaming and it’s happening right now. Pulling all of that talent towards streaming is a huge deal for cinemas.”

He also added that viewers were tired of “lazy sequels” and that studios must adopt a proactive approach if cinemas are to thrive (in the digital age).

Stock of the Decade

As of the stock’s closing price last week, Netflix has registered a gain of 4,181 percent this decade. This means that a $1 million investment in Netflix’s stock on 1st of January 2010 would be worth over $40 million today. The cumulative returns posted by Netflix in the past 10 years materially exceed those posted by every other member of the S&P500 in the same timeframe. Interestingly, the S&P500 index has registered relatively modest gains of 189 percent during this decade. 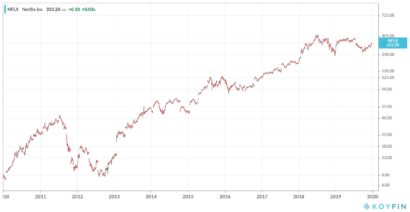 As of the third quarter of 2019, the streaming giant’s total subscribers were measured at 158.3 million, a two-fold increase in the past 4 years. In a December 2019 filing, Netflix detailed the geographic segmentation of its subscriber base for the first time. After North America, the region consisting of Europe, the Middle East, and Africa is the largest geographical segment for the streaming service with 47.4 million paid subscribers. This is followed by Latin America with 29.4 million and Asia-Pacific with 14.5 million subscribers.

The meteoric trajectory of Netflix’s stock has often confounded those investors who base their investment decisions on fundamental financial metrics, such as profit margin and free cashflow. The company habitually runs on a thin operating margin and has negative free cash flow due to the heavy cash infusion that original content delivery entails. Moreover, Netflix will have to increase these cash infusions in the coming years in order to maintain its lead amid an onslaught of new competition from the likes of Disney (NYSE:DIS) and Apple (NASDAQ:AAPL). As an illustration, the company spent about $15 billion on content in 2019 and has borrowed about $10 billion in the past two years to fuel its spending spree. Consequently, the streaming giant’s debt load has ballooned with the crucial debt-to-equity measure currently registering at 181 percent.

Given the magnitude of challenges ahead for the company, it appears that investors are growing somewhat cautious vis-à-vis Netflix’s prospects. Case in point, the stock’s 24.49 percent year-to-date gain trails that of the NASDAQ Composite by 10 points.