Chinese publisher NetEase (NASDAQ:NTES) are a company we've touched upon when covering the growth of mobile games. While not exclusively a games publisher, the company has revealed that games have made up a mammoth 70% of their revenue stream.

Figures revealed that the company's second quarter, ending June 30th, has generated $1.97 billion (13.37 billion yuan). This is a  49.4% year on year revenue increase over the previous year's 8.95bn yuan. Despite this fantastic growth over the year, it's actually a fall of 1.9% on first quarter results. 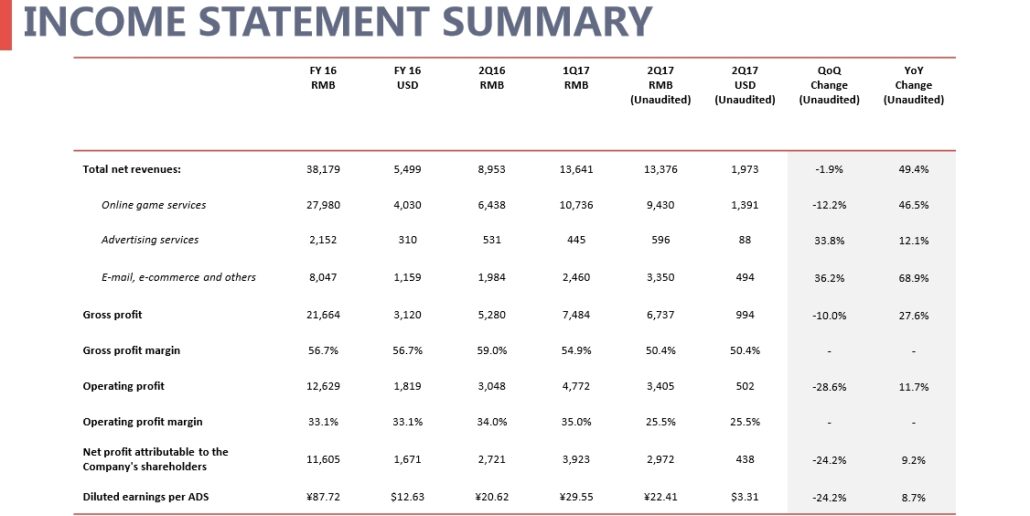 Driving this growth has been the gaming market, generating $1.39bn, a YOY growth of 46.5%. Mobile games in particular are currently a huge market for the company. Making up 72% of the company's gaming revenue. The success of this market has been placed down to a number of titles, particularly the success of titles like Onmyoji, Invincible and Westward Journey Mobile. Invincible also saw itself reach record high quarterly revenues.

PC titles haven't been slouching either. Fantasy Westward Journey saw record high quarterly revenues. NetEase are also the licensee of incredibly popular titles like Activision Blizzard's (NASDAQ:ATVI) World of Warcraft, Overwatch, Starcraft and more. In addition, NetEase are the licensee of Microsoft's (NASDAQ:MSFT) incredibly popular game Minecraft. While not yet released, CFO Zhaoxuan Yang indicated the company has high expectations for the game in the future.

It's Not All About Games

NetEase is also active in E-mail services, online media as well as marketing and e-commerce. 163.com is the company's largest site as well as one of the country's most popular web portals. In addition to 163.com, the company also runs 188.com, 126.com and more, making them the largest e-mail service provider in China with 940 million registered users.

In addition to this are hugely popular applications. These range from social applications to news readers, even offering educational tools. These tools, in addition to their portfolio of websites and games allows for growth in advertising services. Advertising, in particular, has grown 12.1% YOY to $88 million (596m yuan). Further pushing the companys growth are their e-mail, apps and ecommerce areas, which grew 68.9% YOY, generating $494m (3.35bn yuan).

NetEase Easing into the Future

Particularly good news are the plans revealed for the near future. What has been announced are large updates for seven of their largest titles, as well as testing plans for six brand new releases. Furthermore, open beta testing of Minecraft started on the 8th of August.

As one of the world's most popular games, NetEase will look to benefit from their exclusive license for the game in China. Their developments for the game currently include localisation updates as well as upgrades towards social interaction and group play. CFO Charles Yang also revealed in a conference call that plans are to begin initial beta testing of the mobile version soon.

When questioned, CEO William Ding also revealed that plans are for a Q3 2017 launch for Minecraft. One thing that was noted, however, is the slow transfer of players over to NetEase servers. It was indicated that revenue from the game would be low for two to three quarters, while existing players are transferred over.

One of the company's major aims is to expand globally, opening their titles up to a larger market. During the quarter, the game Crusaders of Light was launched globally with the company pleased by the initial reaction. With offices in North America, the release of other popular games globally could see a great boost to the company. In addition Ethan Wang, Vice President, has indicated that the company remains open to opportunistic acquisitions and investments in foreign studios. This is in line with the aim to further expand their reach and diversify their portfolio.

With a large host of games in the pipeline, as well as the proven popularity of Minecraft, this year could be an impressive one for the company.