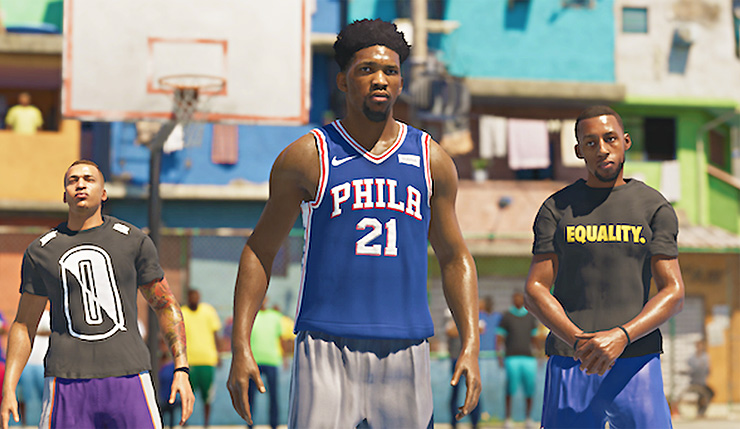 EA Sports has announced NBA Live 19 will be fronted by Joel Embiid of the Philadelphia 76ers. While Embiid isn’t as big a star as NBA 2K19 cover athlete LeBron James, he had a breakout 2017-18 season, leading the 76ers to the playoffs, competing in the NBA All-Star Game, and earning a Defensive Player of the Year nomination. An up-and-comer like Embiid is, arguably, the perfect choice for NBA Live as it attempts to upset the more popular, established NBA 2K franchise.

Introducing the new face of NBA LIVE, @JoelEmbiid in The ONE Edition.

“It’s great, it’s amazing. I’m thankful for this opportunity, especially as a basketball player. You work so hard because you have goals in life, you want to be in the Hall of Fame but also, being on the cover of a video game [like NBA Live 19] is something I’ve always dreamed of and I’m happy to be in this position.”

NBA Live 19 was announced at EA Play Live E3 press conference. Much like last year, the game features The One career mode, which lets players choose to focus on dominating the big leagues or the streets. You can check out a trailer and rundown, below.

In NBA Live 19, you can become The One and embark on a dynamic career that gives you the opportunity to create your legacy on The Streets and in The League. When you’re not furthering your own professional career, Build Your Squad and challenge other squads to prove your dominance on the court.

In NBA Live 19, you’re one of a kind. With a unique skillset led by Playstyles and the all-new Icon Progression system, you can move, shoot, and score just like your favorite NBA players.

NBA Live 19 hits the court on Xbox One and PS4 on September 7.