Yesterday, we showed you a picture of MSI's upcoming Z87 XPower motherboard suited for hardcore enthusiasts and overclockers. Chinadiyhas unveiled a full preview of the motherboard which provides every single bit of detail  and features the Z87 XPower has to offer.

The Z87 XPower is so large in size that it makes the Z87 MPower MAX looks like a midget next to it. It features 32 phase power supply featuring all creamic conductors, fourth generation DRMOS and 330uF tantalum capacitors. These are part of the OC Genie 4 engine and Military Class IV design that provide unprecedented power for overclocking. The Z87 XPower features an 8-Layer PCB and several overclocking switches which can be used to adjust BCLK and FSB settings dynamically without entering the BIOS. There's a Multi BIOS switch which would help in overclocking.

The CPU socket is powered via dual 8-Pin connectors while the electrical parts are seated beneath a large heatsink split in three parts which makes use of heatpipe cooling. The heatsink solution comes with glowing patterns and a large X Logo that glows on both sides in yellow color. The motherboard features a black and yellow design scheme, the second heatsink sits on top the Z87 PCH.

Expansion slots include five PCI-e 3.0 x16 and two PCI-e 3.0 x1 slots. The motherboard offers Quad-Way SLI and CrossFireX multi-GPU functionality and even comes with a PLX chip that adds upto 32 PCI-Express lanes. One of the most intresting feature that the board has to offer is MSI's Ceasefire which is infact a swtich that can disable an unused expansion slot so that it can transfer the extra lanes to an occupied slot for full use.Storage includes 10 SATA 6 GBps ports next to which two USB 3.0 front panel headers are located. The motherboard is supposed to offer 12 USB 3.0 ports, there’s a mSATA slot near the Z87 PCH which can be used to add a WiFi add in card on a M-SATA SSD.

The Z87 XPower is packed with an impressive feature set including OC Genie 4 engine that allows user to adjust between gaming and default mode. In gaming mode, the motherboard would automatically adjust clock speeds to provide users with the most performance out of their PCs when needed while gaming. One can also spot an abundance of super ferrite chokes next to the four DDR3 DIMM slots and also a variety of overclocking friendly features such as Power On/Off, Clear CMOS, Voltage adjustments, clock adjustments and voltage measurement points. I can also spot a BCLK adjustment switch that would allow users to adjust the CPU via motherboard in real-time. This would come quiet handy for overclockers.

The I/O on the motherboard includes two USB2.0 ports, a PS2 port, 8 USB 3.0 ports, Gigabit Ethernet interface and improved audio output interface which include video interfaces including two HDMI and DP along with a clear CMOS switch. Audio is provided through the Audio Boost technology that delivers high quality output. The motherboard is expected to go on retail for a high price around $399. 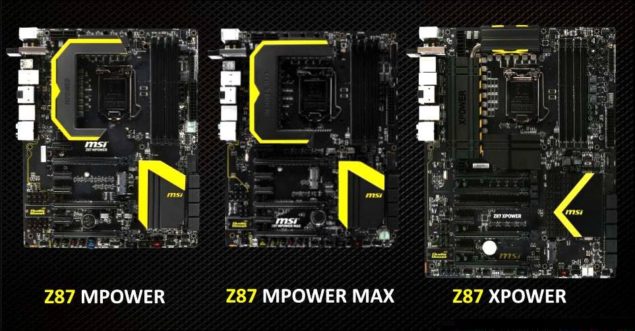