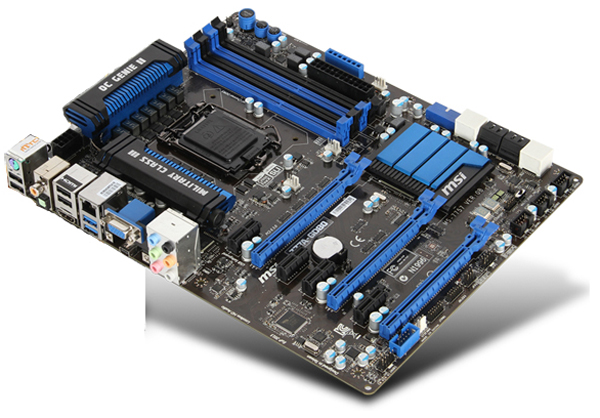 At the time of the CeBIT conference, MSI had previewed its Z77 chipset based Z77A-GD80 motherboard that featured Intel’s revolutionary Thunderbolt interface. After that, no further details had been given over the mentioned motherboard at all. But now, MSI has officially announced the motherboard with the release of its official product images.

The GD80 comes packed with Military Class III components that comes with a massive 22-phase VRM for ultimate overclocking stability. The motherboard packs four SATA 6GB/s ports as well as four 3GB/s ports along with 4 USB 3.0 ports. The board has two PCI-E 3.0 x16 slots with an additional 2 PCI-Express x1 slots.  Having 4 memory lanes, the board supports a total of 32 GB of DDR3 RAM. And as per manufacturer claims, it supports speeds of up to 2666 MHz.

For display out purposes, the board comes with a mini-DisplayPort, HDMI and D-sub video outputs. THX Tru Studio Pro is also supported on this motherboard. Other features that are expected to be on this motherboard are on board power/reset/clear CMOS buttons as well as a dual BIOS and connectors to monitor voltages across the motherboard.