The new lineup features the latest 12th Gen Intel H series processors, up to NVIDIA GeForce RTX 3080 Ti Laptop GPU, and MSI-exclusive thermal solutions, which boosts performance to a whole new level. MSI not only just released the highest-performance laptop in the market but also delivered a series of Meta-Ready laptops to connect users to the Metaverse.

The new MSI laptops boasting the Meta-ready logo are equipped with Intel Core i7 or above processors and NVIDIA® GeForce RTX 3070 Laptop GPUs or above, for anyone who’d like to experience Metaverse-compatible performance.

The GPUs of the Future

NVIDIA GeForce RTX laptops are based on the revolutionary Ampere architecture, with 2nd generation RT Cores for ray tracing and 3rd generation Tensor Cores for DLSS and AI.

The new GeForce RTX 3080 Ti Laptop GPU brings the flagship 80 Ti class of GPUs to laptops for the first time. Featuring 16GB of the fastest GDDR6 memory ever shipped in a laptop, the RTX 3080 Ti delivers higher performance than the desktop TITAN RTX. The new GeForce RTX 3070 Ti is up to 70% faster than RTX 2070 SUPER laptops and can deliver 100 frames per second at 1440p resolution.

Not solely focused on hardware performance, MSI also worked on intelligent technologies for a smoother experience. The latest MSI Center now provides AI modes. The new “Smart Auto” feature will detect which situation you’re in, and automatically adjust the system into different modes, resulting in the best experience for your laptop. The “Ambient Silent AI” feature will dynamically balance fan speed based on the surrounding noise and give the highest possible performance while still keeping the laptop quiet.

The award-winning Stealth GS series is a lightweight powerful laptop for enthusiastic gaming and professional use. GS77 comes with a new “core black” color and a new, more durable, zinc alloy hinge. At less than 0.83” (21mm) for Z height, MSI managed to enlarge the touchpad and keycap size for a precise and comfortable typing experience.

It is also equipped with 6 speakers for crisp treble and powerful bass. Business gamers will benefit from the webcam lock switch and support of up to 100W PD charging for better security and mobility.

MSI Raider GE series is a real eye-catcher and keeps the panoramic aurora lighting which creates an alluring sci-fi ambiance. The performance, however, is even more astonishing; with the innovative thermal design by MSI, the Raider GE series can reach up to a total of 220W via MSI OverBoost. The Phase Change Liquid Metal Pad increases 10% of performance, and with displays of up to 4K and Discrete Graphic Mode, gamers will have a fast and smooth experience with the MSI Raider Series. 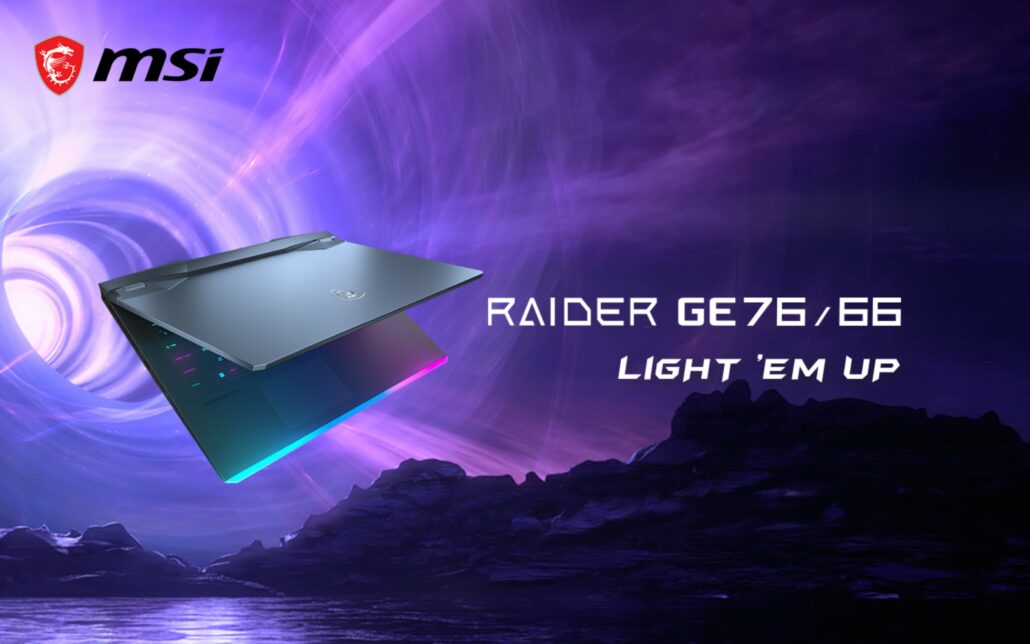 *Phase-Change Liquid Metal Pad only available for Raider GE series and Stealth GS77 with Intel® Core™ i9 processor on configuration for maximized performance.

The Vector GP Series represents a new way of thinking about computing; the name “Vector” was born from users’ experiences in gaming, engineering, and scientific computing. The newly crowned Vector GP series features MSI-exclusive Cooler Boost 5 Technology and performance that can reach up to 210W.

Crosshair GL series is a collaboration between MSI and Ubisoft. The futuristic design featuring exclusive sci-fi elements is inspired by the tension and unsettling mood of gameplay. It is equipped with Intel® CoreTM i9 processors and Cooler Boost 5 Technology, and the graphic performance is at its maximized level, allowing the Crosshair 15 to stand its mid-tier competitors. Crosshair GL Series comes in three variants: Crosshair 15, Crosshair 17, and the limited-edition Crosshair 15 Rainbow Six Extraction Edition that comes with an exclusive bundle pack.

The MSI Pulse GL76/66 keeps the image designed by Maarten Verhoeven - the titanium power armor inspired by Pulse energy for the Dragon Army to enhance agility and flexibility - but adds Cooler Boost 5 that increases 15% airflow with a 33% reduction in wall thickness.

The MSI Sword series has a new knight image with the magical immortal force, “Dragon Power”, wielding an enchanted immortal sword of victory. This knight character is created by Justin Goby Fields, a famous concept artist from the United States. Both Sword and Katana series are set for gamers with a comfortable key journey at 1.7mm and the Cooler Boost 5 Cooling system.

MSI’s new Creator series is now a bigger family with panels up to 17 inches, and the CPU performance is improved by 45% with the new Vapor Chamber Cooler. MSI also added in new features specifically for creators, such as touch support for MSI Pen, Calman verified True Pixel Display, and collaboration with DTS for rich, immersive surround sound effects.

The Creator Z17 is the world’s first 17-inch laptop to support pen touch, and with a 16:10 screen with thin-bezel design and True Color Technology, the perfect companion for creators. The Creator Z16P has an extra 20% performance boost with Vapor Chamber Cooler, which generates 76% more cooling area, 65% more airflow, and decreases 2°C on surface temperature. With the competitive performance and the CNC-milled aluminum chassis, the Creator Z Series laptops are Studio Laptops for creators, inquisitive professionals, or consumers looking for high-quality, premium products.

The Creator M16 is a more portable and stylish choice for students or creators with the need for powerful performance. It features QHD+ True Pixel displays with a 180° lay-flat screen and an ultra-light and slim aluminum chassis.

Appendix – Specifications (You can also find the full specs and pricing in the pictures below by clicking on them to view the high-res images).