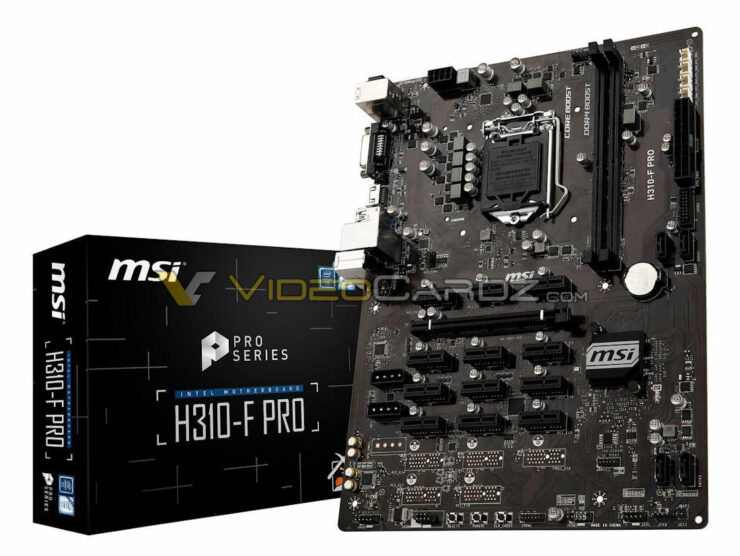 MSI is preparing to launch a socket LGA 1151, Coffee Lake supporting motherboard that's geared for cryptocurrency mining coins like Ethereum Zencash and Monero. The odd thing is many miners use older hardware and are generally not too picky on using the latest silicon for the CPU, I would imagine few and far between is the mining enthusiast that wants the latest silicon even in the CPU department of their mining setup, it's still hard to imagine anything other than the Pentium's or Celerons will ever be socketed into this motherboard

While the profitability of mining has gone down somewhat, and second hand prices are starting to drop due to less demand, many users are still mining. MSI seeks to capitalize on this with their new H310-F, lets take a look it.

While sporting a very utilitarian finish with no heatsinks on the VRM, and a tiny one on the southbridge you can tell exactly what this motherboards purpose is. In supporting Coffee Lake processors and including 1x PCIe x16 and 12x PCIe 1x slots, MSI has taken steps to reduce unneeded features as much as possible, cutting corners where ever they can since the usual jobs for this kind  workhorse doesn't really ever need more than some basic inputs and outputs. A pair of Molex connectors allows for more power to be delivered to the graphics cards employed on this motherboard a very valuable feature, and only dual DDR4 DIMM slots something that will likely never come up for the users it is intended for.

Aside from this it's as barebones and minimal as possible, packing only a single HDMI and DVI output, 4 fan connectors and basic sound connectors, and Two USB 2.0 and Two USB 3.0 ports with USB 3.1 not even being a part of the discussion. Taking a look at the pictures you can see the preparations for five more PCIe x1 slots to be added to what I can imagine to a future motherboard, since it can't handle any more graphics expansion slots. Perhaps on some upcoming motherboard that will re-purpose the design and swaps out the H310 chipset for a higher end chipset like the upcoming B360, Z370 or Z390 that will supposedly come in the summer. MSI has not given any information regarding release.