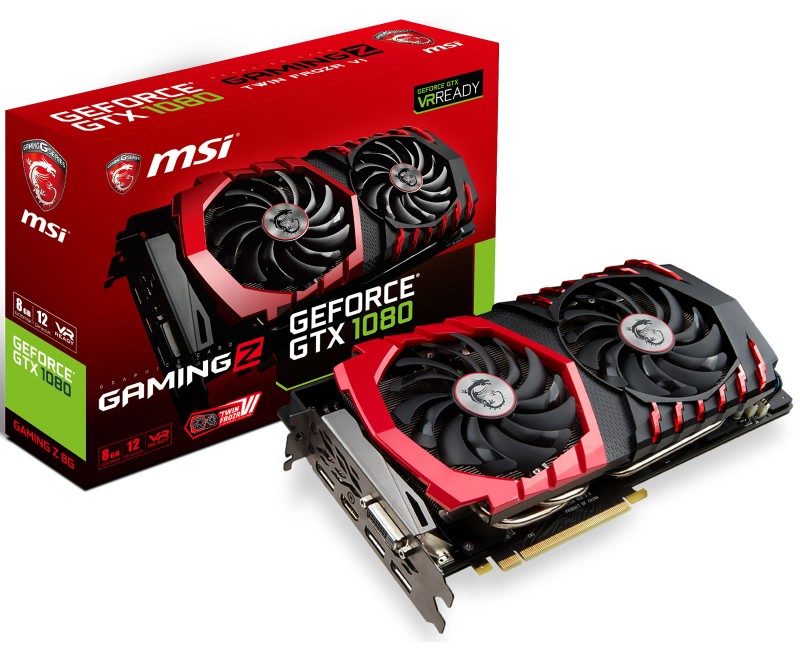 The new GPU will be taking advantage of the company’s own TWIN FROZR VI thermal design, which will effectively allow enthusiasts to take advantage of lower temperatures for a higher overclocking value, but this will also depend upon the ambient temperature too. In addition, MSI has decided to make you the center of attention amongst your PC enthusiast crew thanks to the eye-catching TWIN FROZR cooler with a fiery red GAMING glow piercing through the cover, along with the MSI GAMING dragon RGB LED on the side that can be set to any of 16.8 million colors to match your gaming rig.

Furthermore, MSI has incorporated a custom 10-phase PCB design using Military Class 4 components with an 8+6-pin power connectors that enables higher overclocking performance. Since the custom designed cooler adds more weight to the desktop GPU, the GTX 1080 GAMING Z version also sports a black solid metal back plate gives the card more structural strength, along with a nice finishing touch. The backplates are present at the rear side and beneath the custom cooler to evenly distribute the heat generated by the components.

If you take a look at the details below, MSI’s GTX 1080 GAMING Z model features a higher GPU clock speed that the GAMING X version, as evidenced by VideoCardz. While no details have been provided regarding the clock speeds for the Silent and GAMING mode, the OC mode is running the GPU at a higher clock speed compared to the GAMING X version (1708MHz base/1847MHz boost). Looking at these details, it is obvious that the GAMING Z variant will be featuring memory clock speeds than the less powerful GPU, but that also gives MSI the chance to charge a higher price tag for the price.

On Overclockers UK’s website, the prices of both GPUs have been listed below:

If you want to take a look at the detailed specifications of the GAMING Z version, we have listed them below.

Do you guys feel that the asking price is justified? Let us know your thoughts right away.